Hooray! Hooray! The first of May! 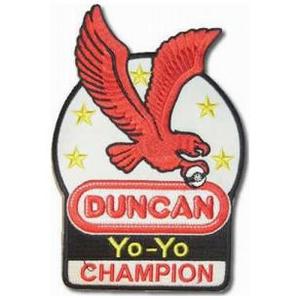 When April with its sweet showers brought flowers to the lawns of May and birds filled the air with melodies, Dan-Dan the Yo-Yo Man made his annual pilgrimage to our playground at St. Mary's School. He drove up in a dark maroon 1950 Hudson we all recognized on sight: It had the Step-Down Ride that allowed it to out-corner Fords and Chevys at the stock car races out at the fairgrounds. To own a car like that was to be a Duncan Yo-Yo professional.

Dan-Dan dismounted on the far side of the big Hudson, and when he walked into view there were already two Yo-Yos spinning in the air before him, making a whirl of red and yellow. He walked smiling toward home plate, let the yo-yos bounce off it, and snapped them on the fly into his pockets. He took out one, and rocked the baby, walked the dog, skinned the cat, made the monkey climb the string, and went around the world. Then he pulled out a Camel, lit up, and passed out flyers for the city-wide Duncan Yo-Yo contest that would be held on the stage of the Princess Theater on Main Street in Urbana for the following three Saturdays.

The marathon began with an elimination contest. Whoever couldn't do a sleeper, the easiest trick of all, had to leave the stage in shame. This first Saturday was run like a cattle call: Contestants onstage at the right, offstage to the left, keep it moving. Ushers made sure no one sneaked through twice. Survivors were given a card to show the next weekend. What if they gave the card to a buddy? The Princess didn't care. Then the buddy would have to buy a ticket. 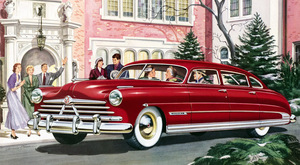 The Saturday matinee at the Princess at one time cost nine cents. This I clearly remember. Popcorn was a nickel. Candy bars were a nickel. So were bags of drops: Licorice, lemon, root beer or horehound. An all-day sucker with Mickey Mouse on it was two cents. Jawbreakers a penny. Girls would buy a roll of Necco wafers, ten cents, and share them out. Coke or Nehi Orange? At a kiddie matinee? You gotta be kidding. You gave your ticket to the usher and got your serial card punched. Eleven punches, and you got into the 12th show for free.

We raced inside and grabbed our favorite seats. Then big kids took them and told us to get lost. The interior would be flooded with light as someone let a buddy in free by the alley door. Much whistling and stamping of feet. An usher would race to collar the sneak before the door slammed and he took cover in protective darkness. Boys sat with boys and girls with girls. Sometimes older kids might be going steady. She would have his class ring around her neck, its weight ever so slightly depressing the uncanny valley between the sweet little bumps of her cashmere. If you sat behind them and said anything, you might get a knuckle sandwich. 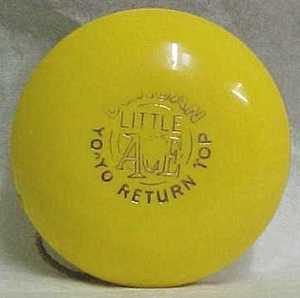 Saturdays at the Princess were a serious commitment. The show started about noon, with a card offering a $5 reward for the apprehension of vandals. Then a card reading, Ladies! Hold onto your bags! Do not place them on the seat next to you! Your cooperation will help them in not getting lost!

By this time only the girls doling out the Neccos were still in business. Even the all-day suckers were gone; they hadn't been licked, but gobbled in greed. There was a delirious fanfare, and on the screen searchlights crossed over the words, Our feature presentation. There was a rush downstairs to the boys' room. It had a semi-permanent population of underage smokers, looking like they were ready to paste you. 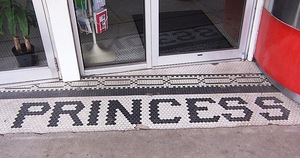 It was always a double feature: A Western and a comedy. Of the comedies, usually the Bowery Boys, the Dead End Kids or Abbot and Costello. When Bud and Lou met Frankenstein, it scared the shit out of us. Then the Western. For some reason, I have vivid memories of two enigmatic cowboys, Whip Wilson and Lash LaRue. They packed wicked bullwhips. It was incorrectly believed by some that they didn't carry guns. Untrue. They carried them, but they didn't need them, because their whip snatched your gun out of your holster faster than you could draw. In later years I wished they'd been married, like Roy and Dale. I fantasized about Whippet Wilson and Lashes LaRue.

As the afternoon came to an end, the theater, now hot and humid and smelling of sweaty T-shirts, grew quiet in suspense. Dan-Day the Yo-Yo Man strode onstage--from the steps, because there was no backstage--with twin yo-yos spinning, maybe Whistlers. The yo-yo showdown began. The second Saturday, the prizes were cartons of six Coke bottles, courtesy of the Champaign-Urbana Coca-Cola Bottling Co. on South Neil Street. Third weekend, after a surviving handful met the challenges of advanced tricks, the winner got a brand new Schwinn. I assume the Duncan company paid for this and Dan-Dan's salary out of the Yo-Yos they sold across the street at Woolworth's. What Dan-Dan did to pass the time Monday through Friday, I have no idea. 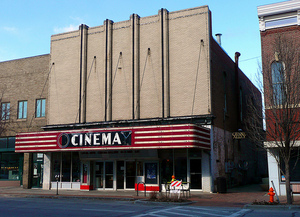 Renaming it missed the whole point (Click to enlarge)

After some lucky kid had his new bike handed down to him from the stage, we staggered out into the sunshine with sugar headaches, and went to the dime store to buy a professional Yo-Yo; those cheap red and black models would never win you a Schwinn.

But one year I lingered over a display for the Miracle Gro Garden in a Pan, and brought it home to my bedroom window sill. It was an aluminum pan like chicken pot pies came in, filled with vermiculite and embedded with eager seeds. I bathed the rootlets with water, and it brought forth young shoots, and it was spring, and everyone was in love, and flowers picked themselves.

Coming next week! Whip Wilson in Shadows of the West!

Chapter 9! Frankie and Betsy are taken to Murania!