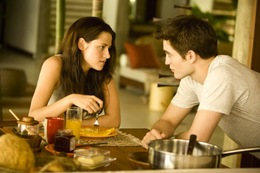 You read the word and without skipping a beat you know what it means. I am so clueless that I became aware of it for the first time in the past few days, in reviews of "The Twilight Saga: Breaking Dawn - Part 1."

The observation is made that Stephanie Meyer's best-selling series of novels is profoundly heteronormative.

Her heroine, Bella Swan, holds to a conventional belief in chastity before marriage, and when she finally weds Edward Cullen in the fourth film of the series, she gets pregnant on her wedding night and produces a child with alarming promptness.

The word, I learn, was coined in 1991. It summarizes a world view that creates a climate hostile to non-traditional sexuality. You have to give me credit. I may not have used the term, but I was right on top of the heteronormativeness of the first of the movies, "Twilight" (2008). What people don't always recall is that the person most in favor of chastity was Edward. As I wrote: "Come on now, what is 'Twilight' really about? It's about a teenage boy trying to practice abstinence, and how, in the heat of the moment, it's really, really hard. And about a girl who wants to go all the way with him, and doesn't care what might happen. He's so beautiful she would do anything for him. She is the embodiment of the sentiment, 'I'd die for you.' She is, like many adolescents, a thanatophile." 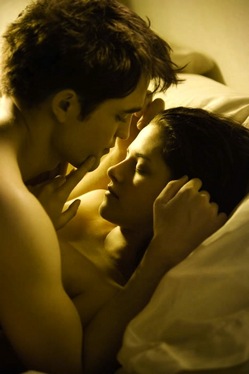 Perhaps the reason so many young women love the novels and the movies is that, like many romance movies, they're about the deliciousness of temptation. For Bella to be tempted to make love with Edward is so exciting, especially because of the risks involved. For this couple, those risks become almost maddening, because Edward is a vampire. That's why he warns her they must stay far, far apart. He loves her too much to want her to become a vampire. Now there's a gentleman for you.

She, on the other, is all too willing to surrender. As I also wrote prophetically: "She's like, I don't especially want to die, but if that's what it takes, count me in. She is touched by his devotion. Think what a sacrifice he is making on her behalf. On Prom Night, on the stage of the not especially private gazebo in the public gardens, he teeters right on the brink of a fang job, and then brings all of her trembling to a dead stand-still."

So many followers of the stories were eager to see Bella and Edward consummate their marriage that this latest film set box-office records. Yet, incredibly, we never see the events of the wedding night. The bridal chamber is a shambles on the morning after and Bella is black and blue with bruises, but we can only surmise what happened. Leaving out the main event was a wise decision by Bill Condon, the director. Imagine, if you will, Bella and Edward having passionate sex. The mind recoils. They are more ideals than real people: Beautiful, perfect, young, idealistic. We have no desire to have the image besmirched by rumpy-pumpy. 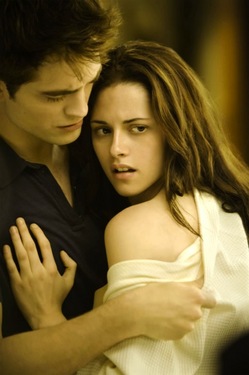 Apparently at some point during the night Edward must indeed have employed his fangs, another event more thrilling to contemplate than to witness. That's the most obvious explanation for the result that their child is apparently a vampire, although perhaps it's a matter of simple genetics, the child inheriting the father's vampirism just as it might inherit his eye color.

We can't say. How does genetics theory work when one of the partners is dead? How dead are vampires? I've always assumed that all vampires started out alive and got that way by being bitten. Can they reproduce? Can two vampires reproduce together, or must half of the couple be human? That vampires recognize the distinction is clear because in the movie "humans" are clearly referred to as being in a separate category.

The argument is made in some studies of the Stephanie Meyer's work that she embeds her own Mormon or Christian beliefs about heteronormative behavior. Chief among them is chastity before marriage. But doesn't "Breaking Dawn" make an equally compelling argument against sex after marriage? Edward was right and they should never have gotten married in the first place. The film, in fact, makes a good case for gay, lesbian, transsexual and other vampires, in that they cannot be expected to reproduce. I don't know if Stephanie Meyer thought this through, but there you have it.

Still to come is "Breaking Dawn: Part 2," a year from now. This will be quite a challenge for the filmmakers. If you've seen "Part 1" you know what I mean. This is one marriage in which the wisdom of Dr. Spock is not going to be of much use.    Postscript 10 a.m. Nov. 21: I continue to muse about the word "heteronormative." If you take it apart it seems to reduce to "normal heterosexual." Somehow the scientific nomenclature transforms that into a negative. I understand the reasons why non-hetero minorities feel discriminated against, and sympathize with them. But doesn't "heteronormative" apply the same process of blanket discrimination?

A poem by e. e. cummings: She Being Brand New.