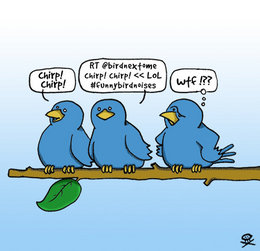 A survey by the Annenberg School for Communications polled some 1,900 subjects and asked them if they would be willing to pay for Twitter. The percent who said they would was 0.00%. I'm not sure that number requires two places after the decimal, but that's what the report said.

This seemed improbably low to me. I tweeted with the same question to my 196,000 followers on Twitter, asking them not to forward or link so that the sample would be reasonably pure. The results are shown below.

They're not great figures for Twitter. But they must be surprising news for Annenberg, suggesting their survey was

seriously flawed. If almost 20% of Twitterusers would pay something (no amount was specified), I leave it to statisticians to calculate how much higher that number is than 0.00%. 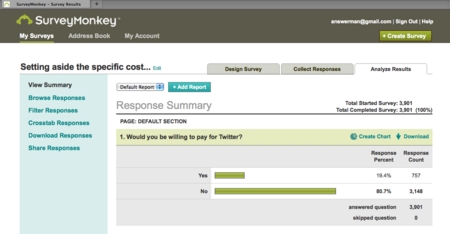 I left the comments open, and got some good ones here. Some people specified a top dollar limit. Those opposed made two good arguments (1) Twitter's strength depends on it being universal and free, so that countless witnesses can tweet from places like Teheran and Mumbai during emergencies, and (2) an overwhelming number of members are primarily followers, not dedicated Tweeters.

Heavy tweeters can spread their message, whatever it is, no matter what their motives, to an enormous potential audience. If 80% of that audience disappeared, would they lose their enthusiasm? Would most of those in Third World nations drop off the map? Comments also predicted that free clones of Twitter would spring up immediately.

Like everyone else, I've been fascinated by the ongoing mystery of how Twitter pays for itself. It's an enormous success, but how does it make money?. I found after adamantly opposing it that, once I got on board, I grew to love it. I've used it to lure visitors to my website, to make new friends, to discover high-value Tweeters, to learn immediately about breaking news, and--most of all--to have fun and kill time. 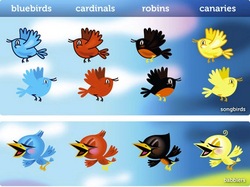 I make discoveries. One of the most pleasant is to find at least 20 enormously gifted Tweeters from India. I shouldn't be surprised. India has more English speakers than America, and has an enormous number of internet users. I found my first Indian via a retweet, followed her, and then...you know how it works. I could follow 20 times as many Indians, indeed 20 times as many Tweeters, who would reward my time.

The fact is, I simply don't have the time. I've had to do pruning to keep things manageable. When I stop following someone, that doesn't mean I don't like them. I wouldn't have followed them in the first place. It means too much is enough.

I have no idea how Twitter can pay for itself. I wouldn't mind a reasonable number of ads in my stream. There are ads on almost every other site or service on the Web. If software analyzed my (public) steam and targeted ads I would theoretically find interesting, that would make sense.

I don't have any answers. I succeeded only in proving 0.00% was too low. The Comments are open.