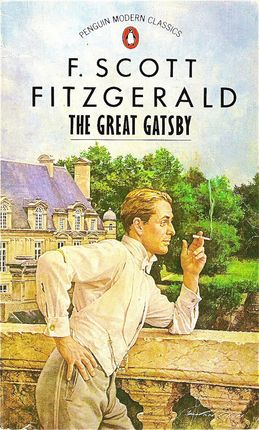 Did it seem to you that The Great Gatsby was especially difficult to read? It's a book that most American students encounter in high school. When I read it the first time, I certainly missed some of the nuances, but I didn't stumble over any of the words.

Even at the time, I noticed the particular beauty of its conclusion. After the whole doomed scenario has played out, Nick looks once again across the waters of the Sound:

Most of the big shore places were closed now and there were hardly any lights except the shadowy, moving glow of a ferryboat across the Sound. And as the moon rose higher the inessential houses began to melt away until gradually I became aware of the old island here that flowered once for Dutch sailors' eyes--a fresh, green breast of the new world. Its vanished trees, the trees that had made way for Gatsby's house, had once pandered in whispers to the last and greatest of all human dreams; for a transitory enchanted moment man must have held his breath in the presence of this continent, compelled into an æsthetic contemplation he neither understood nor desired, face to face for the last time in history with something commensurate to his capacity for wonder.

And as I sat there, brooding on the old unknown world, I thought of Gatsby's wonder when he first picked out the green light at the end of Daisy's dock. He had come a long way to this blue lawn and his dream must have seemed so close that he could hardly fail to grasp it. He did not know that it was already behind him, somewhere back in that vast obscurity beyond the city, where the dark fields of the republic rolled on under the night.

Gatsby believed in the green light, the orgastic future that year by year recedes before us. It eluded us then, but that's no matter--tomorrow we will run faster, stretch out our arms farther. . . . And one fine morning----

So we beat on, boats against the current, borne back ceaselessly into the past. 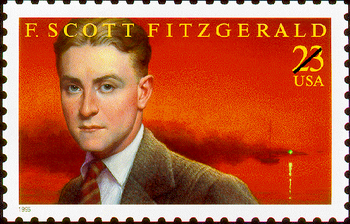 Evocative. Poetic. Perfect. Too good, in fact, for the "intermediate level" readers of the Macmillan Reader edition of the novel, as "retold by Margaret Tarner."

Gatsby had believed in his dream. He had followed it and nearly made it come true.

Everybody has a dream. And, like Gatsby, we must all follow our dream wherever it takes us.

Some unpleasant people became part of Gatsby's dream. But he cannot be blamed for that. Gatsby was a success, in the end, wasn't he?

This is an obscenity. I can hardly bear to direct you to the full text of her edition, which begins, "My name is Nick Carraway. I was born in a big city in the Middle West."

That is an abbreviation of:

In my younger and more vulnerable years my father gave me some advice that I've been turning over in my mind ever since.

"Whenever you feel like criticizing any one," he told me, "just remember that all the people in this world haven't had the advantages that you've had."

He didn't say any more, but we've always been unusually communicative in a reserved way, and I understood that he meant a great deal more than that. In consequence, I'm inclined to reserve all judgments, a habit that has opened up many curious natures to me and also made me the victim of not a few veteran bores. The abnormal mind is quick to detect and attach itself to this quality when it appears in a normal person, and so it came about that in college I was unjustly accused of being a politician, because I was privy to the secret griefs of wild, unknown men. Most of the confidences were unsought -- frequently I have feigned sleep, preoccupation, or a hostile levity when I realized by some unmistakable sign that an intimate revelation was quivering on the horizon; for the intimate revelations of young men, or at least the terms in which they express them, are usually plagiaristic and marred by obvious suppressions. Reserving judgments is a matter of infinite hope. I am still a little afraid of missing something if I forget that, as my father snobbishly suggested, and I snobbishly repeat, a sense of the fundamental decencies is parcelled out unequally at birth.

And, after boasting this way of my tolerance, I come to the admission that it has a limit. Conduct may be founded on the hard rock or the wet marshes, but after a certain point I don't care what it's founded on. When I came back from the East last autumn I felt that I wanted the world to be in uniform and at a sort of moral attention forever; I wanted no more riotous excursions with privileged glimpses into the human heart. Only Gatsby, the man who gives his name to this book, was exempt from my reaction -- Gatsby, who represented everything for which I have an unaffected scorn. If personality is an unbroken series of successful gestures, then there was something gorgeous about him, some heightened sensitivity to the promises of life, as if he were related to one of those intricate machines that register earthquakes ten thousand miles away. This responsiveness had nothing to do with that flabby impressionability which is dignified under the name of the "creative temperament."-- it was an extraordinary gift for hope, a romantic readiness such as I have never found in any other person and which it is not likely I shall ever find again. No -- Gatsby turned out all right at the end; it is what preyed on Gatsby, what foul dust floated in the wake of his dreams that temporarily closed out my interest in the abortive sorrows and short-winded elations of men.

My family have been prominent, well-to-do people in this Middle Western city for three generations. The Carraways are something of a clan, and we have a tradition that we're descended from the Dukes of Buccleuch, but the actual founder of my line was my grandfather's brother, who came here in fifty-one, sent a substitute to the Civil War, and started the wholesale hardware business that my father carries on to-day. 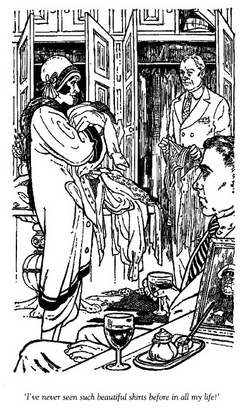 I learn that the Margaret Tarner "retelling" employs an Intermediate Level vocabulary of "about 1,600 basic words." Upper Level students can feast on 2,200 basic words.

There are so many things I want to say about this that even an Upper Level vocabulary may prove inadequate.

The first is: There is no purpose in "reading" The Great Gatsby unless you actually read it. Fitzgerald's novel is not about a story. It is about how the story is told. Its poetry, its message, its evocation of Gatsby's lost American dream, is expressed in Fitzgerald's style--in the precise words he chose to write what some consider the great American novel. Unless you have read them, you have not read the book at all. You have been imprisoned in an educational system that cheats and insults you by inflicting a barbaric dumbing-down process. You are left with the impression of having read a book, and may never feel you need return for a closer look. 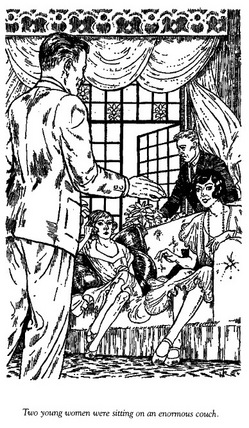 I have not read the full Macmillan Reader edition, although it requires only 67 pages. Readers of the actual novel must have been dismayed to learn that this edition with its 1,600 words arrives at the conclusion: "But he cannot be blamed for that. Gatsby was a success, in the end, wasn't he?"

No possible reading of the book, however stupid, could possibly conclude that. One wonders if Margaret Tarner was elaborating after having read the novel at a Beginner Level ("about 300 basic words").

My name is Nick. This is my friend. His name is Jay. Jay has a big house. See his house.

What depresses me is what this Macmillan Reader edition says about our American educational system. Any high school student who cannot read The Great Gatsby in the original cannot read. That student has been sold a bill of goods. We know that teachers at the college level complain that many of their students cannot read and write competently. If this is an example of a book they are assigned, can they be blamed? 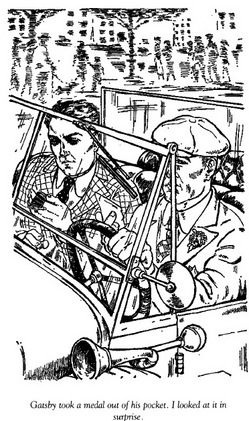 After a certain point, you teach yourself to read. You arrive at an unfamiliar word, and usually don't look it up. You sort of flow with it in the context, and in time it teaches itself to you. Consider Fitzgerald's big word "orgastic," which for years was incorrectly printed "orgiastic" because of an editing error. You've never seen it before. What, oh what, can it mean? No matter how it's spelled, it must have something to do with an orgasm, right? Am I correct in guessing that most high school students are familiar with that word?

I never read a simplified text of a novel in my life, and to the best of my knowledge neither did any other graduates of St. Mary's Grade School or Urbana High School -- not in school, anyway. The first book I read was Huckleberry Finn, and I got through it just fine, encountering hundreds of words I didn't know.

You can't become literate by being taught illiteracy, and you can't read The Great Gatsby without reading it. What would be the point? If there is a market for this book and schools prepared to assign it, a kid would be better off just cutting class and going to the school library. If there is one.

Was Jay Gatsby a success in life? (Choose one):

___ No, he met some unpleasant people.

___ Words fail me.     Note 11 a.m. 7/6: Some readers say this is an edition for students of English as a second language. The web site didn't't make that clear. If it is, my question would be: Why not have ESL learners begin with Young Adult novels? Why not write books with a simplified vocabulary? Why eviscerate Fitzgerald? Why give a false impression of Jay Gatsby?