Cannes #7: A campaign for Real Movies 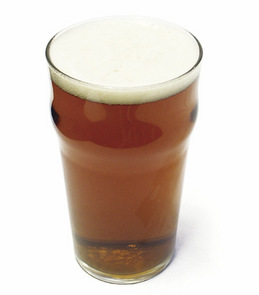 There's something in the UK called the Campaign for Real Ale. It was started in The Guardian in the 1970s by Richard Boston, a journalist (naturally) who was alarmed by traditional British pubs being taken over by mass-produced, heavily marketed, rapidly brewed beer.

The real thing, he said, was not carbonated, was brewed in its own time, and had a distinctive flavor. It was drawn up by gravity from a cooled cellar, not forced through hoses under pressure. It wasn't tweaked to make it taste like all other beers, matching some international formula like Budweiser or Heineken's. I've tasted it. It went down smoothly, and you didn't belch.

We should start a Campaign for Real Movies. These also would not be carbonated by CGI or 3D. They would be carefully created by artists, from original recipes, i.e., screenplays. Each movie would be different. There would be no effort to force them into conformity with commercial formulas.

These aren't all masterpieces, although some are, but they're all Real Movies. None follows a familiar story arc. All involve intense involvement with their characters. All do something that is perhaps the most important thing a movie can do: They take us outside our personal box of time and space, and invite us to empathize with those of other times, places, races, creeds, classes and prospects. I believe empathy is the most essential quality of civilization. 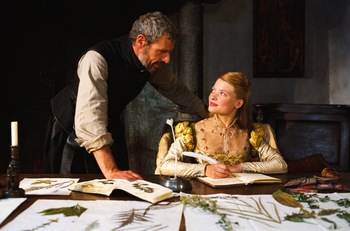 Consider the Tavernier. Here is a great filmmaker who has never made two similar films. He starts all over again every time. "La Princess de Montpensier," based on a well-known short story by Madame de La Fayette, is about a beautiful young woman who is forced by her father to marry one man although she loves another. The story is set circa 1570, when the land is aflame with religious wars between Catholics and Hugenots, and she is lodged for safety in the castle of her new husband, where a tutor is engaged to feed her obvious intelligence.

She encourages the man she loves. She deceives her husband. Her tutor, a man who deserted an army because he became disenchanted with all wars, falls in love with her. It's the kind of film where at a masked ball a confidence is shared with precisely the wrong man. But why do I say "the kind of film?" Tavernier is precise about how and why the mistake is made, and unblinking in considering its results.

Real movies are permitted to have movie stars, just like the fizzy ones. This one stars Melanie Thierry, who brings her fresh beauty to the role of a young woman playing with fire. She creates a great deal of unhappiness, not least for herself and her tutor. Tavernier makes the tutor's love truly romantic, and not a matter of conquest or persuasion, and by avoiding all the clichés of a "love triangle," he makes a Real Movie. 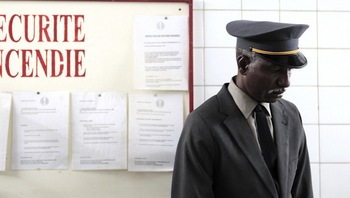 "Un Homme Qui Crie" ("The Man Who Screamed"), said to be the first feature from the African nation of Chad, is about a proud man who loses his job. Adam, tall and handsome, resplendent in his white uniform, is in charge of the pool at an upscale business hotel. Everyone calls him "Champ," because years ago he won the Central African swimming championship. A rebel group is having success in attacking government forces, stability and prosperity are affected, and he is demoted to a post as guard at the hotel's front gate and given another uniform. "The pool is my life," he despairs.

This is, of course, the same story as Murnau's silent classic "The Last Laugh," yet not the same at all. What Mahamet-Saleh Haroun does is original: He considers an African war not in terms of bloodshed and politics, but in the ways it overturns the lives of ordinary people, whose status and security hang by a thread. The film gives us a remarkable idea of Chad, like all African nations more complex than most of us realize. Adam could be my father, or yours, out of work after years of what looked like a lifetime job. 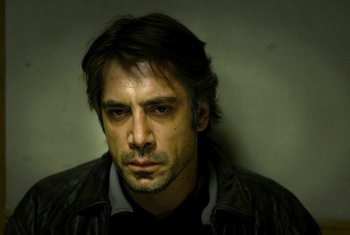 Alejandro Gonzalez Inarritu's "Biutiful" stars Javier Bardem in a virtuoso performance as a low-level criminal in Barcelona who is told by his doctor he has very little time to live. He works as a middleman in an industry which makes fake luxury items in sweatshops and sells them to tourists via sidewalk vendors. You've seen the Gucci bags lined up on pavements.

Uxbal's life is a mess. He is separated from his bipolar wife. He tries to care for the sons he loves. He is under urgent pressure from his criminal associates; he helps supply illegal Asian immigrants for the sweatshops. There is blood in his pee. He works in crime, but is not a bad man, and indeed under sentence of death he is moved, like the hero of Kurosawa's "Ikiru," to try to do something good.

One gesture he makes ends in tragic consequences. Uxbal made the gesture, but also tried to make some money on it. He's devastated. Inarritu follows his last days with great intimacy, burying his camera in the seamy street life Uxbal lives, introducing many characters in sharp and colorful relief. He grants his characters the dignity of having feelings and reasons, and not simply behaving as mechanical inhabitants of a crime plot. Bardeem is a possibility for the festival's Best Actor award. 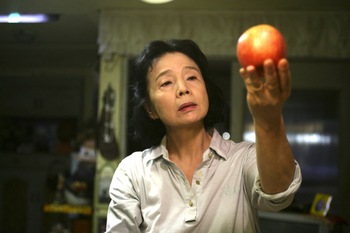 "Poetry," by Lee Chang-dong, tells the story of a South Korean woman (Jeong-hee Yoon) who learns that her son was involved in a rape with five classmates. The girl committed suicide. Shortly before discovering this, with great shyness, she signs up for a poetry class, and makes some new friends who encourage her to find beauty everywhere; has she ever really looked at an apple?

She works a few days a week as a caregiver for a rich man whose right side has been paralyzed by a stroke. She begins to meet with the fathers of the other five students. They talk about raising funds to buy off the mother of the dead girl. And she writes some poems. All of these strands come together and illuminate each other, in a film that never takes its eyes off her for long. The film contains certainly the most poignant badminton match I can imagine.

Among other Real Movies at Cannes this year, I wrote about "Another Year" and "The Housemaid" earlier. "Robin Hood," which opened the festival was, sadly, carbonated, and pumped into theaters under pressure.