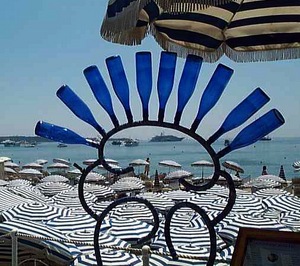 I want things to stay the way they always were. This is insane, because they weren't that way in the first place. I see friends who have grown older, and want them to grow younger.

In Cannes, I look around and see a new building where an old one was. A new franchise store where once there was a bookshop, or a little cafe, or a woman who thought she could make a living selling flowers.

Here was a store where I bought my papers every morning, and Tintin comics so I could improve my reading French. Now it is a Häagen-Dazs, which has splendid ice cream but is a company name made of words in no known language.

I would take my newspapers to a little cafe nearby named Le Claridge. That was when all the action in Cannes was down at the other end of the Croisette, huddled in the shadow of the old Palais. Now there is a new Palais. The dusky wooden interior of Le Claridge, where you can imagine Inspector Maigret ordering a beer and filling his pipe, is a bright new brasserie, stainless steel and glass, no smoking. In the old days you could read your paper and be left alone.

I have to stop thinking like this. It will turn me into a disgruntled old man before my time. People tell me Carl Fredericksen, the grumpy hero of "Up," looks like me. Like me? That old blockhead? I was thinking of myself more as Russell, the plucky kid who kept ringing Carl's bell and insisting in helping him across the street. I was forever driving the neighbors crazy with my retail obsessions. I'd be ringing their doorbells selling greeting cards, magazine subscriptions, the World's Finest Chocolate, even midget fire extinguishers for next to the stove, ferchristsakes. What other 11-year-old do you know who subscribed to Successful Salesmanship magazine? Now I'm the old fart in "Up" who doesn't want to move to make way for skyscrapers? 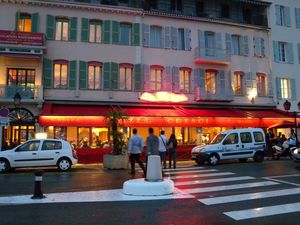 I look around this town or every town I know, and it's as if architectural shape-shifters have been operating overnight. No wonder "Dark City" rang a bell. Low becomes high, old becomes new, quaint becomes crass, tradition becomes the future of Tomorrowland. It's getting to where the oldest thing you can find is a monorail. Disney World may tear theirs down and replace it with traffic congestion. On the pedestrian market street in Cannes, I want that little rubber stamp store to still be there. You never know. I may have to buy some more rubber stamps. I got a handsome stamp there once in the shape of an upturned thumb. In those days I sent out snail mail. I rubber-stamped my envelopes with the thumb up, and they were all Returned to Sender. Funny. That's what thumbs down means.

One of my difficulties is that often enough I like the new things. When the hulking new Palais was constructed, the old Palais stayed standing for a few years, housing the Director's Fortnight. The old Palais was a decent ugly building, looking like it could have housed the Congress of Workers in a soviet state. The new Palais was immediately nicknamed the Death Star. "A machine-gun emplacement," declared the architectural critic Billy (Silver Dollar) Baxter. Then the old palais was torn down and replaced by an indecent ugly building, the Noga Hilton ("the Naugahyde Hilton," said Billy). One-upping the old Palais, the Noga located the Directors' Fortnight in a subterranean cavern, so far down there were seven flights of echoing concrete stairs to scale after a movie before you were disgorged into daylight. There were elevators, but moviegoers couldn't use them; we were barred by security guards ("gorillas") employed at great expense to prevent sensible people from doing logical things. 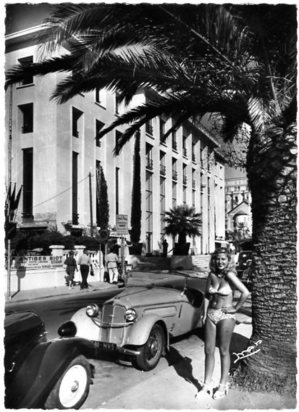 Now I actually like the new Palais, which is approaching 30. The Theater Lumiere, with 3,000 seats, is the best place in the world to see a movie. The sound is so good it's almost disturbing. In the old palais, I saw "Apocalypse Now" and the helicopter gunships seemed to roar overhead while the "Ride of the Valkyries" played. Today in the new palais, I saw Jane Campion's "Bright Star," the story of John Keats and Fanny Brawne, and when Fanny fell under the spell of Keats' romanticism and started a butterfly farm in her room, I could hear their little wings fluttering.

I had a bit of an adventure today. We were walking over to the American Pavilion, behind the Palais, and thought to use an interior shortcut that bypasses three blocks of crowds and barricades, and aims directly from the front of Palais to the left side rear of the building. This passage was built for pedestrians. Gorillas had locked the doors with padlocked chains. You might also think to go up an escalator and walk through the lobby of the Theater Lumiere and down the steps on the other side, but of course that's also forbidden. We asked instructions, but no one employed in the building knows how to get out of it. Maybe that's why they keep their jobs.

Before the morning projection, they played the same tape they're been using for years, asking people to turn off their cell phones. I happen to know that the warm, rich voice belongs to Mrs. Storer, who with her husband runs the Cannes English Language Bookshop, on the well-named rue de Bivouac Napoleon. I hope she still runs it, that is. Last time I was there, they were looking to sell it. If they have succeeded, whatever is at that address is almost certainly not another English language bookshop.

Behind the old Palais, on the rue d'Antibes, there stood for years Le Petit Carlton, a brasserie that was the headquarters of the Left Bank of Cannes. There the New Wave got plastered and issued its manifestos. There, night after night in the 1970s, Rainer Werner Fassbinder could be seen after midnight with his coterie, dressed in leather, denim, ambition and discontent. It was only a small, inexpensive street-corner hangout. But the first time I went to Cannes, Michael Kutza, founder of the Chicago International Film Festival, briefed me it was the place where the action was. A thousand movies were launched or torpedoed there. Now it is gone, replaced by some god-damned boutique. 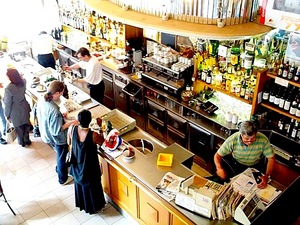 And on and on. And not just in Cannes, but all over the world. In these days, traditional values have been replaced by bottom-line values. The pleasure of people who live in a place is second to the pleasure of people who invest there. In Billy Baxter's "Diary of the Cannes Film Festival" TV special, Rex Reed's narration tells us a "quaint Mediterranean fishing village is transformed once a year by the Cannes Film Festival." These days, a major Mediterranean tourist and shopping center is replaced once a year by the quaint festival.

Juliette Binoche was so very young in 1985:

Five tips for enjoying Cannes for the very, very clueless.