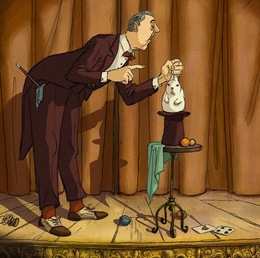 I walked into Cinema Arcades, behind our hotel, for a Cannes market screening of "The Illusionist" and saw the magically melancholy final act of Jacques Tati's career.

Tati of course was the tall Frenchman, bowing from the waist, pipe in mouth, often wearing a trench coat, pants too short, always the center of befuddlements.

If you've seen "Mr. Hulot's Holiday," you know who he was, and if you haven't, it belongs in your holding pattern.

Tati, who died in 1982, wrote the screenplay for this film, but never made it. He intended it for live action. His daughter Sophie Tatischeff still had the script, and handed it to Sylvain Chomet, who made the miraculously funny animated film "The Triplets of Belleville" (2003). He has drawn it with a lightness and beauty worthy of a older, sadder Miyazaki story. Animation suits it. Live action would overwhelm its fancy with realism.

The story involves a magician named Tatischeff who fails in one music hall after another, and ends up in Scotland, where at last he finds one fan: A young woman who idealizes him, moves in with him, tends to him, cooks and cleans, and would probably offer sex if he didn't abstemiously sleep on the couch. He's a good magician on a small scale, flawless at every trick except producing a rabbit from a hat. His problem there involves his frisky rabbit, which likes to sleep on Tatischeff's stomach at night. The rabbit makes it a practice during the act to pop up and peep around at inopportune moments. 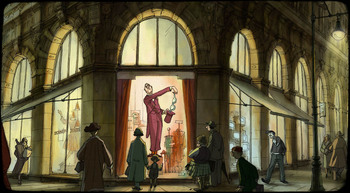 Tatischeff finally ends up in Edinburgh, a city I think has never looked more bleak and beautiful in a film. Time has passed him by. Audiences prefer pop groups to aging magicians. He reaches the lowest stage in his career, performing in a shop window. He remains quiet, reflective, almost indifferent to the girl (although he buys her a pretty frock).

If you recall the opening scenes of "Up," you know that animation is sometimes more effective than live action for conveying the arc of a life. This man does what he does very well, but there's no longer a purpose for him. Did Tati feel the same when he wrote this in the 1950s, before "Hulot" was a world wide success? 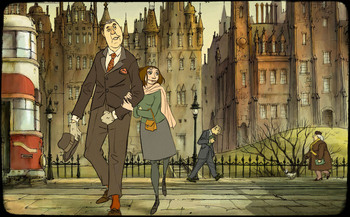 Important to the charm of "Illusionist" is the grace with which the character of Tatischeff has been drawn. He looks like Tati, but much more importantly, he has the inimitable body language. The polite formality, the deliberate movement, the hesitation, the diffidence. His world is an illusion, which he produces nightly from a hat. 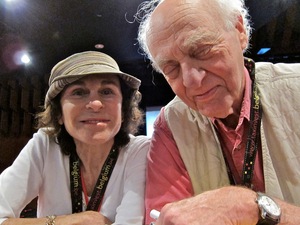 "Definite Palme d'Or possibility," Toby Talbot told me. "Definite," Dan Talbot agreed. We'd all just come from the screening of the Official Competition selection "The Housemaid," by Sang-soo Im of South Korea. You hear predictions like that three times a day at Cannes. When it comes from the Talbots (above) it means something. Dan Talbot founded New Yorker Films in 1965; starting even earlier the Talbots ran the beloved New Yorker theater in New York, and if you've seen classics by Herzog, Fassbinder, Godard, Wadja and Bergman, chances are they came from New Yorker. They're been coming to Cannes longer than I have, and they have a feel for these things. 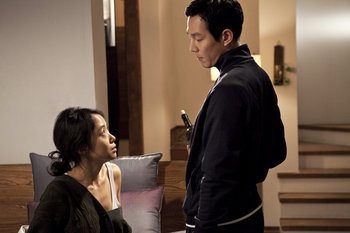 "The Housemaid" is extraordinary, further evidence that right now South Korea is producing many of the best films in the world. It takes place almost entirely within the huge modern house of a very rich man, and centers on the young woman he has hired as a nanny. It involves the man, his wife, his daughter, the older woman who runs his household, and the mothers of the wife and the nanny.

This is a house where living is an expensive form of art. The couple are smooth, calm, sophisticated. They value themselves very highly. The nanny forms a bind with their 7-year-old daughter, and assists the wife during a pregnancy with twins. More than that I choose not to specify.

But look at the mastery of the film's construction. The nuanced performances. The implacable deliberation of the plot. The way the house acts as a hothouse to force the growth of anger. And the film's unforgiving portrait of people damaged by great wealth. This is a thriller about the ideas people have of themselves. 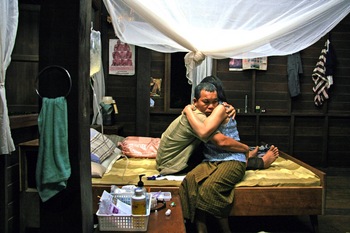 "Chatroom," an official selection in the Un certain Regard section, is a virtual thriller, so to speak, by Hideo Nakata. Set in the UK, by the director of "Ring" (1998), it's about a group that gathers in a chat room where the dynamics could lead to a suicide. The internet is suggested with an evocative set: A corridor crowded with people who may or may not enter various rooms (websites) along the way. In these rooms, their virtual relationships form. Then Nakata cuts to real life to observe where they lead. The film is ather frightening in the way it portrays some of the possible consequences of the online life.

Here it is Friday and Cannes is still relatively quiet. Maybe the usual weekend crowds will appear, but they'll be tourists. What I notice is that some of the screenings have more empty seats than you'd expect, and the after-screening crowd at the press mailboxes doesn't seem as big as usual. It's probably too early to draw any conclusions, just as it's early to predict the Palme winner. But not too early to speculate. Toby Talbot's fond and lively memories of a great art theater, The New Yorker Theater and Other Scenes from a Life at the Movies.