Bless me Father, for I have sinned 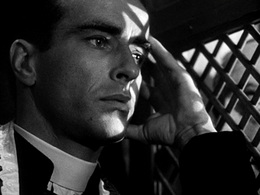 I have no way of knowing Robert McNamara's thoughts in his final days. He might have reflected on his agreement to speak openly to Errol Morris in the extraordinary documentary "The Fog of War." His reflections are almost without precedent among modern statesmen and those involved in waging war. Remembered as the architect of the war in Vietnam, he doesn't quite apologize for not having done more to end that war--although he clearly wishes he had. His purpose in the film is to speak of his philosophy of life, to add depth to history's one-dimensional portrait. Don't we all want to do that?

"I have no regrets," Edith Piaf sang. It is clear that she does regret. She is singing of love, not war. I think she is saying that she and her lover did the best they could. If she can say that, she need have no regrets. McNamara is saying the same thing about his years in power. He is honest in reporting a discussion at the time about leaving as Johnson's secretary of defense. He told Katharine Graham, publisher of the Washington Post, "I don't know if I resigned or was fired." "Oh, Bob," she told him, "of course you were fired." One of the things he tells Morris is: "In order to do good, you may have to engage in evil." That argument is denied by theologians, but much heard in realms of realpolitik.

He agreed to submit himself to Morris's questions for an hour. He ended by speaking for ten. He went to subjects Morris might not have thought to take him, discussed things that were, at 85, much on his mind. He was a key aide to Gen. Curtis LeMay, who directed the fire-bombing of Tokyo when more than 100,000, mostly civilians, were burned alive. After the war, he says, in one of the film's most astonishing moments, LeMay observed to him that if America had lost, they would have been tried as war criminals. What does he, McNamara, think about the bombing? By quoting LeMay's statement that might have forever gone unrecorded, I think he lets us know. 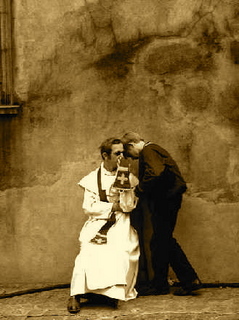 It is a human impulse, the need to confess and seek redemption, or to justify and seek understanding. Only monsters with damaged minds commit evil with a clear conscience. What did Hitler think as he died? Stalin? What do mass murderers think? What did H. H. Holmes think? He was the serial killer who constructed soundproof tombs in the basement of his Chicago building to entrap helpless women, broil them alive, dissect their bodies, and sell their bones. What did he think? I have no idea.

Such people are beyond understanding. I cannot usefully discuss them. I'm thinking of the rest of us. Don't we all have something to feel ashamed of? Things we regret? Hemingway famously said, "What is moral is what you feel good after, and what is immoral is what you feel bad after." Of course we don't all feel bad after doing the same things. Did the masterminds of Enron feel immoral as they robbed pension funds or created a fake energy crisis? Perhaps not; perhaps they thought they were performing a greater good by maximizing corporate profits. Those on all sides admired them. I believe Bernie Madoff, on the other hand, really and truly felt badly about what he had done to people who trusted him. He finally seemed compelled to confess, and went almost willingly to prison. I wonder if in some sense he may feel better right now.

Why do politicians come forward to speak, and speak and speak, of their infidelities? Perhaps because after the struggle to preserve a false image, they are relieved to come clean. Our society has a public ritual of abasement they go through, invariably with loyal spouses at their sides. Do their spouses identify that deeply with their offices and campaigns? They too have invested much of a lifetime in campaigning. They want to seem forgiving but not wrong. Elizabeth Edwards knew her husband was sitting in a time bomb. Why did they decide to continue his campaign? What were they thinking?

In our public confessional, people come forward to describe their sexual misbehavior, their substance abuse, their addictions. They very rarely confess to financial sins, because in our culture there are so many justifications for behavior relating to money. The latest Papal encyclical advises fair dealings between workers and employers, and frowns on the idea of profits above all. Many of those who applaud the Pope's position on other issues will not rush to follow him on those teachings. The Prosperity Gospel has nothing to do with the teachings of Jesus, and in the Bible it was the rich man, not the adulterer, the prostitute or the drunkard, who could not easily pass through the eye of the needle. 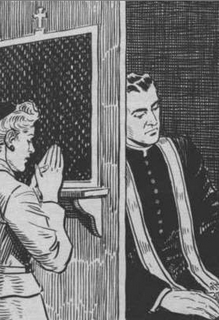 Most successful programs of personal redemption involve the process of moral inventory, the acknowledgement of failings, the seeking of forgiveness, and acts of amends. That is the template for Alcoholics Anonymous, the source of all modern recovery systems, and explains why they work so much better than alternatives like psychoanalysis, drug replacement therapy, religious vows or legal punishments. At some point people feel the need to say: I am the person who did it, I harmed myself and others, I must acknowledge that, I must repair the damage to myself and those I hurt. If those who want to recover are not prepared to bite that bullet, their chances are not good.

Many religions incorporate that process in their rituals, including the Catholic sacrament of Penance, the Protestant service of Reconciliation, Quaker testimony, and so on. Apparently some form of literal public confession, if only to one other person, is necessary. Those who claim "it's a matter between me and my god" are usually evoking a very understanding deity.

On the other hand, a rush for public absolution can be dangerous. Here again AA is wise. Recovering alcoholics are advised to remain anonymous not because of shame but because of pride. All too many of the newly clean or sober are quick to announce their new status, with dangerous results. By taking credit for their sobriety, they think they have in some way conquered their addiction, and are not really admitting defeat. If they relapse, as the famously-saved so often do, they set a poor example. The public thinks they failed when they didn't really try. 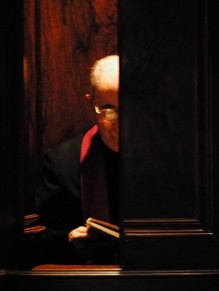 Press agents who check their famous clients into rehab and immediately call a press conference should be drummed out of Hollywood. Oprah Winfrey, Confessor-in-Chief to America, doesn't encourage celebrities in their publicity-seeking cleansing rituals. She knows a lot more about recovery than Dr. Phil, who likes to bring out the owner of a rehab clinic and tell a squirming addict, "You're going away for 30 days--or else." No knowledgeable person involved in rehabilitation would come within a mile of a stunt like that, giving a free stay in exchange for publicity and making a suffering addict the excuse.

Enough of substance abuse. What about sexual misconduct? Here the question becomes: Who is being helped and who harmed by a confession? It may make you feel great to tell all to your spouse, but how does it make your spouse feel? There is a folk saying, "You have to know draw a line between the full truth and full disclosure." Yes, a spouse may agree to accept your failing and work with you to repair the damage. No, the spouse doesn't want to hear about what a wonderful person you cheated with--a person with problems of their own, who you pitied and thought you could help, etc. I think such speeches are more wounding than just saying you wanted to get laid. In any confession lies the danger of hurting your confessor. A priest as a wise third party is useful.

The films of Ingmar Bergman are filled with people compelled to confess. Sometimes those scenes can be luminous, as when the couple in "Scenes from a Marriage" and its sequel "Saraband" speak to each other openly and honestly, in a spirit of mutual acceptance. No confession in Bergman is more wounding than the one in "Winter Light" made by Thomas, the pastor, to Märta, the woman he had an affair with. What possible reason would he have for telling her such vile and hurtful things about herself? He is a sanctimonious sadist. 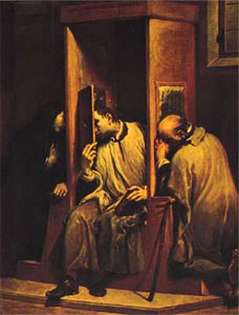 Bergman's most confessional film is one he wrote but didn't direct, Liv Ullmann's "Faithless" (2001). It is also his most autobiographical. On the island where he lived, in his own house, behind his own desk, a character named "Bergman" engages in a conversation with a woman from his past--a woman he treated badly. Bergman's behavior with women, including Ullmann herself, was sometimes morally questionable, and here, by coming to grips with his faithless conduct, he seems to be seeking to clear his conscience.

The film premiered at Cannes 2000, and when I discussed it with Ullmann, I told her it reminded me of the sacrament of confession. "I'm sure that's what Ingmar wanted," she said, "although he would never say those words. But I would say those words. This is not the first film Ingmar has made about values, about loving and losing and passion. Every film he has made has been about that, in different ways. I think it is brave of a filmmaker to be able to do that again and again. Maybe he's telling it for the last time. Maybe he sees this story as his life, and he's told it, and it's over. If he writes something again maybe it will be about endless love."

Of the films I've seen, I think the one with the most heartfelt treatment of confession is Carlos Reygadas' masterpiece "Silent Light" (2007), set in a Mennonite community in Mexico. All of his characters are deeply, sincerely, observant believers in the teachings of their church. Johan, a farmer with many children falls helplessly in love with another woman. He knows this is wrong. She knows it is wrong. They know this is the only time in their lives either one of them will feel true love. Eventually he confesses to his father, who is also his pastor. His wife is grievously, perhaps fatally, hurt. Everyone comes right in the eyes of their church--but in each other's?

Years ago I heard of a confessional phone line. You could call a number and confess anything to a stranger. I understand the appeal of this idea, but doubt its utility. People walk around carrying guilt that makes them feel worthless or devalued. It is grievously damaging to believe you are bad, or are a person who has done bad things, if only to yourself. I think you have to heal by confessing to yourself, and then to another person you deeply respect (whether also to God is a matter of personal belief). You have to try to do that so as not to cause unnecessary pain. You cannot do it simply to get yourself off the hook, but to accept the responsibility, pay the price and make what amends are possible. You will feel better after you do. According to Hemingway, that makes it a moral thing to do. I believe Robert McNamara felt some consolation on his deathbed.

From "Silent Light," the man who sinned, and the wife and children he loves.

My discussion with Liv Ullmann about "Faithless.".

Sunrise in the seven-minute opening shot of "Silent Light." 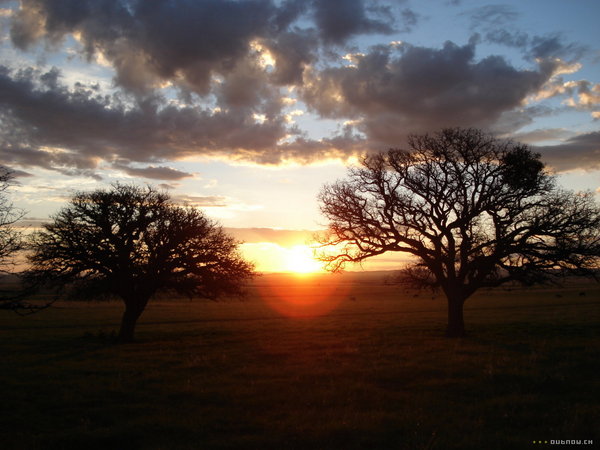