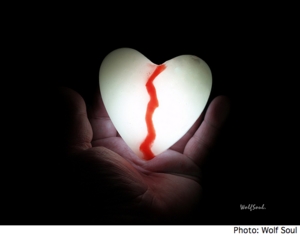 Every time I see a dog in a movie, I think the same thing: I want that dog. I see Skip or Lucy or Shiloh and for a moment I can't even think about the movie's plot. I can only think about the dog. I want to hold it, pet it, take it for walks, and tell it what a good dog it is. I want to love it, and I want it to love me. I have an empty space inside myself that can only be filled by a dog.

Not a cat. I have had cats and I was fond of them, fonder than they ever were of me. But what I want is unconditional love, and therefore I want a dog. I want to make its life a joy. I want to scratch behind its ears, and on its belly when it rolls over. I want to gently extend its tail so the dog can tell it's a fine tail indeed. I want to give it a shampoo, and sneak it bites from the table, and let it exchange the news with other dogs we meet on the street. I want it to bark at the doorbell, be joyous to see my loved ones, shake hands, and look concerned if I seem depressed. If I throw a ball I want the dog to bring back the ball and ask me to throw it again.

If you've read John D. McDonald's Travis McGee books, you'll remember Meyer, the hairy economist, who lived on a neighboring houseboat. He went to dinner with some new boat-owners at the Marina, and when he got back McGee asked him what they were like.

"They were bores," Meyer said. "Do you know what a bore is?"

"A bore, Travis, is someone who deprives you of solitude without providing you with companionship." 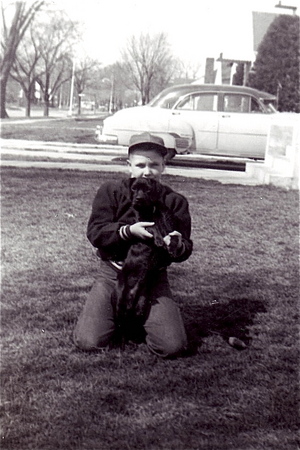 For me, that's the problem with cats. If they follow me all over the house, it's not because they want to play, it's because they think something edible might turn up, or that I will entertain them. If these prospects seem remote, a cat will simply stay where it is, idly regard me as I leave the room, lick itself a little, and go back to sleep.

I had cats named Orange Cat and Sports Fan. They were swell cats and all that, but they could take me or leave me. After we got married, Chaz confided that she did not enjoy the cats jumping on the table during dinner and staring intently at her plate.

"They won't grab anything unless you leave the table," I said.

I realized that one of the peculiarities of women is that they don't want their dinner anywhere near inquisitive little paws that have been busy in the litter box. Men aren't like that so much.

I never met a dog that didn't beg at the table. If there is a dog that doesn't, it has had all the dog scared out of it. But a dog is not a sneak thief like a cat. It doesn't snatch and run. Only if presented with an irresistible opportunity. It is a dinner companion. It is delighted that you are eating, thinks it is a jolly good idea, and wants to be sure it's as delicious as you deserve. You are under a powerful psychological compulsion to give it a taste, particularly when it goes into convulsions of gratitude. Dogs remember every favor you ever do for them, and store those events in a memory bank titled, Why My Human is a God. 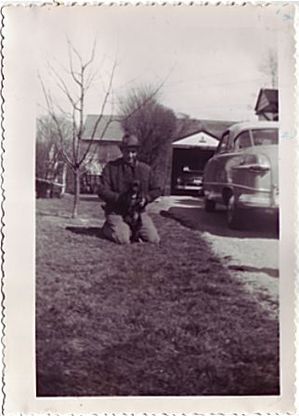 I can hardly pass a dog on the street without wanting to pet it. If you first let them slowly smell your hand, they'll usually let you. Some guys will admire a babe's dog so they can chat her up. With me, it's strictly a matter of getting to know the dog. Quality time with a dog calms me and makes me feel content. On my way to writing about this, I came across an article from Salon that explained this phenomenon. Friendliness between Man and Dog releases a chemical into both the human and canine blood streams, which is why they both like it so much. The chemical is named oxytocin. You're already ahead of me: Yes, reader, that is the chemical associated with the emotion called Elevation.

My dad and Blackie

I had two dogs when I was a boy, Blackie and Ming. They had those names because the Dominican sisters told us dogs didn't have souls, and so it would be a sin against the Holy Ghost, I think it was, to give them a saint's name. This sent me racing to the encyclopedia, because I had never heard of a Saint Roger, although probably it would seem strange to name a dog after yourself. You wouldn't want your mom shouting through the screen door for the whole neighborhood to hear: "Roger, get your nose out of that garbage and get back in the house!" Luckily, there was a Saint Roger Niger of Beeleigh Abbey, so the question didn't arise. He was consecrated Bishop of London in 1229, so that was good. Blackie was half beagle and half spaniel. Ming was a Pekingese. But not a toy Pekingese, I hasten to add. He was a good-sized dog, earnestly dedicated to chasing things, chewing things, and barking at everything that could not be chased or chewed. You know how you associate certain memories with books? I can never look at Oscar Lewis's Children of Sanchez without observing that Ming chewed a good half-inch off the spine. 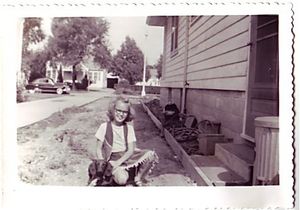 On Ming I lavished the attention that Blackie was denied. The tragedy of Blackie was that he was not allowed in the house. My father wouldn't allow it. This was not because he disliked Blackie. "Boy," he said, "you picked a bad time to bring a dog home. We've just Installed Wall-to-Wall Carpeting."

Jackie Yates and her dog Snooker

Somehow you could hear that the phrase was capitalized, right down to the "I" in "Installed." Wall-to-Wall Carpets were a big deal in the late 1940s, along with picture windows, always referred to as Big Picture Windows. You can see we were up to date at our house. But it is the nature of a dog to take an interest in carpets, and the threat to Wall-to-Wall Carpeting was particularly alarming, because If Anything Happened to It We'd Have to Tear the Whole Thing Up.

So Blackie lived in our back yard, and for a blessed summer we were a dog and his boy, running all over the neighborhood--for dogs and boys ran free in those days. He went to baseball games with me, and chased after my bike to Harry Rusk's market, and we went to the park. He knew all my friends. Blackie had an active circle of his own friends, including his brother Pepper, who lived next door at Karen Weaver's house, and his pal Snookers, a dachshund who lived one door down on Maple Street with Jackie Yates. 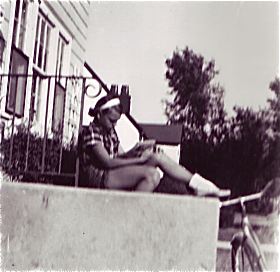 Then autumn leaves began to fall. Soon it was winter, with early snow on the ground. I was back in school. Pepper and Snookers went to live inside. As a shelter, Blackie was given my old playhouse in the back yard, with a dog house inside and blankets on the floor. "He'll grow his winter coat," my dad said. But Blackie spent long days and nights cold and lonely, and I was acutely aware of this. Blackie would hear the sound of the school bus and start barking for me, and I would run out to the back yard to comfort him, for he would be sobbing. "I'm sorry, Blackie boy. I'm sorry." My heart was breaking, but I couldn't stay out there forever. When I went indoors and stood over the hot air register to thaw out, I felt torn up inside. I had betrayed him. But I could understand that my father had a point. Maybe that's why "Shiloh" hit me so hard.

I showed "Shiloh" one year at Ebertfest, and our guest was the great actor Scott Wilson, who plays the reclusive squirrel-hunter who is so mean to Shiloh. After the movie, we invited kids from the audience up on the stage. A little girl timidly asked Scott, "Mister, why are you so mean?"

Scott could have replied by explaining how he was only an actor and it was only a role. He showed what a perfect instinct he has. He said, "Honey, I just don't know. But I learned my lesson."

A few weeks into Blackie's exile, Jackie Yates' father, a nice man, mentioned to my father that Blackie howled half the night under their bedroom window. I knew this was the truth, because his lonely cries kept me awake. Sometimes I would open the storm window and call out "It's okay, Blackie boy." But I knew it wasn't okay, and my voice only inspired more laments. I tried peeking out from behind my curtain. Sometimes in the moonlight Blackie would be standing outside his little house, gazing reproachfully at my window. Through the bedroom door at night, I heard snatches of conversation from the living room: never stops barking...the boy...the dog...Roger loves that dog...I know, I know...Bob Yates...keeps me awake, too... 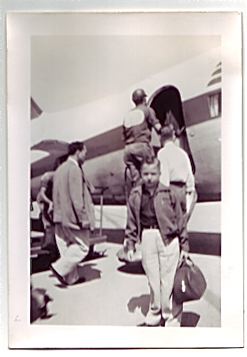 It was announced that my Cousin Bernardine in Stonington had invited me for a visit. That meant my first airplane ride, in an Ozark Airlines DC-3 to Decatur. When I returned, we sat in the car at the airport and my mother said, "Your father has something he wants to tell you," and I knew what it was and my heart cried: Blackie! Blackie had run away from home. Ten blocks from 410 E. Washington Street, he ran out in front of a car driven by Enos Renner, husband of my mom's best friend Frances. The Renners called her after reading his dog tag.

Boarding the flight to Decatur

I sat in the car and knew this was a lie. Something broke inside of me. What was Blackie doing ten blocks away from home? Why had he conveniently been struck by a car driven by a witness we already knew? At home I fell on my bed and wept, and knew that Blackie had not been killed, not by running under Enos Renner's wheels anyway, and he might be crying for me at that moment at the Dog Pound. Or he might be dead.

That is the Blackie story. Ming died of battle injuries. He jumped from my bed to snap at a fly, fell wrong, and broke his back. His hind legs were paralyzed. My friend Hal Holmes suggested maybe we could make him a little cart to haul himself around, but we both knew that wouldn't work.

I would have been about 20 then. So I have been 45 years without a dog. It never seemed like it would be fair to the dog. I was always going out of town on trips, I got home late, meals would be missed, there was no one to walk it, and on and on. These days it just plain doesn't make sense. Chaz has her hands full taking care of me. That's the way it is. It just doesn't work out that I can have a dog. But there's still an empty space inside of me, about the size of Blackie.

A dog can be a real help in your work.

The closing scenes of "My Dog Skip."

Scott Wilson as the mean man in "Shiloh."