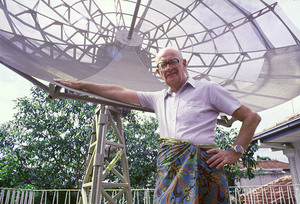 No teenager could possibly have hurried more eagerly to an Elvis Presley concert on that day in the late 1950's when I led a delegation of the Urbana High School Science Fiction Club to attend a speech on the campus of the University of Illinois. The speaker was Sir Arthur C. Clarke, our hero not only for his great science fiction, but also for such concepts as the triangulated space satellite and the "space elevator." The first has paid off already with global communication. The second is still seriously proposed as using infinitely strong strings of Buckyballs to link earth to a space station.

Clarke was erudite, witty, friendly, and signed all my books. It was years later that I met him in connection with his screenplay for "2001: A Space Odyssey," still the greatest of all science fiction films. And years after that when I began receiving reproaches from his home in Sri Lanka that he had not received his quarterly update to the Cinemania CD-ROM. Cinemania, edited by Jim Emerson (now editor of this site), linked reviews, info and bios of movie people with the reviews of such as Pauline Kael, Leonard Maltin and myself. 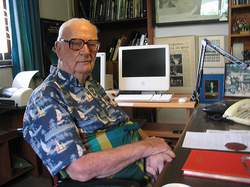 It was a brilliant idea and became for a time the top-selling consumer CD, but Bill Gates was correct that the future of CDs was on the Internet, as the Internet Movie Database so abundantly proves. Also, IMDb got its content for free, and Cinemania actually paid for its reviews.

I explained sadly to Sir Arthur why there was not and never could be another update of Cinemania, but he died at 90 still unconsoled, and still writing indignant notes to Gates.

He was the most diligent of Answer Man sources. Once one of my reader's complained that in the vacuum of space he should not have been able to hear a tiny "click" when the astro-stewardess grabbed a floating ballpoint pen.

Clarke invited two friends, one a space expert, the other a blind friend with acute hearing, to listen for the click. Just as he thought, he said, there was no click.

Clarke was in the great tradition of classic science fiction -- converted by his first sight of Amazing Stories magazines, welding hard science speculation to robust adventures, and adding some whimsy in the form of "Tales from the White Hart." He died convinced Bill Gates had made a big mistake in not keeping the Cinemania CD-Rom in print.