An affront to the eyes of God 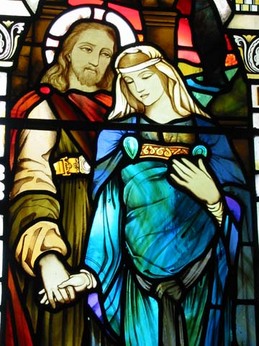 "Mary, give me one of your Kleenexes," my mother told my aunt one morning long ago when we were entering Holy Cross Church. She held a bobby pin in her lips, reached up to part her hair, and fixed the Kleenex on top of her head. My Aunt Mary already had her handkerchief in place.

"Because we are going into the house of the Lord," my mother explained, "and we have to spare him from the sight of us."

It must have been a Holy Day of Obligation. That would explain why we'd gone across town to attend Holy Cross with Mary instead of going to our own church, St. Patrick's. I can speculate that it was a day off, and after Mass they were going to a sale at Robeson's.

The world of a small child is closely confined in church. I could barely see over the back of the pew without standing on a kneeler. There was nothing for me to do. My mother and aunt were standing and kneeling and sitting down according to no rhythm I could comprehend. I owned a ball point pen that had three points you could slide down--red, green, and blue--and sitting down backwards on the kneeler I used our pew as a desk and began to color the cross on the cover of the church bulletin.

After Mass was over and we were in the car and my mother and Mary lit up their cigarettes, I asked, "Why doesn't God want to look at you?"

"Because he wants to keep an eye on you," my mother said. I hated answers like that. My Uncle Bob had an infuriating response for every question: "It's to make little boys like you ask questions."

One might gather God has never wanted to look at women. They are an offense to his eyes. He doesn't want to see them on the altars of his churches. He doesn't want them fooling with his sacraments. His son never married one. For the mother of his son, he provided a virgin who had never employed her womanly organs for the purpose of procreation. We know Mary grew large with child and presumably gave birth in the usual way, although whether giving birth to the son of God was easy or difficult for her is not recorded by the Evangelists, who were all men, as were all twelve of the Apostles. 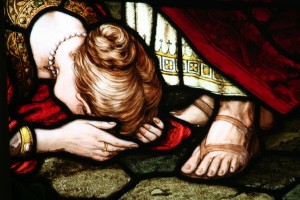 One woman Jesus seems to have been close to, apart from his mother, was Mary Magdalene. As we all know, she was a prostitute, and Jesus cleansed her of her sin. She washed and dried his feet with her hair before or after the cleansing. She accompanied Jesus on his travels, and was accorded the honor of being the first to see him after his Resurrection. As a follower she was therefore a disciple, but not one of the Twelve Apostles.

The fact is, there's not one word in Scripture to support the notion that Mary Magdalene was a prostitute. We are told that Jesus cleansed her of seven demons. One of the demons was possibly assumed to be prostitution by men who later interpreted the gospels, because her sexuality itself stirred unease in them. Patriarchal logic at work: If Magdalene was possessed by demons, one of them must have been sexual, and since she was not married she must have been a prostitute. 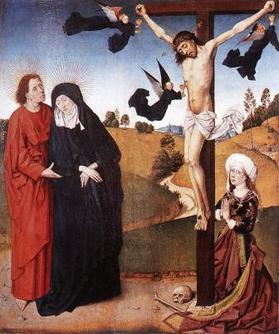 Yet after the other Disciples fled in fear from the foot of the cross, only Magdalene, Mary and John the Beloved loyally remained. In a disputed translation of the apocryphal Gospel of Philip, found on a Nag Hammadi scroll in 1945, we may read: And the companion of the Saviour was Mary Magdalene. Christ loved Mary more than all the disciples, and used to kiss her often on her mouth. The rest of the disciples were offended by it and expressed disapproval. They said to him, "Why do you love her more than all of us?" The Saviour answered and said to them, "Why do I not love you like her?"

The Catholic Church expresses grave reservations about the Dead Sea Scrolls and other early manuscripts, perhaps because they may not entirely corresponded to the patriarchal party line. Some tweaking of the Gospels has been going on since the beginning. For example, most of us know that John was "the most beloved disciple," but a great many modern Biblical scholars believe that his name was substituted somewhere along the line for Magdalene's.

I am not concerned so much with Church teachings, but with the way men's minds work. To put it bluntly, I believe the world is patriarchal because men are bigger and stronger than women, and can beat them up. The earliest archeological evidence we have for human family development indicates patriarchies preceded written language. Indeed, if we study other primates we see that their cultures are also male-dominant, and presumably they've not arrived at this state after careful discussion.

Once primates got started on this track, it seems to have been fixed in our nature. I know evolutionary and biological theories have been advanced to explain it. I can think of a theological reason: Eve was required to tempt Adam so that Man would be stained with Original Sin, and then Jesus could die to redeem us. Two sexes were required. Parthenogenesis provided few opportunities for sin.

Today such reasons are less compelling. A lot of it comes down to: Men like it this way, it suits their nature, and they have the power to enforce it. There must be something abhorrent to some men in the ideas of female rights and equality. Does it threaten them? Does it diminish them? 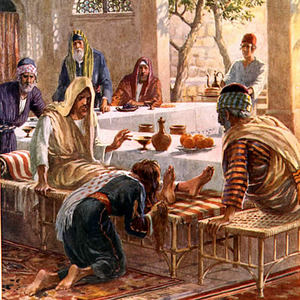 In doing some research for my review of "Made in Deganham," the movie about the women strikers against Ford UK, I wanted to find out when equal pay for equal work first became the law in the United States. I didn't discover what I expected. Only two weeks ago, a Republican filibuster in the U. S. Senate prevented passage of the Paycheck Fairness Act, which would have added teeth to measures for equal pay. The Republicans presumably feel they have some support from women on this subject, especially those following religions which preach that a woman must submit to the will of her husband: Either her actual husband, or her legislatorial surrogate.

Some religions are more outspoken about female subservience than others, some less, and a few preach against it. The Catholic Church, in the midst of trying to clarify its teachings on women, dropped a spanner into the works last summer by describing the ordination of women as a "grave crime" like pedophilia. The Vatican had also described pedophilia as a "grave crime," and many news reports quickly made an equation.The Pope might have been prudent to give as an example a grave crime like genocide that didn't make you think of priests.

There was a moment in the 2008 Presidential debates when candidates were asked if they agreed with Creationism. Many did. Catholics are encouraged to accept the Theory of Evolution. What if you asked Catholic candidates if they agreed that ordaining women and pedophilia are comparable crimes? 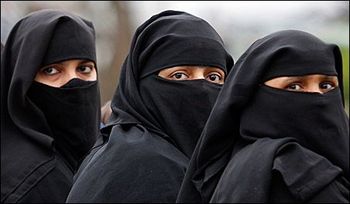 You could ask questions along parallel lines of Muslims and Orthodox Jews. Their women in some branches are not even allowed to attend worship services in the same spaces as men. Members of some kinds of Islam require women to shield themselves from everybody's eyes. To be an uncovered woman is to be an affront to a man--a possible temptation. (That reminds me of grade school, when we were warned that entertaining thoughts about a woman's body was a possible Occasion of Sin.) One of a husband's duties is to breed with his wife to produce sons who will follow this tradition, and daughters who will submit to it. Another duty is to prevent any other men from getting ideas into their heads.

I watched the debate last week between Christopher Hitchens and Tony Blair. Their subject was: "Be it resolved, that religion is a force for good in the world." The most stimulating thing about the debate was that it was held at all. How often do we ever hear fundamental questions debated in a civil manner between intelligent speakers? Would there be an audience on cable for weekly debates between college teams? In America, debating was the leading intercollegiate sport before the introduction of football.

Blair and Hitchens made points one might agree with, and points one might not. At one point, Hitchens asked Blair a question that hung in the air for a second and went unanswered, because Blair must have had no answer. This was the question:

"Is it good for the world to consider women as an inferior form, as all religions do?"