All by ourselves alone 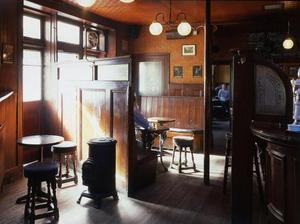 In Venice there is a small bridge leading over a side canal. Halfway up the steps is a landing, and a little cafe has found its perch there. In front of this cafe is a table with two chairs. If you chose the chair with its back to the cafe, you can overlook the steps leading from the canal path, or rivetta, ahead of you. This is a quiet neighborhood crossroads, a good place to sit with a cup of cappuccino and the Herald-Trib you got from the newsstand behind Piazza San Marco.

Above: The Holly Bush, Holly Mount, Hampstead. Choose the corner next to the fire.

I walked out of the Martinez and was made uneasy again by the wind. So I turned inland, away from the Croisette and the beach, and walked up into one of the ordinary commercial streets of Cannes. I cut behind the Carlton, walked past the Hotel Savoy, and before long was at the little fruit and vegetable marketplace, at the other end of town from the big market. I took a table at a cafe, ordered an espresso and a Perrier, and began to sketch.

Suddenly I was filled with an enormous happiness, such a feeling as comes only once or twice a year, and focused all my attention inward on the most momentous feeling of joy, on the sense that in this moment everything is in harmony. I sat very still. I was alone at a table in a square where no one I knew was likely to come, in a land where I did not speak the language, in a place where, for the moment, I could not be found. I was like a spirit returned from another world. All the people around me carried on their lives, sold their strawberries and called for their children, and my presence there made not the slightest difference to them. I was invisible. I would leave no track in this square, except for the few francs I would give to the cafe owner, who would throw them in a dish with hundreds of other coins.

After a time, the intensity of my feelings passed, and I sat absolutely still at the table, a blank, taking in the movements before me. There are times when I think it would be possible to lead my whole life like this, a stranger in a foreign land, sitting in a cafe, drinking espresso, sketching on a pad, sometimes buying a newspaper which would tell me in my own language what was happening in other places to other people. I would see myself in the third person--that anonymous figure in the distance, crossing under the trees. Most of the time I am too busy to entertain such reflections. Indeed, I have filled my life so completely with commitments and deadlines that many days there is no time to think at all about the fact that I am living it. But these still moments, usually in foreign country or a strange city, give me the illusion that all of my life is as distant from me as the lives of the people in the marketplace, and that in some sense the person that is really me sits somewhere quietly at a table, watching it all go by.

Stands the Church clock at ten to three? And is there honey still for tea?