A seance with Errol Morris 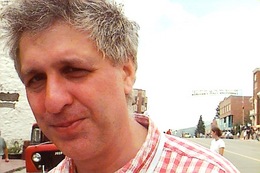 It's little wonder Errol Morris and Werner Herzog are good friends. They have this in common: They make strange, brilliant films, and they have strange, brilliant minds. I've never had the pleasure of observing either one at those "round tables" they convene at film festivals to give a dozen critics the experience of sitting for a dozen minutes at the same table with a great person, and the opportunity to judge the great person's ability to generate sound bites. I don't even know if Errol does round tables to promote his films. But if he does, I'm pretty sure he would take the entire twelve minutes to answer the first question.

That's not to say he's a bore. Anything but. He enthralls. He answers a question with the precision and care of a philosophy master conducting a tutorial of his best students on a balmy afternoon in Cambridge, the breeze playing with vines at the window while all human knowledge seems just barely out of reach.

Errol and Michael Barker at Ebertfest 2004 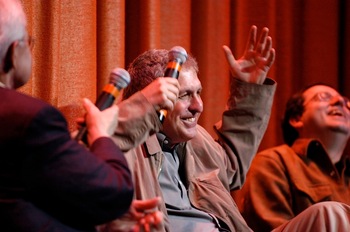 I find Morris's new film "Tabloid" to be one of his best and most intriguing. It is impossible to be sure how to read it. That is the plan. "The Thin Blue Line" (1988) may be the only documentary he has made where the viewer can be reasonably sure of what Morris intended to convey. That film freed a man from Death Row in Texas. It is perfectly consistent with the oddness that stalks Morris that as soon as the man was set free, he sued Morris for cashing in on his life.

Faithful readers will know I consider "Gates of Heaven" (1978) to be one of the greatest films. Gene Siskel shared my love for it, and we sometimes would show it to a group -- a weekend seminar of Chicago bankers at Lake Geneva, Wis., for example. "Whatever you do, don't announce the name of the film," Gene instructed the event chairman. "Nobody will think they want to see a film about a pet cemetery."

The bankers, in the event, allowed the discussion session to run overtime for an hour, and voted ours the most valuable presentation of their expensive weekend: Dead pets, not investment gurus or government spokesmen. Yet the bankers had one problem with the film, and people have this problem with most Errol Morris films: They couldn't agree on whether he loved the people in "Gates of Heaven" from the boundless depths of his heart, or was mercilessly satirizing them.

Errol and Werner Herzog at Ebertfest 2004 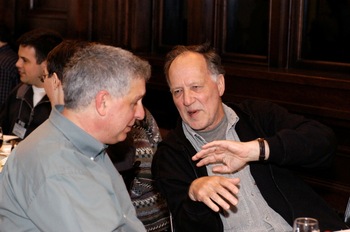 Having seen all of Morris's films, I think the answer is complicated. He loves the subjects of his films. He finds their peculiarities and obsessions to be fascinating. He is not a critic of them. He makes no judgments. He doesn't know the right answers. He has no agenda. He simply wants to know: What will they say next?

In "Tabloid," for example, is his heroine Joyce McKinney speaking the truth when she gives her version of a story that riveted the UK tabloid-reading public for a long and steamy season? Or are other versions of the facts more accurate? I honestly believe Morris doesn't think it matters. It is Joyce McKinney he cares about. How she presents herself, how she copes, who she is to herself, what she does to explain a bizarre and contradictory story.

The wraithlike Morris unveils the Interrotron at Sundance 2001 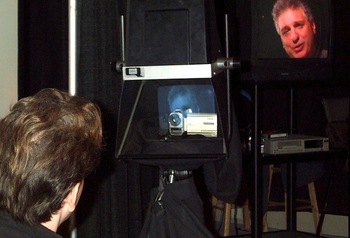 Watching the film, which I have done twice, is a tantalizing experience. Everything seems right here in our grasp, like Truth on the spring afternoon in the philosophy seminar room. Yet there are questions that cast Truth into doubt, so that when you leave at the end you may feel you have the necessary materials, but aren't sure how to assemble them.

I spoke with Errol when he visited Chicago between the Telluride and Toronto festivals. Luckily, I made a video record of our conversation, because how in the world would you reduce it to 1,200 words of quotations separated by "he said" and "he added" and "he explained?"

I can't say he answered my questions, not precisely. He took each one as the starting point for a conversational train of thought. For your amusement, I will reprint my actual questions, and then you can see where he takes them. If the questions and answers don't precisely fit, well, there you have it.

Background: It was alleged by Kirk Anderson that in 1977 Joyce McKinney followed the missionary to England, kidnapped him, shackled him to a bed, and had sex with him. All lies, she says, and describes her actions as an intervention to rescue him from a cult. British police said she fled the country with an accomplice after she donned a red wig and they flew into Canada posing as a mute mime troupe.Years after she became known for her involvement in "The Case of the Manacled Mormon," Joyce McKinney found herself in the news again after a Korean scientist allegedly cloned her beloved dog, producing five puppies.

I wonder if you could describe the process by which a story like this appears as a blip on the horizon and gradually grows larger until you discover it has become your next film.

You have extraordinary access to Joyce McKinney. How did you find her? Why did she decide to discuss her life with you? How did you make the leap between the scandal and her cloned puppies?

Why do you think she spoke with you?

The role of the British tabloids plays a major role in this film. Joyce seems at times almost to be living as a character created for their front pages.

You called this only the second love story you have ever filmed. Not everyone will see it as a love story.

Do you know where Kirk, her alleged victim is today? What contacts have you had with him?

You have been putting incredible attention and energy into your blogs for The New York Times. This has become like a second career for you. How did that grow to such a large portion of your work?

Sequel: In 2008, McKinney faced burglary charges in Tennessee while trying to find funds to purchase a false leg for her three-legged horse..