Bad Times at the El Royale

Drew Goddard, who wrote the screenplays for “Cloverfield” and “The Martian” and wrote and directed “The Cabin in the Woods,” is a very clever filmmaker. His new picture, the second feature he’s both written and directed, is called “Bad Times at the El Royale,” and it’s an unfortunately apt demonstration of what can befall a clever filmmaker who gets too clever.

The movie opens with a teasing set piece that’s well executed and promising. A shot of a room in a relatively upscale motor hotel. A man in a trenchcoat with a bloodied arm enters, carrying duffel bags. In a series of jump-cut shots all from the same camera position we see the man move all the furniture to one end of the room, roll up the carpet, pull up the floorboards, leave the duffel bag under the floor, put the room back together again, and wait. Another man arrive and kills the poor fellow who buried the bag. Apparently this fellow is unaware of what the now dead guy has been up to. A title card says “Ten Years Later” and it’s a sunny day and we know that whatever’s in that duffel bag is still under the floor at what we now know to be the El Royale.

A novel feature of the place is discussed by the first two characters we meet, Jeff Bridges’ Father Daniel Flynn and Cynthia Erivo’s Darlene Sweet. The lodging is built on top of the border between Nevada and California, and the hotel rooms are especially styled for each side. The Nevada side is the one with a casino, although the license for this one has expired. The place has seen better days. As borne out by the fact that once Darlene and Daniel go inside to check in, they’re met by an obnoxiously garrulous appliance salesman named Laramie who’s been cooling his heels in the lobby while no staff members manifest themselves.

Played by an enjoyably unctuous Jon Hamm, Laramie gives a spiel—drenched in a very inauthentic Biloxi accent—until Darlene’s sharp knock on an employees-only door rouses the somnolent bellboy Miles (Lewis Pullman) who flies into an odd panic when he sees a priest trying to check in. The question of why, and other questions, go by the wayside, drowned out by a loud automobile pulling into the lodge’s lot, motored by a very surly Dakota Johnson, who signs the log book with a two-word epithet.

A television clip of Richard Nixon explaining the nature of guerilla warfare and why a conventional “ceasefire” might not do the trick in Vietnam fixes the movie’s time period in 1970 or so. But that’s the only thing we can be sure of once the clients have checked in and entered their rooms. Hamm’s character makes a phone call, during which he drops the accent—and starts plucking out various listening devices from the phone he’s speaking on. Darlene hangs blankets on her walls, puts a metronome on a mantlepiece, and begins singing. Johnson’s character takes an unconscious and bound-up woman out of her trunk and sits her in a chair in her room. And Father Daniel moves the furniture to one side of his room, rolls up the carpet, and starts pulling up the floorboards.

“Bad Times at the El Royale” has a lot of plot. Almost enough to support its 140-minute running time. But once the threads are more or less pulled together, the movie devolves into a bloody, drawn-out standoff plot in which a preening villain struts around being appalling while the camera eats up his every move. This elicits the disapprobation of Darlene, who takes a look at what’s going on and pronounces to said villain, who’s trying to get her to bet her life on a spin of a roulette wheel: “I’m just tired. I’m just bored of men like you.” At this point I wrote in my notes: “Yeah me too.”

Goddard seems under the impression that this form of auto-critique gives the film’s sadism some kind of pass. But he’s wrong. And that is what’s called being too clever for your own good. That and naming your character “Darlene Sweet” and including a flashback that puts her at the mercy of a faux-Phil Spector character. 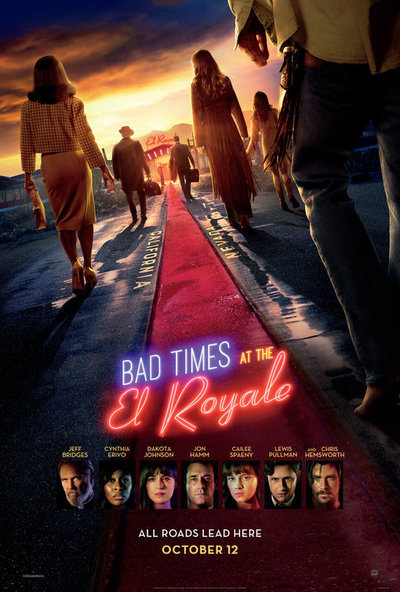