James Franco’s “Zeroville” has been in distribution limbo after its 2014 production and 2017 allegations levied against its creator. Although pinning down the exact reason that the people involved in this adaptation of Steve Erickson's hit novel wouldn’t want the movie released could be a little difficult. Franco has long fascinated me as a filmmaker both in his output (he already has over 30 directorial credits) and the source material with which he chooses to play (he’s adapted Faulkner, Steinbeck, and Cormac McCarthy, among many others). A film about the changing face of Hollywood in the ‘70s with a protagonist who is heavily influenced by the artists around him feels like a perfect fit for a creative voice who has had a career that sometimes felt like that of an outsider who had been mistakenly allowed in. That promise in a union between creator and material quickly dissipates as Franco embraces the zero in his title, producing a film that starts to feel like a middle finger to both Hollywood and anyone who searches for meaning in it.

Early in “Zeroville,” before the movie really loses its way around the half-hour mark, an editor played by Jacki Weaver shows our hero Vikar (Franco) how a crucial scene from “A Place in the Sun” is more interested in intimacy than continuity. She goes as far as to encourage Vikar, who’s going to become an editor himself, to say, “Fuck continuity.” It’s right there that I knew we were in trouble. Continuity has never been Franco’s strong suit as a filmmaker, and he’s clearly including this scene as a warm-up for what’s to come, as a film that’s already kind of loose and shapeless becomes an incoherent blob.

It starts promisingly enough. Vikar arrives in Hollywood in 1969, on the cusp of a revolution in the industry. He has an image of Montgomery Clift and Elizabeth Taylor tattooed on the back of his bald head, and he’s sort of like a Zelig in these early scenes, as Franco turns “Zeroville” into something not unlike “Once Upon a Time … in Hollywood” in the way it blends tinseltown history with its fiction (in fact, the first scene features Vikar being accused of the Sharon Tate murders). There’s Ali McGraw flubbing a line on the set of “Love Story!” There’s Steven Spielberg talking about a shark movie he wants to make! There’s George Lucas talking about robots! As Vikar stares blankly at all of it, Seth Rogen and Weaver make engaging co-stars, but they then disappear as “Zeroville” becomes a story of Vikar’s relationship with a beautiful actress named Soledad Paladin (Megan Fox) and an angry producer named Rondell (Will Ferrell).

Set over many years, “Zeroville” charts the tumultuous relationship between Vikar and the film industry. I think. Maybe. Who knows, really? It’s a film that is constantly pushing back against any interpretation or even traditional narrative thrust thinking that we will be way more invested in Vikar's story than we ever remotely are. When Rondell laughs at the thought that Vikar could land a star as beautiful as Soledad, he then challenges the young man to come outside where he shows off his excess at a party ... by singing “Mickey’s Monkey” by The Miracles. As Franco and Fox share serious looks, Will Ferrell sings “Lum de lum de lai-ai” and I swear you’ve never seen anything like it. Is Franco satirizing excess? Maybe? But it’s so wooden and poorly shot that it doesn’t matter because it just reads as ridiculous. Franco doesn’t understand the difference between satirizing excess and just being excessive. He never has.

To be honest, I longed for a Ferrell sing-a-long during the final act, in which “Zeroville” naturally has to get more serious about Vikar’s relationship with Soledad and her daughter Zazi (Joey King). This is where you start to question what it all means, and I just kept coming up with, sorry, zero. Is Vikar’s obsession with Soledad a symbol for a lost era of Hollywood? Probably. But that’s likely something way more deeply explored in the novel but purely superficial here. By the time Joey King is singing Iggy Pop in a moment that I think is supposed to be emotional based on the on-screen tears, it’s impossible to care.

James’ brother Dave shows up as the ghost of Montgomery Clift late in the movie, and I wondered what an entire film in which the other Franco played the doomed actor would be like. When a movie is nearing its end and you’re writing better ones in your head, something has gone very wrong. 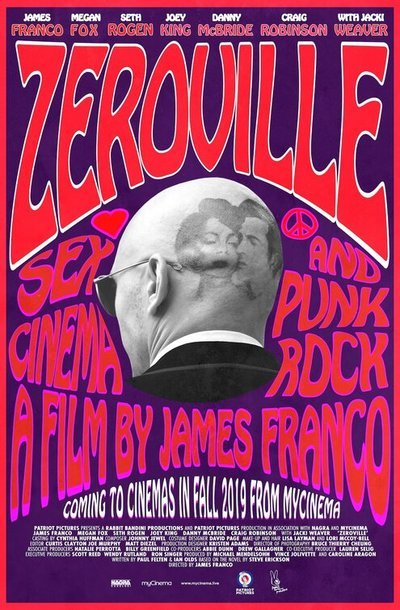 Rated R for language throughout, some sexual content/nudity and brief drug use.

Will Ferrell as Rondell