Has "The Sopranos" whacked the mob comedy? It sure feels that way -- at least for now. Just about anything is going to feel slight next to David Chase's 86-episode magnum opus, the rare genre piece that matches or exceeds its influences, from "The Godfather" movies to "GoodFellas". But "You Kill Me" is as flimsy and uninspired as the double entendre of its title. It looks lightweight next to "Analyze This." Maybe even "Analyze That."

This time, the mobster doesn't go to a shrink, he goes to AA meetings. Drinking, you see, interferes with his work -- as a hit man. You can't kill people effectively if you're drunk and pass out before your mark arrives.

Although it is ostensibly set in present-day Buffalo and San Francisco, the comic sensibility of "You Kill Me" is curiously retrograde. The movie begins with a couple of Polish jokes under the opening credits. The first one is pretty good: Alcoholic contract killer Frank Falenczyk (Ben Kingsley) shovels his front sidewalk, repeatedly tossing his fifth of vodka into the snow as an incentive to keep forging ahead. The second one is just a setup/punchline gag overheard on a radio talk show: "How do you get a one-armed Polack out of a tree? You wave to him." From there, the movie switches targets and degenerates into a stream of gay jokes so witless they don't even qualify as jokes.

"You Kill Me" features extremely talented people doing everything they can to improve a thin and puerile script. Director John Dahl is a master of modern absurdist noir ("Red Rock West," "The Last Seduction," "Rounders"). Cinematographer Jeffrey Jur splashes the screen with intense blue and yellow gels and creates angular, shadow-streaked widescreen compositions that translate a noirish sensibility into vivid color. And the cast is a dream: Kingsley, Tea Leoni, Bill Pullman, Luke Wilson, and as rival mob bosses, Dennis Farina and Philip Baker Hall.

What do they have to work with? A tepid, dated screenplay by Christopher Markus and Stephen McFeely ("The Life and Death of Peter Sellers") that feels like a first draft by a film-school sophomore. Maybe a second draft.

And then there's the scene where Kingsley, in his underwear, pulls a gun on a San Francisco city supervisor in his office. Why? Mayor George Moscone and Supervisor Harvey Milk were gunned down in San Francisco City Hall in 1978. What is the point? Is this supposed to be another unfunny homophobic gag in a movie strewn with them?

No offense to Sir Ben, who does a mean deadpan, but his performance here is frequently more dead than pan -- which, given the material, was probably the wisest acting choice. The accent is a bit wobbly, too. And the central love story... well, it's established that Leoni's character may be looking for a father figure, but the 23-year age difference between her and Kingsley is a bit tough to swallow. And it's not just any old 23-year age difference -- like, say, the one between 22 and 45 -- but, specifically, it's the one between Tia Leoni at 39 and Ben Kingsley at 62. That can make your stomach hurt just a little bit.

Now, if you want to see some really dark, funny, twisted hit man comedies, how about Wallace Wolodarsky's "Coldblooded" (Jason Priestley, Peter Riegert, Robert Loggia) or Saul Rubinek's "Jerry and Tom" (Joe Mantegna, Sam Rockwell, Peter Riegert, with a script by Chicago theater vet Rick Cleveland) -- both underappreciated, but much more potent and original than "You Kill Me." Or you could always rent "Grosse Pointe Blank" again. 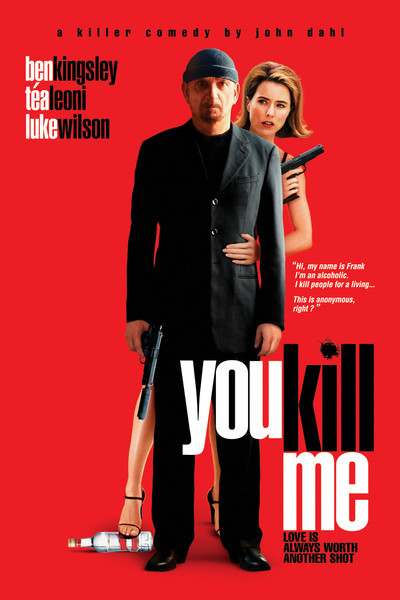