The critical rehabilitation of Paul Verhoeven’s 1995 “Showgirls” continues apace with “You Don’t Nomi,” a documentary that wants to appear inventive but too often comes off as affected, directed by Jeffrey McHale.

Some of you may be saying, right about now, “Hold up there. The ‘critical rehabilitation of WHAT???’” Yes, “Showgirls.” That very over-the-top depiction of cutthroat career moves, sexual exploitation and harassment, assault, and general all-American excess, which bombed in too many ways to count, and torpedoed the not-even-started film career of its leading lady, Elizabeth Berkley, once of squeaky-clean (if you don’t count the show’s smarmy subtext) “Saved by the Bell” fame. And yes. There has been not just a critical rehabilitation of it, but an elevation to cult status (although that latter can be considered more predictable than the former).

The critical reassessment, for some, started with the French director Jacques Rivette, who praised the movie in a 1998 interview. His thoughts are worth reproducing at length: “It’s Verhoeven’s best American film and his most personal. In ‘Starship Troopers,’ he uses various effects to help everything go down smoothly, but he’s totally exposed in ‘Showgirls.’ It’s the American film that’s closest to his Dutch work. It has great sincerity, and the script is very honest, guileless. It’s so obvious that it was written by Verhoeven himself rather than Mr. Eszterhas, who is nothing. And that actress is amazing! Like every Verhoeven film, it’s very unpleasant: it’s about surviving in a world populated by assholes, and that’s his philosophy. Of all the recent American films that were set in Las Vegas, ‘Showgirls’ was the only one that was real—take my word for it. I who have never set foot in the place!”

But Rivette doesn’t even merit a single mention in McHale’s movie, which is telling. The first voice you hear, instead, is that of writer Haley Mlotek, who pronounces “I don’t think we’re done with it because we don’t know what it is as a film.” This implies something in the realm of a surrealist reading in the offing, but eventually Mlotek delivers much more banal stuff, mostly laying bare a confounded irritation with the entirety of Verhoeven’s filmography. Next is David Schmader, an Oregon-based writer who began hosting “annotated” screenings of the movie some years after its release and eventually contributed a commentary to a Blu-ray anniversary edition of the movie. HIs condescension toward the movie is practically suffocating.

You don’t see any of these commentators. McHale lifts a couple of cues from the oddball doc about “The Shining” obsessives, 2012’s “Room 237.” He doesn’t put any of his own interviewees on camera (archival interviews with Verhoeven and company are plentiful), and he alters footage from other Verhoeven pictures to illustrate his points. In a clip from “The Fourth Man,” for instance, Jeroen Crabbé projects some 8mm reels that are marked “Showgirls.” Ar ar ar.

His withholding of the actual faces of his commentators doesn’t quite work either, because the male voices, especially, sound sufficiently alike that it becomes hard to keep track. Schmader’s patronizing affect, and his seemingly constitutional compulsion to use the word “f**king” as a modifier in every other sentence, make his thread the easiest to follow. Critic Adam Nayman, who wrote a fine book on “Showgirls” called It Doesn’t Suck, makes the most sense most of the time, with detailed analyses of the movie’s visual dynamic that demonstrate that Verhoeven was acutely aware of what he was doing at every step.

McHale tries to undercut Nayman by introducing the critic Barbara Shulgasser-Parker, who steps on one of Nayman’s observations (which the director had to have fed her) in a dismissive and aggressive way. The juxtaposition seems a deliberate attempt to belittle him. (I’m friendly with Nayman, so maybe I’m taking it too hard.)

Eventually, the movie chronicles drag shows based on the movie, and “Showgirls! The Musical.” It delves into the way the movie mirrored, for a lead actor in that show, some of the horrific events in her own life. Reliving and somehow lampooning them via the stage production proved cathartic for her. This recounting starts off feeling like a weird digression, but winds up being one of the most simply effective sections of this generally confused movie. 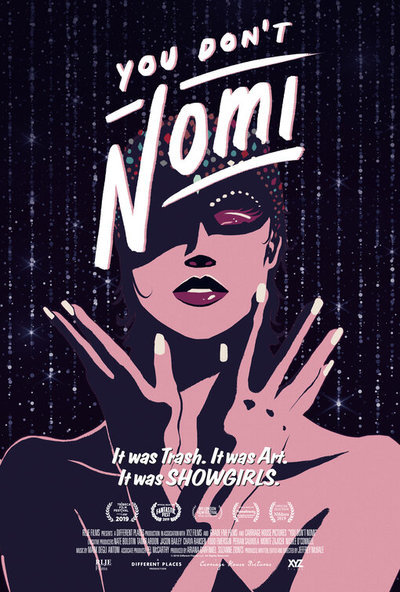 Jeffrey Conway as Himself

April Kidwell as Herself

Adam Nayman as Himself

Haley Mlotek as Herself

David Schmader as Himself

Elizabeth Berkley as Herself (archive footage)

Gina Gershon as Herself (archive footage)

Kyle MacLachlan as Himself (archive footage)

Paul Verhoeven as Himself (archive footage)

Joe Eszterhas as Himself (archive footage)

Jeffrey Sconce as Himself