Year of the Horse

The film, directed by Jim Jarmusch, follows a 1996 concert tour and intercuts footage from 1986 and 1976 tours. It's all shot in muddy earth tones, on grainy Super 8 film, Hi Fi 8 video and 16-mm. If you seek the origin of the grunge look, seek no further: Young, in his floppy plaid shirts and baggy shorts, looks like a shipwrecked lumberjack. His fellow band members, Billy Talbot, Poncho Sampedro and Ralph Molina, exude vibes that would strike terror into the heart of an unarmed convenience store clerk.

This is not a fly-on-the-wall documentary. Jarmusch's interviews take place in a laundry room, where the band members and Young's father sit on a straight chair and meditate on the band's long and lonely road. Young muses on “the trail of destruction I've left behind me,” and there is solemn mention of departed band members (“Neil once said they were dropping like flies”).

These seances are intercut with concert footage, during which the band typically sings the lyrics through once and then gets mired in endless loops of instrumental repetition that seem positioned somewhere between mantras and autism. The music is shapeless, graceless and built from rhythm, not melody; it is amusing, given the undisciplined sound, to eavesdrop later as they argue in a van about whether they all were following the same arrangement.

The older footage is not illuminating. One high point, from a visit to Glasgow in 1976, is a meal in a restaurant that is interrupted when the fabric flowers in the centerpiece catch fire. The band members try smothering the flames with napkins and extinguishing them with orange juice, and eventually they join the woman who owns the place in sadly eyeing the ashes.

Later in the film, Jarmusch himself appears on camera, reading to Young from the Old Testament, a book the musician seems unfamiliar with. Jarmusch reads the parts where an angry God tells his people how he will punish them, and Young looks as if God's tribulations are nothing he hasn't been through more than once. 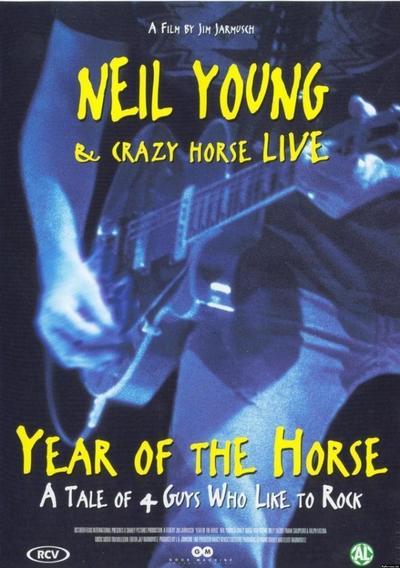