Every now and then there’s a horror movie that proves reboots aren’t an inherently craven concept. (I happen to think that the recent “Child’s Play” and “The Grudge” movies fit that description.) “Wrong Turn,” directed by Mike P. Nelson and written by Alan McElroy (of 2003’s “Wrong Turn”) is such a gem. And it’s not just worthwhile in comparison to that Eliza Dushku-starring hicksploitation film, which equaled the artistry of a pancake. For my fellow skeptics, let me make it clear: gone are the West Virginian inbred cannibals and their hoard of corpse meat and car keys; the same goes for the dull predator vs. prey dynamic that dominated the first “Wrong Turn” (and inspired five sequels). The culture clash here between "goddamn hipster freaks" and people of the woods is more complicated here, and the way it unfolds is brutal and shocking without being depraved itself.

This is a remake that has clearly moved on from the original, and now wants to be graded on its brains instead of its brawn—for the dialogue it adds to the tension between two civilizations, especially as McElroy evolves the slasher story to cult horror, like an Appalachian "Midsommar." That last part is where it gets a little less sturdy, but director Mike P. Nelson has a confidence that keeps this movie bolder than you expect. And considering its fitfully nasty traps, it can be mighty thrilling when you don’t really know where a reboot like this is going.

This “Wrong Turn” shares the title mostly by branding—a group of hip, diverse young hikers also make a bad decision here, this time in search of a rare Civil War fort off an Appalachian trail. The batch includes Jen (an incredibly game Charlotte Vega) and her boyfriend Darius (Adain Bradley), an out-and-out socialist who works for a non-profit and openly dreams about an equal society. In general these hikers, who include a gay couple and also an interracial couple, are a liberal beacon for what they think the future of America should be. They're also dead meat, starting with the rogue tree trunk that suddenly barrels down the hill in an excellent, frantic sequence, killing one of them.

Not that these outsiders weren’t warned by the locals of the nearby small Virginia town to stay away, after then accusing the hikers of never working "real jobs" (to which the young folks then reply with their different careers, albeit none of them blue-collar positions). The initial tension in the movie is between that of curdled Confederate dreams and Bernie Sanders-grade socialism, and while it can be a little on-the-nose, it does make for a strong foundation related to fear of the other. Which so happens to later manifest itself in the woods with a creepy cult known as The Foundation, who wear animal skulls as masks and moss as camouflage, and have created a secluded civilization the Appalachian mountains since 1859. Adam (Dylan McTee), the hiking group's hothead, is dragged into one of the traps set by members of The Foundation, sending the hikers into panic mode. Along with the figures Jen sees in the woods, and the traps that injure them around the mountain (Darius takes a spiked ball to the chest, but recovers with help of med student Milla [Emma Dumont]), they're convinced it is they who are being hunted.

What’s striking, and a bit sloppy about this movie, is that it still humanizes everyone, albeit while honoring two different understandings of what is considered barbaric. When the hiking hipsters attack one of the Foundation members—without any outright violence committed beforehand—the act of killing becomes a divisive choice between the group. Adam, the guy who does the skull-smashing deed with a tree branch, screams out in self-defense, “These are clearly not good people!” The hikers face judgment when they are captured by other members of The Foundation. "Wrong Turn" then invests a chunk of its running time in a creepy court scene, inside the torch-lit caves of the cult, overseen by its stern ruler John (Bill Sage), whose rulings involve either darkness or death. He is deeply insulted when Jen, pleading for her life, accuses The Foundation of being barbaric.

The Foundation is what particularly moves this film away from its original, instead bringing up memories of Ari Aster’s cult horror movie “Midsommar.” "Wrong Turn" is practically emboldened by the horror that Aster has popularized, of being doomed by a terror that’s just out of your eyesight. And it’s certainly Aster-like with the amount of head trauma here, as Nelson’s often jolting moments of skulls getting crushed, shot, stabbed etc., prove to be just the type of cold-blooded beats you’d want from a movie filled with visceral emotional and physical pain. Nelson certainly has a more down-and-dirty approach than Aster, using desaturated colors with his copious daylight (like Fede Álvarez's "Evil Dead" remake), making the surrounding woods all the more claustrophobic, especially when it appears that the trees have eyeballs.

But the intellectual ambitions of this "Wrong Turn" sometimes overwhelm it, and the ultimate meaning behind The Foundation comes apart when you think about it. As a snarky Frankenstein of Darius' socialist dreams and the locals' conservative ideology, the cult doesn't make too much sense as the statement it clearly wants to be. It does, however, lead to some great thrills, as the traps set by The Foundation (for animals? for people?) on the mountains are horrific and surprising in their own right.

There’s a lifeline during this horror in the form of Matthew Modine as Scott, Jen’s father. The movie even begins with his search for her, and it gives the story a depth that makes it especially painful and nasty—everyone here is a family member, someone's loved one. And as the story goes on, McElroy scripts an often tight but long game with select pieces like Scott, and the locals back in town who beat him up when he asks too many questions. At the same time, "Wrong Turn" proves sharp at creating a strong sense of characters being doomed, but giving them a glimmer of hope if they can beat the next nasty threat in front of them. Meeting the mountain's locals is only just the beginning, and it becomes exciting to see McElroy and Nelson evolve "Wrong Turn" into a bizarre, winding odyssey, albeit with a lot more on its mind than just a cool kill.

In theaters only on January 26th and January 30th via Fathom Events. 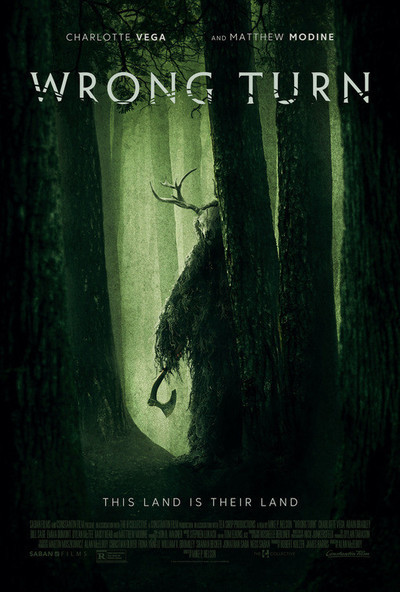