While the film that follows owes more of a debt to H.P. Lovecraft and William S. Burroughs, Babak Anvari opens his “Wounds” with a quote from Joseph Conrad’s Heart of Darkness that ends with “It echoed loudly within him because he was hollow at the core.” Armie Hammer’s Will is definitely hollow at the core. Like a lot of protagonists of horror films, it is his overall weakness as a human being that makes him so vulnerable to the nightmare that unfolds in his life.

Anvari pulls from easily recognizable literary and cinematic references but never quite finds the right tone for “Wounds,” a film with two halves that often seem at odds with each other. On the one hand, it’s a relationship drama about the kind of vacuous man who mistakes cynicism for character, but it’s also a grisly story of the same man stumbling headfirst into a Cronenbergian nightmare. Of course, creators like Cronenberg and Lovecraft succeeded because they merged the two—the humane and the insane—but Anvari can’t quite pull off the hybrid, even if I admire the attempt more than most of my colleagues.

Will (Hammer) works at a New Orleans bar called Rosie’s, where he seems to find the most control in his life. It’s kind of a rundown townie bar (although Anvari doesn’t do enough to make it feel as dirty and grimy as it should have to be an effective setting) with enough regulars to scare away most of the Tulane kids who try to drink there even when they’re still under age. There’s a quartet of such kids at Rosie’s on the night the film opens, and one of them leaves their phone there after a fight. Will nonchalantly takes it home, presuming its owner will return for it the next day. And then things get weird.

Will figures out how to unlock the phone and starts getting disturbing text messages and eventually photos and calls. He discovers that the dumb kids basically did their own “Evil Dead” thing and messed around with an ancient book about using wounds as portals to other dimensions. Yes, you read that right. You know how grisly and gross gaping flesh wounds can be? Imagine if they had supernatural powers too. “Wounds” is at its best when chronicling the sweaty unraveling of Will, a man whose world collapses around him to the point where he questions his own sanity.

While that narrative unfolds, Anvari also lets us in on Will’s failures as a friend and partner. He’s living with a girlfriend named Carrie (Dakota Johnson), but they’re clearly on their last legs before she gets sucked into the nightmarish visions unleashed by the missing phone. Part of the problem is that Will has eyes for his friend Alicia (Zazie Beetz), even though she’s dating someone else (Karl Glusman’s Jeffrey). As Will’s horrific visions and sense of impending doom heightens, he pushes Carrie away and attempts to cling to Alicia. An interesting, if undercooked, aspect of “Wounds” emerges from the overall weakness of Will’s character. He pushes himself on Alicia, ignores Carrie, and essentially enables the alcoholism of an alleged friend (played by an effective Brad William Henke).

Hammer deftly captures a man whose superiority complex is built on thin ice, the kind of jerk who mocks people who go to nearby Tulane without questioning the reasons he dropped out. He leans into his own good looks, although I wish Anvari was more willing to subvert that part of his persona. In one of the best scenes, Hammer reveals an armpit rash that’s likely a part of the recent supernatural happenings, but it doesn’t go much further than one great scene. I wanted Will to really descend into body horror madness. There’s a much stronger version of “Wounds” in which he’s practically Brundlefly by the end, falling apart as much physically as he is mentally.

As for his partner, Johnson doesn’t make much of an impact at all. She’s a non-character, existing almost entirely as a sounding board for Will, although she does have one of the film’s most interesting scenes visually involving a catatonic bath. More effective is Beetz, who proves again she can do a lot with very little.

“Wounds” ends in a way that will likely infuriate those who watch it this Halloween season on Hulu. It’s something of a non-ending, leaving just enough open for interpretation on the part of the viewer. Of course, that’s fine in supernatural cinema and literature, but the non-ending highlights the overall flaws of a film that feels like it’s often just shy of coming together. Anvari’s “Under the Shadow” was such a tight, sharp piece of genre cinema, that it's a bit disappointing to say that his follow-up often feels unfocused and shallow. Even if its literary influences are top notch. 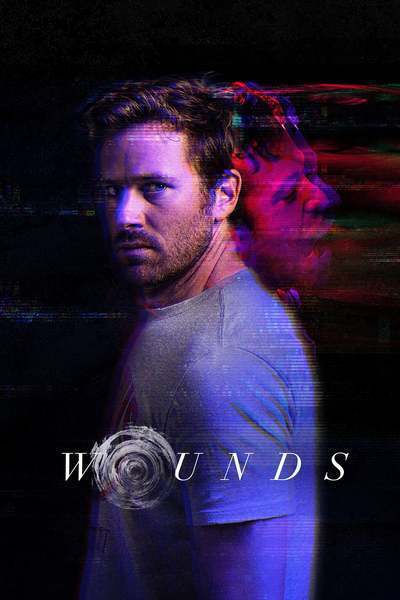 Rated R for disturbing violent content, language throughout, drug/alcohol use, and brief nudity.

Armie Hammer as Will

Writer (based on the novella 'The Visible Filth' by)