Can you put a price tag on a life?

"Worth" delves into that question by telling the story of the 9/11 Victims' Compensation Fund. The fund was created by an act of Congress to ease the suffering of families who lost loved ones in the attack and (perhaps more importantly, from the government's standpoint) keep them from suing the two airlines whose planes were hijacked.

Is a janitor's or schoolteacher's life worth less than a Fortune 500 CEO's because the CEO earns more money and owns multiple houses and cars and has stocks and so forth? That's the sort of question that the people in charge of the fund had to answer every day between the establishment of the fund and its two-year deadline for payout. Directed by Sara Colangelo ("Little Accidents") and written by Max Borenstein ("Godzilla"), "Worth" seems overwhelmed by the questions it poses, and in the end, for all its intelligence and noble intentions, it retreats from them.

A brisk opening section sets up the premise and major characters—notably Michael Keaton and Amy Ryan as Kenneth Feinberg and Camille Biros, the attorneys supervising the fund, and Stanley Tucci as Charles Wolf, a musician, pilot and businessman who lost his wife Katherine in the attacks, and started "FixtheFund.org" to address problems with the process. The midsection of the film is the strongest and most distinctive because it departs from the standard Hollywood formula of following the stars through a story, and instead gives the stage over to victims of the attacks. There are long sections of "Worth" where we're just watching and listening as people tell the stories of loved ones they lost. In these scenes we get a sense of the enormity of the tragedy as well as the impossibility of working out compensation in a way that will make everyone feel as if their needs were met and their feelings respected.

A pleasant yet unsentimental tone is struck early by Feinberg, who is a big advocate for "objectivity" and removing emotion from situations. Whether that's really possible is a question that the film doesn't have the running time (or inclination) to get into. And while it's initially intriguing that Feinberg says that in mediations and lawsuits, "there is no winning," and insists that in the end, "no one walks away too happy, only happy enough to walk away," it eventually becomes clear that "Worth" is setting up a story about a guy who needs to have his eyes opened by the warm and complicated human realities of those who are suffering, and realize that a "one size fits all" formula isn't going to work.

Ryan's Biros is treated as a counterweight to Feinberg; if anything, she seems to take all of the stories personally, absorbing the grief of survivors and crying it out cathartically. Meanwhile, Tucci's Wolf orbits the edges of the story, serving as sort of a guru and sounding board, pushing the commission along on the right path.

The big problem with the movie is that it doesn't really grapple with the questions it poses. The fact that the questions are unanswerable doesn't mean they shouldn't have been engaged with more fully, and in the mid-section of the movie, it does seem as if the film is going to try to do that and stick with it, even if it means that we get to the end of the story and feel frustrated that the film has thrown its hands up and said, "Sorry, folks, this is just too big—we're as overwhelmed as you are." As in real life, the fund initially seemed as if it was on the verge of failing to meet its mandate of enrolling 80% of eligible people by Dec. 3, 2003, only to get a last minute push thanks to the endorsement of Wolf, who essentially declared that he believed the fund had been "fixed" because he'd talked to Feinberg and endorsed him as a good person. It's all a little bit too pat and vague. There's nothing tangible onscreen to suggest that Feinberg had a change of heart or learned something he didn't know before (we see him talking to various survivors in person, something he didn't do early on, but that's about it).

It's particularly frustrating because "Worth" is in every other way an excellent film, distributing its attentions democratically among a large cast of characters, and giving a number of supporting actors and bit players spotlight moments that don't just illuminate the issues involved (including Laura Benanti and Chris Tardio as, respectively, the wife and brother of a slain firefighter), but call the usual mechanisms of star-driven Hollywood storytelling into question.

Borenstein's script and Colangelo's direction are constantly reminding us that this is the story of a community and a nation, taking care to stage moments in wide shots whenever possible, so that you're aware of the architecture of offices, hotels and family homes, and including lots of strangers in the background and/or foreground any time two characters are having an intimate conversation in a public or semi-public space. "Worth" seems to get it, all of it, in a way that films of this type rarely do, which makes it all the more irritating when it appears to retreat from the implications of the way it's telling its complex narrative.

The reluctance to tear down restrictive storytelling templates rather than merely jostle them a bit is of a piece with the film's refusal to really engage with the question of whether a CEO's life is worth more financially than a janitor's. Certain hierarchies and structures end up being preserved here, despite the film's having made a point to call them into question. 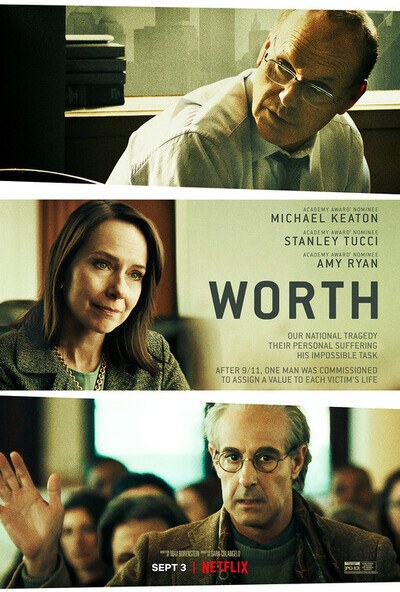 Rated PG-13 for some strong language and thematic elements.