The real-life facts are beyond horrifying. Between 2005 and 2009, 150 women and young girls were drugged and then raped by men in their secluded Mennonite community in Bolivia. The women would wake up having no idea what happened, but seeing blood on their sheets and legs, or noticing their underwear was missing. The age range of the victims spanned from 5 to 65. As we've seen in other closed religious systems, Mennonite communities normally handle such things in-house. But this time, the elders of the community (all men)—who got suspicious and decided to follow one of the men at night, thereby catching him in the act—reported the crime to the Bolivian authorities. The eventual trial, where the victims showed up to testify, was a sensation. Eight men were sentenced to 25 years in prison.

Canadian author Miriam Toews, who grew up in a small Mennonite community in Manitoba, had a strong empathetic response to this story. "I could have been one of [those women]," she said in an interview. Her resulting book, 2018's Women Talking, is not so much a recounting of those events, but an imaginative response to them. In her fictionalized version, all the men of the community head to town to put up bail for their arrested brethren. The women meet in the barn and discuss their options, boiled down to three: 1.) Do nothing 2.) Stay and fight 3.) Leave the community.

They debate the subject for a day and a half. They ask the only man left—a former apostate named August, who has returned to the community as a schoolteacher—to "take the minutes" of their meeting. (None of the women can read or write.) "Taking the minutes" is an artificial device, but it's the book's organizing principle. The entire book is made up of August's minutes: his thoughts, his digressions into his own history within the group, and his crush on one of the women. Everything you read in the book is "written" by August.

So, it's "women talking," yes, but it's women talking as told by a man (as created by a novelist, who happens to be a woman). The layers here are either problematic or fascinating, depending on your perspective. Sarah Polley's film adaptation removes a couple of layers of this artifice: August (Ben Whishaw) is present, scribbling away on the periphery, but he is not the narrator, although August's crush on the dreamy optimist Ona (Rooney Mara) is still there. The "women talking" move front and center. Polley's adaptation doesn't quite deal with the ramifications of this point-of-view shift. August can't get into their interior lives, what it's like inside their hearts, so he just writes what they say and what they do, trying not to editorialize. Some of that imposed distance still remains in the adaptation.

One of the strongest elements of the film is the debate itself, much of which is lifted wholesale from the book. There's a thrill in watching a group of people hashing things out, arguing with a purpose. "12 Angry Men" has the same structure. And there's a scene in Jafar Panahi's "No Bears" where an entire village gathers together to decide what to do about their visiting guest (Panahi himself). On the wildland border of Iran and Turkey, in that small stone structure, is democracy at work. That's what happens in "Women Talking." Ground needs to be conceded in order to move on but moving on doesn't happen in a straight line.

Even the 'tween girls in "Women Talking" are privy to the debate: whatever is decided will affect them. Some of the debates lean into the spiritual: the only pathway to heaven is here in this group. Does leaving mean no more heaven? There are other questions. If they stay, will they have to forgive their rapists? Could they? If they decide to leave, can the boy children come with them? At what age is the cut-off? At what point can you say "It's too late" for this or that boy to un-learn his conditioning?

We're told movies are a "visual medium," right? And, of course, they are. Scenes where people talk for too long are often deemed "uncinematic," or "too much like a play." As always, there are so many exceptions to a so-called "rule" like this it's not a "rule" in the first place. People talking to each other can be "cinematic," if the dialogue is good and the acting holds your interest. Ethan Hawke and Julie Delpy talking for the entirety of the "Before" trilogy is plenty cinematic. Asghar Farhadi's films feature intricate scripts where the characters discuss weighty moral and ethical subjects in every scene, debating this or that point of view. They are thrilling films. Sarah Polley's trust in the material—and her actors—allows for the performances to flourish, and the performances drive the story along with the barrage of words.

Polley's cast is a murderer's row of talent. Jessie Buckley plays Mariche, a woman suffering horrific abuse at the hands of her husband. Buckley's playing of it tends towards the sarcastic, complete with eye-rolls, which is not necessarily the strongest choice. Claire Foy fares better as Salome, so infuriated by what has happened she attacked one of the men with a pitchfork, discovering she has murder in her heart. Foy is a powerful presence, and her rage is incandescent. The great Judith Ivey plays Agata, and the equally great Sheila McCarthy plays Greta, the two elder women bringing wisdom and authority to the table (but also shame: they raised their daughters in this environment). Michelle McLeod, Kate Hallett, and Liv McNeil play smaller roles but make very large impressions. Frances McDormand shows up a couple of times as "Scarface Janz," heading up a small faction of women who don't participate in the debate because they have already chosen to stay. Another peripheral character (more so in the book than the movie) is Nettie (August Winter), who—after being raped and impregnated—starts wearing boy's clothes and asks to be called Melvin. Melvin has been rendered mute by the trauma, and only feels safe with the children, looking after them while the women debate.

And then there's Ona, played by Rooney Mara. Labeled a "spinster," she was raped and is now pregnant. She is a curious woman, a gatherer of facts (about butterflies, stars, the natural world), and even calm enough in her heart to forgive her rapist, or at least argue the point that he wasn't born a rapist. It's akin to a #notallmen argument. Ona is almost too good to be true, but Mara gives a beautifully open performance. While there is a whiff of Mennonite-manic-pixie about the character conception, Ona is also surprising. You're never surprised at what Buckley's Mariche says, she's more of a broad "type," but you're never sure what is going to come out of Ona's mouth. No wonder August is smitten. Ben Whishaw is heartbreaking and completely believable.

While the debate is fascinating in its particulars—and could be used as a model for debate practice—there's something rather formal in the result, betraying the artifice of the original source. The women in Bolivia were heroic for coming forward to testify against their rapists (men they knew) in court, and in so doing they broke with every tradition they knew. They put themselves "beyond the pale" of their own conditioning and told their stories in front of the world. Their act took tremendous courage. Toews' made-up debate seems like an intellectual exercise in comparison. 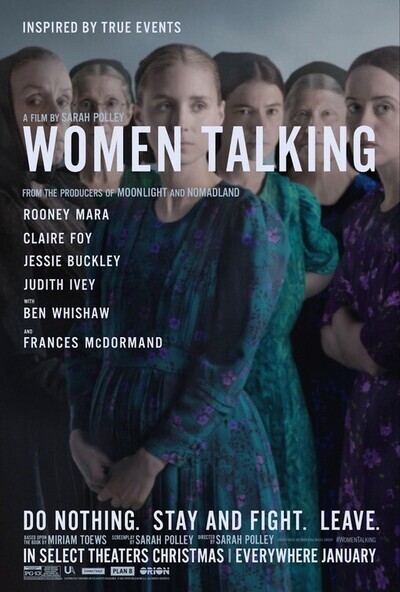