"Wolf Creek 2" isn't much different than "Wolf Creek," but it is markedly worse. In the Australian-set slasher sequel, writer/director Greg McLean's focus shifts from clueless tourists to outback baddy Mick Taylor (John Jarratt), the original film's hickish serial-killer antagonist. In an introductory, pre-credits scene, McLean re-introduces us to Mick. He's a hateful parody of the chauvinism inherent in Paul Hogan's Crocodile Dundee character (also named Mick). After being threatened with a ticket, he blows out a young policeman's brains, then guts, and burns alive an older cop. This initial scene is effectively gross because McLean ("Wolf Creek," "Rogue") knows how to build suspense visually. He's a technically accomplished storyteller. The problem is that both "Wolf Creek" films are grounded in ugly and maddeningly indistinct stories.

The main difference between "Wolf Creek" and "Wolf Creek 2" is that "Wolf Creek 2" takes place under a blazing high sun while "Wolf Creek" is choked by darkness. In "Wolf Creek 2"'s opening scene, McLean pounces on viewers, and confronts them with the knowledge that Mick is not as innocent as he seems. This ostensibly makes Mick more menacing, but it also automatically makes him a little less imposing. McLean later tries to explain away Mick's psychopathy by making him xenophobic. But while Mick baldly tells a British tourist that he's "foreign vermin" that needs to be exterminated, Mick also kills Australian local cops and bystanders. Mick's over-exposed in "Wolf Creek 2," making him as scary as a bad case of deja vu.

While "Wolf Creek 2" has the same basic plot as most post-"Texas Chainsaw Massacre" slasher films, the one horror film that it's most like is Rutger Hauer vehicle "The Hitcher." McLean acknowledges that similarity by naming one of Mick's victims "Rutger." Like "The Hitcher," most of "Wolf Creek 2" is a straightforward, relentless chase: Mick stalks young, hunky tourist Paul (Ryan Corr) across South Australia. But every time Paul tries to escape or get help, Mick stops him. There's one or two diverting pit stops along the way, particularly a gruesome trivia contest that Mick and Paul play late in the film but, by and large, "Wolf Creek 2" is a monotonous, miserable game of Mad Libs.

In "Wolf Creek 2," McLean knowingly offers the same old stuff with minor variations. "Wolf Creek 2" even starts with the text scroll that kicks off "Wolf Creek"—"The following is based on actual events. 30,000 people are reported missing in Australia every year. 90% are found within a month. Some are never seen again." The key difference between these two films is "Wolf Creek 2"'s tone is superficially lighter. In the last film, Mick gutted, stabbbed, shot, and cursed out his victims. In this one, he tells bad jokes after he kills strangers, establishing him as the down under answer to Freddy Krueger. For example, when Mick plucks out a human heart, he chortles "Oh no, rip your heart out!" And when kangaroos bash up his truck, he sneers, "Oh no, flying kangaroos!" These queasy jokes are unintentionally draining, and they make it impossible to care if Mick is stopped or not.

What rankles most about "Wolf Creek 2" is its fruitlessly bleak perspective. It is, in that sense, not much different than "Wolf Creek." Both films are viscerally disturbing, but they're also both perilously forgettable. McLean's good at shocking you, but his fundamental weaknesses as a storyteller—both "Wolf Creek" films are tonally queasy, and feature dismally wan characterizations—make "Wolf Creek 2"'s extreme violence gratuitous. Yes, there is technically nothing gratuitous about ultra-violence in a film for which the main selling point is gore. Unfortunately, there's also nothing else to latch onto in "Wolf Creek 2." Kangaroos go splat, tourists run for their lives, and a killer ham goes on the prowl again. All that's missing is a reason to care. 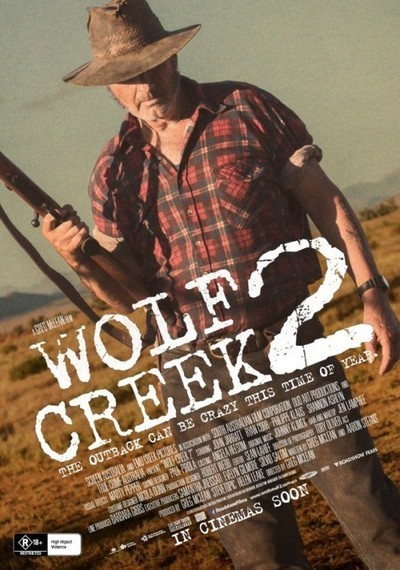