When You Finish Saving the World

There's a moment in "When You Finish Saving the World," written and directed by Jesse Eisenberg (based on his 2019 audiobook), when Evelyn (Julianne Moore), a rigid, fragile social worker who brings "good intentions gone awry" to a new level, declares, "I am constantly striving to have my character live up to my ideals!" This is not a pose. She is truly in agony about this. Her real life doesn't match her ideals. She misses the mark sometimes. Welcome to the human condition, Evelyn. Evelyn's blind spots are bigger than her actual personality. This is a problem for someone devoted to helping those in need. (It's a problem for anyone.) Evelyn works in a shelter for victims of domestic abuse, and her interactions with staff and residents are tense. Everything is filtered through "her ideals," making her cautious and too eager. Frankly, she weirds people out. I'm weirded out just watching Moore's performance. She plays it high-strung, bordering on caricature. Evelyn's declaration about finding it hard to live up to her ideals is the main grappling point for almost every character in "When You Finish Saving the World." Ideals are one thing; messy real life is another.

Evelyn's teenage son Ziggy (Finn Wolfhard) is awkward and arrogant (a terrible combo, although not so out of the ordinary). He has no friends, and lives for his social media channel, where he performs songs on livestream to a worldwide audience. He keeps tracks of subscribers and up-votes and likes, throwing it in the face of anyone who dares to not take him seriously. His parents, played by Moore and the wonderful Jay O. Sanders, are intellectuals with easily mockable pretensions. Ziggy's dad asks his son about the music he's writing, barely waits for the answer before cautioning him not to play "rhythm and blues," because "Amiri Baraka was quite clear on this." Ziggy doesn't know who Amiri Baraka is and doesn't care. Evelyn wonders what happened to her little "ally" son, the child she took to marches, who used to sing protest songs on his little plastic guitar. Ziggy treats her with open contempt. She tolerates it, and cries in the car as she drives to work.

A little of this goes a long way, and there's a lot of it in "When You Finish Saving the World." When Ziggy develops a crush on Lila (Alisha Boe), a politically-minded girl at school, he decides to "become political” in order to impress her, or at least be able to keep up with her in conversation. Lila is amazingly tolerant of this weird kid following her around, trying to "be political" with her. Meanwhile, Evelyn re-directs her thwarted mother love onto Kyle (Billy Bryk), who recently moved into the shelter with his mom. Kyle is a good kid, polite, and responsible, everything Ziggy is not. Kyle works in a body shop, and he enjoys it, but Evelyn can't hide her middle-class liberal-snooty-horror at this job and starts blabbering about how maybe he could get a scholarship to Oberlin, even though he clearly doesn't want it. What is wrong with working on cars, Evelyn? Evelyn's blind spot again. She thinks it would be a "waste." Her behavior tilts into downright creepy, just as Ziggy's behavior towards Lila borders on the creepy.

The whole movie is about projecting your own needs onto other people, seeing in them what you want to see, or seeing in them a skewed mirror of your own hopes for yourself—ideals war with reality. Evelyn cares for the abused women in the shelter but can't talk to them without condescension. She works to help others but can’t connect with her son. Ziggy says he wants to learn about politics, but only to profit from it on his live stream. He has a platform. He could save the world!

Is this satire? It's hard to tell. The characters are broadly drawn and mostly broadly played, so much so that the film plays like a skit about clueless do-gooder liberals. Lila and Kyle are the only characters who seem connected to the world and themselves. Their baffled, almost embarrassed responses when dealing with Ziggy and Evelyn's projections onto them is understandable.

Eisenberg is a good writer when tuned in to the absurd. Evelyn is so socially awkward that when she compliments the receptionist at the shelter, the receptionist says, "Are you firing me?" The scenes at the afterschool teenage hangout, where kids get up and recite political poems, or do experimental skits, are very funny. Lila gets up and reads a poem about the Marshall Islands and Ziggy is awe-struck by the fact that she knows things about the world, that she cares about something outside of herself. The scenes between Evelyn, Kyle, and Kyle's increasingly irritated mother, are well-observed, as is a scene where Evelyn gets irritated when Kyle and a translator speak in Spanish, leaving her out of the loop.

But what's the point of view? Julianne Moore's Evelyn never takes shape as an actual person living in the world. The shelter is dealt with in a cursory manner. Kyle and his mom are intriguing, but they are used mostly as plot points to create the mirror-image journey of Evelyn and Ziggy.

One scene stands out. Ziggy is determined to join Lila's group of friends, but he knows he has to up his political game in order to be taken seriously. His attempts are just as awkward as Evelyn trying to talk to the receptionist. One day, though, he sits down with them at lunch, and Lila and her friends are talking about the pros and cons of tongue piercing. They're laughing, raucous, and having fun. Ziggy is disappointed in Lila. He thought she was deep. He thought she was political. Why is she talking about something so frivolous? This is fascinating. This rings so true! It's a brief moment, here and gone in a flash, perfectly illustrating the film's interest in ideals vs. reality, but the scene does so in a more nuanced and thoughtful way than the fish-in-a-barrel approach to the rest. 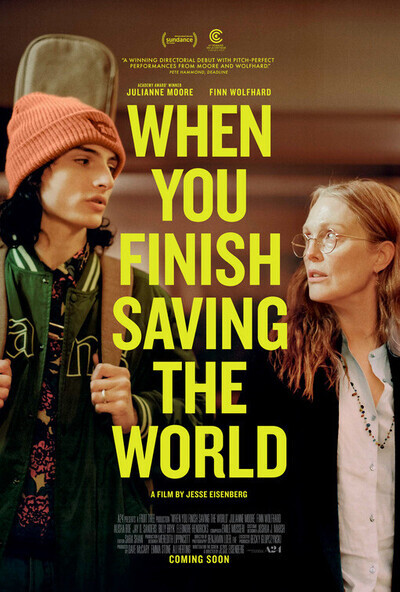