When We First Met

The concept of “When We First Met” sounds like it could be offensively atrocious if it leaned too far into the possessiveness of its premise. And it's probable that some people will be offended at the very idea of a man-child who gets to relive the same day over and over again just to get out of the friend zone with a girl he’s been infatuated with for the last three years. It’s hard to imagine a concept further removed from today's cultural moment of empowerment than that of a spoiled dude-bro being given multiple chances to bed his object of desire. The truth is that “When We First Met” is too benign to be offensive. It’s a surprisingly dull affair, enlivened occasionally by star Adam Devine’s willingness to do anything to get a laugh and a charming supporting turn from Shelley Hennig, but one of those movies that feels shockingly long for its actually short running time. Ultimately, no one could save the script by John Whittington, who relied so completely on his concept that he failed to write jokes or characters.

The star of “Workaholics” and “Mike and Dave Need Wedding Dates” leads the film as Noah Ashby, a jazz pianist (yes, seriously) who can’t get over the most memorable meet-cute of his life. Three years ago, Noah went to a Halloween party (dressed as Garth from “Wayne’s World”) and literally ran into a beautiful young lady named Avery (Alexandra Daddario of “San Andreas”) dressed as Geena Davis' character from "A League of Their Own." They chatted the night away, went to his piano bar, took some photos in a booth, and even went back to her place. In a possibly romantic moment, Noah leaned in for a kiss … and got a hug. He fell deep into the friend zone. Three years later, he’s attending Avery’s engagement party to Ethan (Robbie Amell) and getting drunk to hide his misery. Fate will intervene in the form of a magic photo booth that sends Noah back to that fateful evening and gives him a chance to rewrite his life with Avery over and over again.

It’s hard to believe no one tried the “Rom-Com Meets Groundhog Day” thing before but perhaps it’s because the concept runs out of steam before the movie is even half over. Surprisingly, “When We First Met” doesn’t even engage that much with its premise, showing us only a few run-throughs of alternate timelines for Noah and Avery, with asides from best friends played by Hennig and Andrew Bachelor. In one, he pulls out all of the stops to prove how much he knows about her. In another, he plays the asshole card, being the cool guy who barely cares—but that changes him in ways nobody likes. In yet another, he moves from piano to a white-collar life, but even that doesn’t lead to domestic bliss. The problem is that none of these timelines are interesting. “When We First Met” simply isn’t funny. And the romantic trajectory of the film is obvious from scene one—hint: this is the kind of movie that only has two female characters if the other one is going to eventually be someone's romantic interest too.

Netflix has been accused lately of delivering films and TV shows that are easily used as background material, and "When We First Met," with its repetitive nature and lack of characters, certainly qualifies as something to watch while you play games on your smartphone. There are beats and scenes that save “When We First Met” from complete disaster, whether it’s Devine singing “Back in Time” or the genuinely winning performance from Hennig. And yet those are offset by scenes in which it feels like someone wrote on a whiteboard, “the phrase ‘doggy style’ is funny.” Most of all, “When We First Met” just falls into a style gap. It’s not broad enough to be offensive or silly. It’s not realistic enough to be emotional or moving. It’s just … there. It’s like being at a crowded restaurant and eavesdropping on the same bad first date over and over and over again. You’d probably want to move tables. 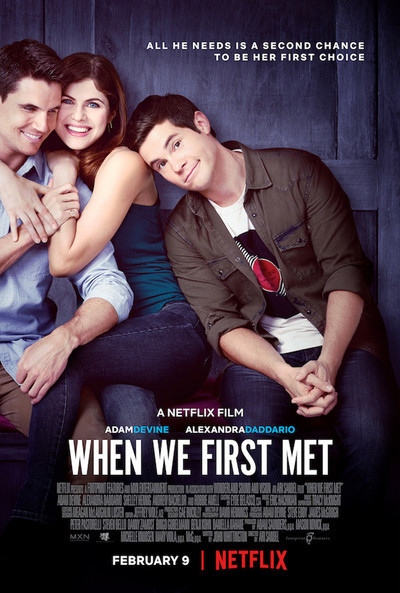