What the Constitution Means to Me

The word “timely” has gotten a hell of a workout over the last several years. That’s what comes of living on a knife’s-blade moment in history. We balance, teetering, on a thin slip of stability, diamond-sharp and diamond-precious. At such times, stories cannot help but take on new resonance. Yet in this moment, in which pretty much anything can suddenly feel almost painfully relevant, the arrival of Heidi Schreck’s “What The Constitution Means To Me” on Amazon Prime in this of all weeks is on another level. It’s a towering achievement, a work of devastating clarity. It’s also funny, compassionate, and surprising, and somehow, in spite of everything, in possession of a bright flare of optimism. To watch it is both painful and vital, like taking a great deep breath with a set of broken ribs. It will hurt. The pain is worth the reward.

Captured in the final weeks of its 2019 Broadway run with thoughtfulness and elegance by Marielle Heller, “Constitution” is on the surface remarkably simple. (While Heller superbly directs the film, the stage production was helmed by theater director Oliver Butler with equal grace, skill, and insight.) Schreck plays herself, recounting the story of how she traveled the country as a 15-year-old, competing in constitutional debates in American Legion halls to earn scholarship money for college. When playing her younger self, she dons a yellow blazer and calls it a day; she tells her audience, who she asks to serve as the old white men she’d speak to during these events, that the set was conjured from her memory, but alas her memory forgot to include a door. It’s friendly, casual, not so much breaking the fourth wall as not bothering to put one up in the first place, and the lack of artifice underlines that approachable tone, as does Heller’s frank yet gentle approach behind the camera. We’re just talking, Schreck seems to say with each choice; we’re all just here talking, no big deal.

But it is a big deal, and Schreck’s choice to forgo more grandly theatrical choices imbues “Constitution” with immediacy, vulnerability, and honesty. Dwelling largely on the ninth and 14th amendments, Schreck digs into the beauty, contradictions, and especially the failures of the United States Constitution by looking at it through several lenses: that of her at 15, at 20, as a young woman, a grown woman, as a daughter and granddaughter and great-granddaughter. (She is also, as she notes in one of the play’s best jokes, a big fan of men; “I’m the daughter of a father,” she deadpans, hand on heart.) It’s about her family history, and the history of the United States; it’s about what exclusion from the preamble has meant for her life, and what it means for women, people of color, LGBTQIA+ and non-binary people—and particularly for trans women and women of color—every day.

Inevitably, the work that Heller’s film of “Constitution” will get compared to most frequently will likely be Thomas Kail’s film of the original cast of “Hamilton”—proximity of release, subject matter, and of course format all invite the comparison. (Lin-Manuel Miranda’s Angelica Schuyler wants Thomas Jefferson to “include women in the sequel;” Schreck’s play asks whether the original needs a rewrite or if the whole thing needs to be canceled and rebooted with a new cast and script.) But in its approach it hearkens back much more to documentarian Jennifer Fox’s 2018 narrative feature “The Tale,” which chronicled Fox’s childhood sexual abuse by examining her own perspective and employing the tools of fiction to both add and remove personal distance. The past is past, the present is present, and both are constantly happening at once.

To say more about Schreck’s impeccably structured, remarkably thoughtful text is to diminish the experience of watching it unfold, but there are a few elements that demand mention, one of which may play even better on film than it did in the theatre. While the above paragraphs may suggest that Schreck’s play is a one-woman operation, she’s not alone on stage for long, as actor Mike Iveson enters, playing both himself now (as Schreck does) and a legionnaire there to make sure that Heidi and her unseen fellow debaters follow the rules to the letter. His is a largely silent, unsmiling presence, watchful and remote, there to enforce rules that he or men like him wrote. More importantly, though, he’s there simply to be there, a man watching and listening as Schreck peels back layer after layer, addressing abortion, consent, domestic violence, and the many ways in which the document her 15-year-old self so loved has failed her and countless other women for generations. Yet the relationship is not a static one, and Heller captures Iveson’s steady presence and Schreck’s keen awareness of it with sharp-edged subtlety. It’s all in the framing—a statement which, come to think of it, also applies to certain interpretations of constitutional law.

But Iveson isn’t Schreck’s only onstage companion. In the film’s final moments, Schreck is joined onstage by Rosdely Ciprian, a New York high schooler and debater who squares off against Schreck in an unscripted but staggeringly well-prepared debate on the question of whether or not the constitution of the United States should be abolished. Schreck’s play is astonishing, her performance unforgettable, but it’s in these closing moments that “What The Constitution Means To Me” achieves its final form: proof, visceral and thrilling, that our future can be a remarkable one if we fight to jam the door open just a little bit wider. The pandemic halted the national tour of “Constitution,” as it did virtually all live theatre, and no film, however remarkable, can replicate the experience of seeing it live. But Heller’s film comes damn close, particularly when her camera captures Schreck and Iveson’s faces, alight with pride and joy and something like optimism, as Ciprian brings down the house. The future is uncertain, and pain is inevitable. And yet when Ciprian says “We the people,” “Constitution” doesn’t feel “timely.” It feels like a promise—albeit one we have to earn. 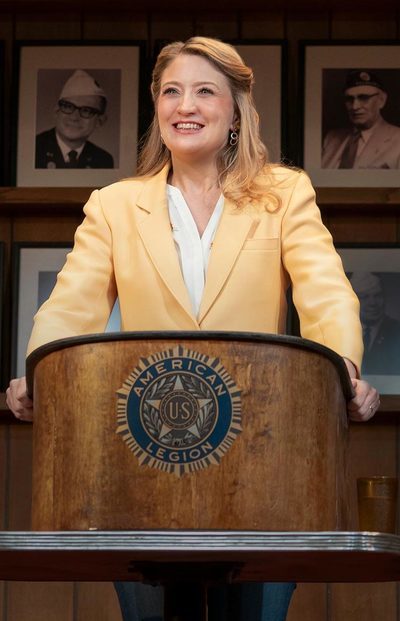 What the Constitution Means to Me (2020)