Despite what the title might suggest, “Western” is not a traditional oater by any stretch of the imagination. Instead, German director Valeska Grisebach, making her first film since 2006’s “Longing,” uses a number of narrative tropes and bits of iconography that will be familiar to fans of the genre to present viewers with a modern-day meditation on subjects ranging from toxic masculinity to the tensions and occasional triumphs that can arise when two disparate cultures are thrown together. The result is a slow burn of a drama with a restrained tone that may put off some viewers, but which will captivate those who responded to its low-key wavelength.

As the film opens, a group of German workers have been sent off to a remote area of the Bulgarian countryside near the border with Greece, in order to begin construction of a hydroelectric power plant. Consciously or not, many of them adopting an immediate sense of superiority towards what they presume to be the backwards area of the world that they are bringing into the modern world with their technological know-how—their sense of superiority coming through in acts ranging from posting a German flag over their worksite as though they were some kind of conqueror to the way in which one of them harasses a trio of local women swimming nearby. If one were to call them out on these micro-aggressions, they would almost certainly claim that they meant nothing by them, but they appear to be largely incapable of realizing how badly they are coming off to the locals.

The exception in the crew is Meinhard (Meinhard Nuemann), a recent addition who keeps largely to himself and does not join in with the horseplay of the others, much to the consternation of his co-workers, especially the increasingly hot-headed Vincent (Reinhardt Wetrek), the one doing the harassing of the swimmers. One day, while off on his own, Meinhard comes across a white horse in a field and rides it into the nearby town, ostensibly to buy some cigarettes but presumably also to encounter the locals without having his fellow workers escalate tensions through their boorishness. Things get off to an uncomfortable start when a woman in the store refuses to do business with him because of his German heritage but Meinhard simply rolls with it rather than ramps things up. He eventually befriends a number of the townspeople, chiefly Adrian (Syuleyman Alilov Letifov), the area’s powerful stone merchant and owner of the horse, and his nephew, Walko. As the plant construction drags on, Meinhard makes more frequent journeys into the town and while he and the townspeople do not share a common language, they take the time to find a way to communicate with each other through simple phrases and gestures and through their sometimes awkward conversations, we begin to get a better sense of who the seemingly mysterious Meinhard is (we discover that he is a former Legionnaire and that he had a brother who is now deceased) and that these locals, rather than his countrymen back at the site, are providing him with the sense of community that has been absent from his life for far too long.

Although “Western” may sound slightly formulaic regarding its basic plotting, Grisebach finds an approach to the material that eschews melodrama for a more naturalistic approach—ranging from a visual style that observes most of the action from a certain remove and without flashy camera moves or rapid-fire editing to a screenplay said to have been largely improvised. On the one hand, the film’s extremely relaxed pace and lack of an overt dramatic arc for Meinhard will probably end up frustrating some viewers who may find it to be a little too meandering for its own good. At the same time, Grisebach does an excellent job of showing the loner Meinhard as he begins his initially tentative attempts to communicate with the villagers and unexpectedly finds common ground with them. She also does a good job of quietly developing the tensions between Meinhard and both his fellow crewmen and the villagers who are less than thrilled to have a German in their midst so that there is an additional level of potential menace throughout that is always threatening to boil over into something more. The look of the film is also quite striking at times in the way that it observes the events in a restrained and realistic manner that makes us feel as though we are observing real life while at the same time occasionally weaving in shots deliberately evoking the Western genre ranging from the loner riding into town on horseback to visual quotes from classics like “My Darling Clementine.”

What really helps to sell the documentary-like stylings of “Western” is Grisebach’s decision to, as she did with “Longing,” employ non-professional actors in the roles. As anyone who saw “The 15:17 to Paris” can attest, the casting of non-professionals is a risky proposition that can have disastrous results if those chosen cannot hold viewer interest for a couple of hours. That is not the case here as the people cast by Grisebach fit nicely into their roles without ever betraying their amateur status. Chief among them is Neumann, an auto worker by trade who commands the screen in a manner that reminded me a bit of the great Sam Elliott (and not just because the two have similarly glorious mustaches)—even when he is just standing there quietly observing what is going on around him (which is often), he holds your attention in a manner that puts most full-time actors to shame. I have no idea if he plans to continue with acting or not but based on his work as the beating heart that brings “Western” beautifully to life, he has the goods to give up the day job and pursue it with results hopefully as strong as those that he demonstrates here. 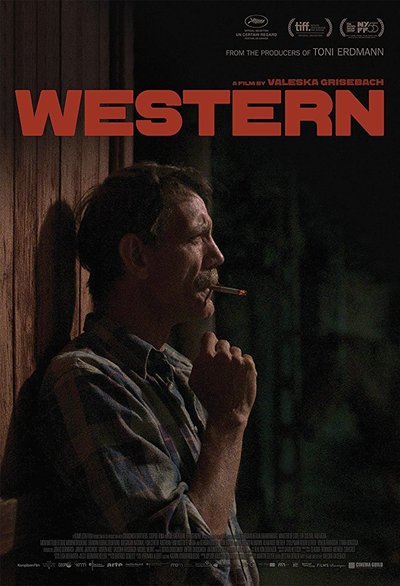