Henry Selick is back, and animation really missed him. With LAIKA on a long hiatus, Pixar struggling in its current phase, and Studio Ghibli quiet until Miyazaki finishes his final film, it’s been a little dire out there in the world of family entertainment. And so the creator of “A Nightmare Before Christmas” and “Coraline” premiering a new project at TIFF before its October Netflix bow felt like a wonderful shock to the system. At first, the kinetic creativity of Selick’s “Wendell & Wild” is almost overwhelming. It feels like “A Nightmare Before Christmas,” it kind of looks like “Coraline,” it’s SO punk rock. Add in the fact that Jordan Peele co-wrote the project, and voices one of the title characters along with his comedy life-mate Keegan-Michael Key, and this movie simply explodes with artistic fire. Almost too much. At 105 minutes, it’s a little overladen, as Selick and Peele over-complicate their storytelling with subplots and even commentary on the prison industrial complex. However, there’s no denying that this is a world that animation fans will just want to explore, to live in, to savor. It’s been too long since we got a window into Henry Selick’s brain and it’s still an amazing view.

Kat (Lyric Ross) doesn’t just have theoretical demons—hers have names. After her parents died in a car accident that she blames on herself, Kat became hardened to the world around her, ending up at a boarding school run by a mysterious nun named Helley (Angela Bassett) and bitter about every possible interaction with the kids around her. Father Bests (James Hong) runs the place supportively enough, but he’s getting pressured by an evil business entity in the area that’s trying to buy up as much real estate as possible to build a prison. Kat greets life with green hair, a snarl, and a fist, and the only other kid who seems to have any idea how to communicate with her is Raul (Sam Zelaya), himself an outcast from the cool kids group.

Meanwhile, demons Wendell (Key) and Wild (Peele) toil in the underworld, working on the massive frame of their Satan wannabe father Buffalo Belzer (Ving Rhames)—they literally live in his nose. While Belzer torments lost souls in a theme park of the damned, Wendell & Wild plant hairs with a device that drills holes and squirts hair cream. Wild likes to eat the hair cream, which gives him a funny feeling in his tummy and makes him a little high. But everything changes when Wendell & Wild discover that the cream can also bring things back to life. When Kat is chosen as a “Hellmaiden,” Wendell & Wild become her demons, and they have a plan to trade their newfound magic cream for something Kat can’t turn down.

Of course, the manifestation of grief or trauma into physical form isn’t a new thing in animation but Selick and Peele’s approach feels different in that it never traffics in pity. Kat isn’t a fragile creature overcome by her demons—she’s a Hellmaiden, dammit. Ross is excellent, never leaning into the cliché of the rebel girl and embodying the conflicting emotions of a confident young woman who happens to deeply miss her mom and dad. On other side, Key and Peele are expectedly fantastic, reportedly spending a lot of time riffing off each other in the studio, and then the animators worked with their raw, improvised material. They nail that classic animated archetype of characters just dumb enough to do something dangerous.

However, Wendell & Wild aren’t really the villains. One of the funny things about Selick’s approach is that the film basically suggests that there are worse things on Earth than demons in Hell—those who profit off the misery of others. The material about corporate monsters who are literally willing to murder for profit gets a little lost in the storytelling at times—that comparison could have been more sharply drawn—but it feels so true to Selick’s visions that the traditional “bad guys” in this story aren’t the real villains of the piece.

Of course, the real draw of “Wendell & Wild” is the visual whimsy of Selick, and it’s on full display here from the first frames. I wanted to just walk around this weird and wacky world, one that’s always perfectly calibrated in that compositions don’t have to be cluttered to be effective. On the contrary, Selick and his team often focus on their characters, placing them in nondescript settings and letting us appreciate the artistry of the character design. Selick’s strength has always been in that department—think Jack Skellington or Coraline—and his creations here are among his best.

In fact, the only flaw of “Wendell & Wild” is that Selick doesn’t let us take in enough of his sights and sounds, forcing in a few too many characters and storylines. This is the kind of movie in which the imagery does the storytelling—well, that and awesome needle drops from Living Colour, Death, TV on the Radio, and more—and so less is more in terms of actual plot. However, it’s a relatively minor complaint for a film that I expect a lot of people to take into their hearts just as they did Selick’s previous works. Now, which demon do we need to conjure to make sure he doesn’t take so long to do it again?

This review was filed from the world premiere at the Toronto International Film Festival. "Wendell & Wild" premieres on Netflix on October 21. 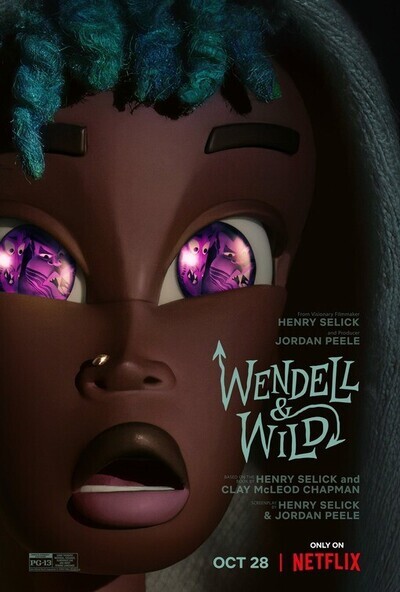 Rated PG-13 for some thematic material, violence, substance use and brief strong language.