“Weird Al” Yankovic stands at the precipice of greatness and next to some hot dog buns when he has another eureka moment. At a party packed with the real Yankovic's spiritual influences—including Andy Warhol, Gallagher, Elvira, Tiny Tim, Devine, and Pee-Wee Herman—the ascending parody artist is challenged to show his skills on the spot, to come up with another parody. With an accordion in hand and his bandmates’ hand-farts and suitcase providing percussion, Daniel Radcliffe’s version of “Weird Al” turns Queen’s “Another One Bites the Dust” into “Another One Rides the Bus,” lip-syncing Yankovic’s voice with the same volcanic intensity as Eminem rap-battling for his life in “8 Mile.” It’s one of many sarcastic flashes of genius in this biopic, but it does have BBQ attendee Salvador Dalí reacting, “‘Weird Al’ will change everything we know about art!”

However serious you take that exclamation, it comes from a perfect centerpiece scene for “Weird: The Al Yankovic Story,” a pop music phantasmagoria that’s equally egoless and entertaining. Co-written by director Eric Appel and “Weird Al” Yankovic, “Weird” distills what has kept Yankovic a subversive force on the Billboard charts since the 1980s to create one of the funniest movies of the year.

The plotting of “Weird: The Al Yankovic Story” is its own big joke, a fever dream by a self-deprecating entertainer looking into a funhouse mirror. Yankovic did become a legendary accordion player thanks to a door-to-door salesman; Madonna (played here by Evan Rachel Wood, relishing every bubble gum chew in a comically villainous role) did request that Yankovic parody her song "Like a Virgin,” leading to the birth of Yankovic’s “Like a Surgeon”; Yankovic did record songs like “I Love Rocky Road,” “My Bologna,” and Michael Jackson parody “Eat It,” proving that parodies can be commercial in an evolving music business. But the giddy thrill of "Weird" is the rollicking ways it takes to hit these points while spoofing the wholesomeness of Yankovic’s image. The real “Weird Al” does not drink to excess, take hallucinogens, or rip off his Hawaiian shirts on stage to bear a six-pack. This version hilariously does, which itself is an act of preserving humility about who “Weird Al” truly is.

This movie flourishes with absurd opposites; take Yankovic’s loving parents, who are now imagined here as the bitter inspiration for his success. His father (Toby Huss) wants him to take on a life “at the factory” (a funny ongoing joke) and has forced Yankovic to become a closeted accordion player (his mother, played by a tender Julianne Nicholson, bought it for him secretly). It’s an imperfect foundation for the comedy: it inspires sweetness from young Al and a hilariously over-the-top reaction, as when the boy's first parody causes his father to yell, “What you’re doing is confusing, and evil!” But it also hews a little too close to “Walk Hard: The Dewey Cox Story,” a previous music biopic comedy that dominated such tropes behind the Tortured Great Musician, which always starts with elusive parent validation.

But “Weird: The Al Yankovic Story" has many of its own ideas, breaking from the true story with zeal. This fracture happens right about the time Yankovic is given guacamole laced with LSD by his real-life mentor Dr. Demento (Rainn Wilson) and during an animated acid trip writes a song called “Eat It,” which the real Yankovic and Will Forte (as smarmy executives) then confirm is “100% original.” The success turns this “Weird Al” into the most popular recording artist of all time, and People deems him the “Sexiest Man Alive.” When Oprah (Quinta Brunson) interviews him, he wears mini platinum records around his neck.

A plot line about this "Weird Al" wanting to then only write original songs is especially inspired, as Yankovic has countless gems that are highly literate parodies of a band's entire discography—they just don’t play on the radio. In this version, "Weird Al" believes that only original songs will make people take him seriously as an artist. It requires retconning of all of pop music history for this movie to make that possible.

The script is full of such amazing fakeouts and downplays, and instead of losing momentum by feeling like it's just stretching its “Funny or Die” skit origins, its plotting often zig-zags and then goes turbo on a bit for 10 minutes. “Weird” beats the accusation of being “a feature-length version of a skit” by not trying to play the more formal narrative game that has undone countless "Saturday Night Live" movies and made that phrase a modern diss. And its editing, with rhythms inspired by “Airplane!”, builds to incredible pay-offs (a couple including amazing references to something called a “hay boy”). Even its ending is jaw-dropping and laugh-out-loud; it’s one of Yankovic’s most wholesome-extreme jokes he’s ever made. The closing credits had me in tears.

Radcliffe is perfect as Yankovic, starting with the actor’s control of his artistic image, which has previously allowed him to be as seriously compelling as a farting corpse ("Swiss Army Man"). He completes what makes this parody of Yankovic’s clean-cut image so funny—the vivid innocence that soon turns into a brash arrogance, fueled by the desire to prove himself to his parents and the world. It's fitting when Radcliffe’s version of Yankovic is thrown into an elaborate action scene that explodes out of nowhere, with Radcliffe’s physicality and game nature adding to the movie’s overall joke and joy. Radcliffe’s performance is vulgar without violating the anchoring credo that allows Yankovic’s to be wholesome while letting its visual lyrics reach extremes—no cussing.

Throughout, Radcliffe's musical performances as “Weird Al” are lip-synced by the real Yankovic, a choice that reminds the viewer of why we’re all here: a storyteller whose work is sincere, very silly, respectful that the audience will get the joke, and comfortably unhinged. The darker corners of Yankovic's style—about macabre delusions, (“Good Old Days”), over-the-top violence (“The Night Santa Went Crazy"), and devastating heartbreak ("You Don't Love Me Anymore”)—are applied to hilarious set-pieces that often go farther than you expect. Fans, new and longtime, who want a more accurate telling of Yankovic’s story will have to dig up the “Behind the Music” episode about Yankovic, (a collection of anecdotes about his nearly subversive sobriety), or read the work of Yankovic scholars like Nathan Rabin and Lily E. Hirsch.

“Weird: The Al Yankovic Story” strictly doesn’t include those above-mentioned pieces of his discography; it mostly only includes the songs that can be found on the greatest hits tape that converted this writer decades ago. But it’s more spiritually in tune with the epic album closers Yankovic has put at the end of his more recent albums, like his Frank Zappa homage “Genius in France.” Like how that nine-minute song (also self-deprecating) bounces between various time signatures and grooves while always being catchy and funny, “Weird: The Al Yankovic Story” lets the level of craftiness quietly speak for itself. Yankovic preserves only a certain kind of “Weird Al,” and yet it carries the values that have made him relevant for so long: that a (great) parody is an act of mastering, and that daring to be stupid is an unorthodox but fruitful path toward brilliance.

Now playing on the Roku Channel. 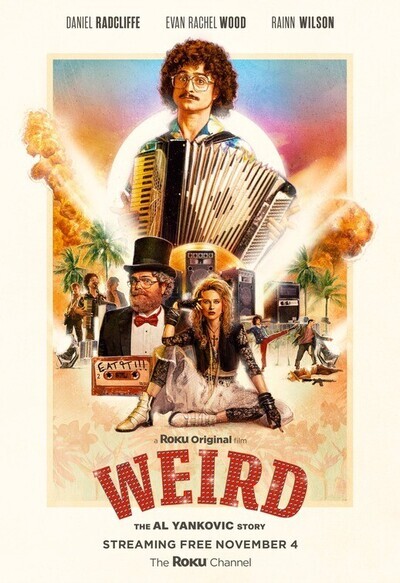 Will Forte as Ben Scotti