Julia (Maika Monroe) knows that something is not right. Something is really, really "off" about the guy in the apartment building across the way, always staring at her. But when called upon to express her feelings, Julia falters. She can't find the words to express the sense of threat. She wonders if she's being paranoid. Or maybe it's her insomnia. She's new to Bucharest and doesn't speak the language. In general, she's disoriented and lonely. So maybe she's just not "reading" things correctly. Julia rationalizes away her growing sense of uneasiness and dread, she tries to talk herself out of her own perception, but still, her gut tells her: There is something not right here. I am not making this up. I am not overreacting. I am in danger. She should listen to her gut.

Chloe Okuno's "Watcher," a chilly and elegant thriller, embodies Julia's state of mind in every aspect: the visuals, sound design, production design, color scheme, not to mention Monroe's visceral central performance—all work together to express Julia's point of view, so much so that doubt arises in regards to Julia's reliability as the narrator of her own life. This is a stylized affair, and the care taken with every choice—the apartment interior, the furnishings, the color of the curtains, Julia's red sweater and red tights, etc.—is meticulous. The film crackles with icy dread. Silences are loud and sounds are even louder. Nothing has the right proportion. Ceilings are too high, stairways too long. Voices emerge as if from the bottom of a well. Spaces are empty that should be full and vice versa. The mundane is terrifying, and the terrifying seduces. Nothing feels right. This is highly subjective filmmaking. "Watcher" is Okuno's first feature, as well as a first feature for the cinematographer, Benjamin Kirk Nielsen, and the two together make a powerful team.

Julia and her husband Francis (Karl Glusman) have moved to Bucharest. He is half-Romanian, speaks the language, and works long hours, leaving Julia—transplanted, adrift—to her own devices. Trouble starts immediately in the cab ride from the airport to their new apartment. Francis and the taxi driver chat in Romanian. Julia doesn't understand a word being said. She is disoriented, especially when the two men appear to be talking about her. Okuno does not use subtitles, and this makes Julia's frustrations our own. She hovers on the sidelines, asking Francis, "What did he say? What did she say?" As the two enter their new apartment building, she glances up at the building across the way, and sees something eerie. In a wall of darkened windows, there's one that's dimly lit, and a man (Burn Gorman) stands there, staring down at them. It's probably nothing.

But every time she looks out her window, he's there. Thus begins Julia's emotional disintegration, beautifully tracked by Monroe, each scene building on what came before, until she is nearly unrecognizable from the woman we met at the start of the film. Julia starts to see the "watcher" out and about. He's sitting behind her at a matinee of Stanley Donen's "Charade" (or is he? It's hard to tell), Later, she sees him again at the grocery store. Julia is now legitimately spooked. Francis is somewhat supportive of his wife—or he tries to be—but he is also baffled at the turmoil his wife has descended into. There's a distinct sense from him that she's making a huge deal out of nothing.

"Watcher" is about the confusion between the voyeur and the voyeur's "object." When he looks at her, she looks back. She is as aware of him as he is of her. She's a "watcher" too. The boundaries blur. He infiltrates her every waking moment. But the terrifying thing is that no crime has been committed. It's not a crime to stand at your window and stare out at the opposite building. Such behavior is part of city life, as is people-watching. Much of this is well-trod ground (particularly Hitchcockian ground), and the references to "Rear Window," both visually and thematically, are everywhere. But the film's acute psychological portrait of a scared lost woman, sleepless and possibly hallucinating, condescended to (lovingly, even worse) by the man who's supposed to have her back, is most reminiscent of "Rosemary's Baby," and the film's careful attention to interiors—doors left ajar, blind corners, vast uncrossable spaces, cramped elevators—is Polanski territory. Another Polanski film, "Repulsion," provides poignant reference points. Julia, wandering through the cavernous apartment, pinned to the spot by the watcher across the way, loses all sense of time, of her own self and its contours, just like Catherine Deneuve does in "Repulsion."

Julia the character is thinly drawn. This serves the genre (she's a projector screen for free-floating audience anxieties), but also makes her seem a bit of a cipher. Julia was an actress, and she gave it up to come to Romania with her husband. Does she have resentment about this? Was she in movies or theatre? Was she just "aspiring"? What's her plan now? Monroe's performance makes you forget the gaps in the character. She is simple and direct in her approach, and we watch as terror co-opts her life. Fear is not an emotion so much as it is an attack on the entire self. All systems shut down. Monroe embodies this.

While there are numerous "confrontations" in "Watcher," the terror here is mostly from the threat of what might happen. There's nothing scarier than that. The mind can imagine anything.

Now playing in theaters and available on digital platforms on June 21st. 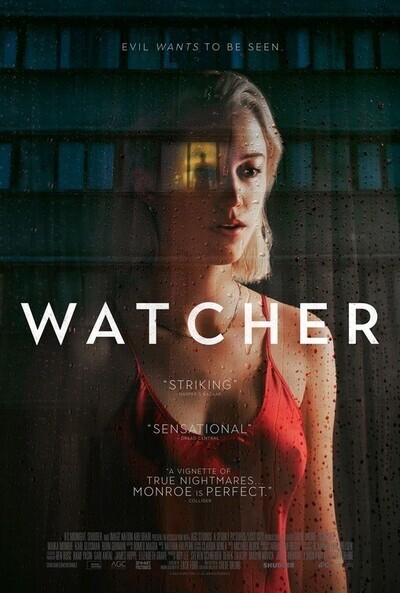 Rated R for some blood violence, language, and some sexual material/nudity.

Burn Gorman as The Watcher