Attention all God-fearing victims of domestic abuse—have the Kendrick brothers got a film for you. They’re the moviemaking duo (Alex Kendrick directs and co-wrote this film with brother Stephen) whose Christian-themed pictures “Fireproof” and “Courageous” made a splash with church-going audiences long before last year’s swath of faith-based indies were put into production. Now the Kendricks have returned, raking up surprising sums at the box office with their latest wide release, “War Room.” It may not be as brazenly offensive as “God’s Not Dead” or as spectacularly inept as “Kirk Cameron’s Saving Christmas,” but it’s still awful, offering all the forced humor and superficial substance of a half-baked homily.

Spirituality can be a beautiful thing to explore in cinema, but “War Room” has no interest in engaging its audience on a personal level. It has one single goal, which according to the Kendricks, is the only goal worth having. The film wants to evangelize by preaching an ideology that requires its followers to view the world in black-and-white terms. Grappling with the gray areas in life is seen as a sign of weakness, while acting in one’s own best interest is nothing more than a sinful exercise in selfish pride.

This is the lesson that real estate agent Elizabeth (Priscilla C. Shirer) must be taught in extended conversations with her client-turned-friend, Miss Clara (Karen Abercrombie). When Elizabeth tries opening up about the unabashed cruelty she endures on a daily basis from her loathsome husband, Tony (T.C. Stallings), Clara refuses to listen. Instead, she urges the long-suffering wife to go back home, empty out a closet and plaster the walls with Bible verses. There, she will summon God to help fight her battles, thus transforming the space into the titular “war room.” Her role as a submissive woman is to treat the man in her life with grace, which will eventually shame him into becoming a good person. God forbid she even considers a divorce.

The film’s centerpiece sequence occurs early on, as Elizabeth sits weeping in her closet while pleading, “God, help him love me again.” This moment is heartbreaking for all the wrong reasons. Since the Kendricks have mistaken one-dimensional caricatures for people who exist in the real world, they forgot to provide Tony with any redeeming qualities that would make us want to root for his marriage. As for the film’s advice to women who are beaten by their husbands, one of Elizabeth’s co-workers advises, “Learn to duck so God can hit him.”

The multitude of problems in their marriage can be boiled down to one cause: Satan. Once the evildoer is cast out of the house in a stirring, borderline psychotic monologue delivered by Elizabeth, everything changes. God promptly interrupts Tony’s dinner with a potential mistress by giving him a stomach ache, and sends him back into his wife’s arms. Before you know it, he’s lost his well-paying job and is facing potential jail time for dirty double-dealing, but Elizabeth remains utterly unfazed. When he asks how she could possibly forgive him for his endless list of transgressions, her answer is unsettling. She insists that she’s staying in the relationship because she loves Jesus, and that it is her godly duty to forever be at his side.

You’d think this would be the end of the story, yet the Kendricks have a whole other hour to fill. So, they throw in more inspirational monologues and more contrived signs of God’s grace, all strung together in an interminable epilogue bereft of tangible conflict. In a film of otherwise bland performances, Abercrombie is the obvious stand-out, if only because of her tireless energy, yet she overdoes the old biddy routine to such an insufferable degree, there are times she resembles an unseemly hybrid of Steve Urkel and Yoda.

If there is a link between “War Room” and last year’s evangelical hit, “God’s Not Dead,” it can be found in their shared hypocrisy. “God’s Not Dead” was a call for tolerance that defended the intolerance of anti-gay Christians. “War Room” preaches that we have no call to be righteous and judge others, yet the film itself is righteous and judgmental in the extreme. If these films truly want to evangelize, then they must step outside their comfort zone—out of the closet, so to speak. They must acknowledge that life is far more complicated than the typical Sunday sermon would indicate, and that faith means more than submitting to a controlled existence ruled by fear. They must portray the full dimensionality of the material world before they can begin to explore the spiritual one. 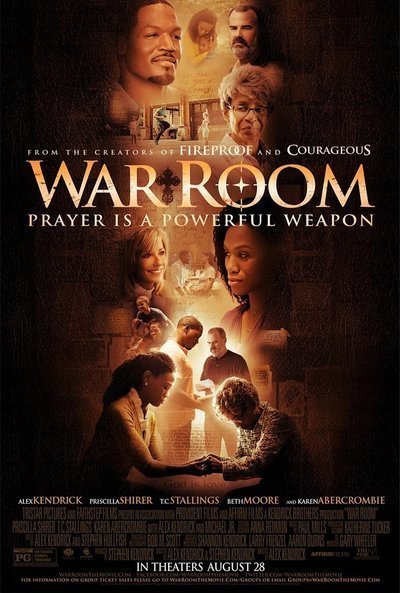