You know how watching a bad action movie can sometimes feel like watching somebody else playing a video game? Watching George Gallo's “Vanquish,” on the other hand, is more like watching someone beta testing an exceptionally buggy game for a system that's soon to be phased out. This is a rehash of genre cliches that is so dull, threadbare, and bereft of thrills that the one time that its one moment of genuine excitement comes when our heroine enters a bar where danger is allegedly afoot, and the television in the background is showing curling. This, I hasten to add, is not a cheap shot at that beloved sport in the slightest—by the time our heroine is leaving the place with guns drawn, my guess is many viewers will be thinking “You go ahead—I’m good.”

The aforementioned heroine is Victoria (Ruby Rose) and as she enters the picture, she's arriving at her job providing evening care for Damon (Morgan Freeman—yes, Morgan Freeman), a retired and wheelchair-bound cop in his palatial estate with her adorable moppet daughter Lily (Juju Journey Brener) in tow. Lily, it turns out, is ill and Victoria confesses to Damon that she cannot possibly afford the necessary treatment. Damon magnanimously offers to pay for the treatment but he will require a service. As his digs probably suggest, Damon was a corrupt cop engaged in all sorts of illicit deals around town. And in the wake of a recent double cross, he decides to pull his money from five associates around town and asks Victoria to put her own former skill set—she once worked with her late brother as a drug courier for the Russian mob—to use by making the pickups over the course of that night. At first, Victoria refuses—she has left that life behind and such—but when it turns out that Lily has vanished, and Damon won’t return her until the job is done, she reluctantly agrees.

Any hopes that this will just be a quiet and nondescript series of pickups and drop-offs pretty much goes out the window when Victoria arrives at the first destination, recognizes the criminal she is collecting from as being the guy who killed her brother, and slaughters him and a roomful of his minions. (She also helps a sex worker escape, so I guess the karmic scales are even.) From there, things go downhill as each new trip brings an encounter with allegedly colorful criminals (including one who clearly thinks he's playing Alfred Molina in “Boogie Nights” and greets Victoria with the deathless line “I hear you killed more people than Quentin Tarantino. Mint julep?”) that ends in either a fight scene, gunplay, or a chase before heading back to Damon’s place for yet another enigmatic conversation (while never just going from room to room in search of her daughter). Meanwhile, Victoria's activities capture the attention of an array of crooked cops, feds, and government agents—at least one of whom actually gets to say that a piece of information is “above your pay grade”—who all try to stop her in equally ineffectual ways.

As you may have surmised by this point, "Vanquish" is a very bad movie. But more than that, it's a supremely lazy one—the kind that almost makes the DTV drivel that Steven Seagal has been churning out for the last couple of decades seem focused and committed by comparison. To describe the characters and the narrative as being “paper-thin” would be an insult to your average ream of copier feed and at least that is guaranteed to have a higher brightness rating than the murky cinematography on display throughout. Of course, one does not watch a film like “Vanquish” for those particular qualities, but they actually come off better when compared to the dreadful action beats that are listless as can be throughout. The only thing that's interesting about them—and the whole movie, by extension—is that the film is oddly bereft of extras throughout. Strip clubs, freeways—you name a location and it is weirdly devoid of anybody other than the specific characters necessary to move that particular scene along. Hell, “Swimming to Cambodia” had more extras than can be found here—not to mention better fight choreography.

Although “Vanquish” is otherwise as forgettable as can be—that may be the closest thing that it has to a virtue—there's still one thing about it that I cannot immediately shake, and that is the presence of Morgan Freeman in a role that requires so little effort it's a wonder that Bruce Willis didn’t take it. Throughout his career, Freeman has, to put it charitably, made his share of bad movies—some perhaps even worse than this one (as those who made it through the likes of “Dreamcatcher” and “The Bucket List” can attest)—but I cannot for the life of me understand what could have compelled him to sign on for this one. Aside from a couple of face-to-face scenes with Rose and one bit where he tucks little Lily in for the night, his role consists almost entirely of sitting in his wheelchair and watching the action unfold on his computer screen via the body cameras that Victoria is wearing. In what is either the high or low point of the film, he observes her dropping a hand grenade in order to get away from the bad guys surrounding her, and as everyone scatters, he starts imploring to her to “Get out of there!” I have no idea if Freeman ever plans to publish his memoirs but if he does, I dearly hope that he shares exactly what was going through his mind when he shot that particular moment because I, for one, am desperately curious to find out. Who knows—maybe he was focusing on the curling as well.

Now playing in theaters, and available on Apple TV+ on April 20. 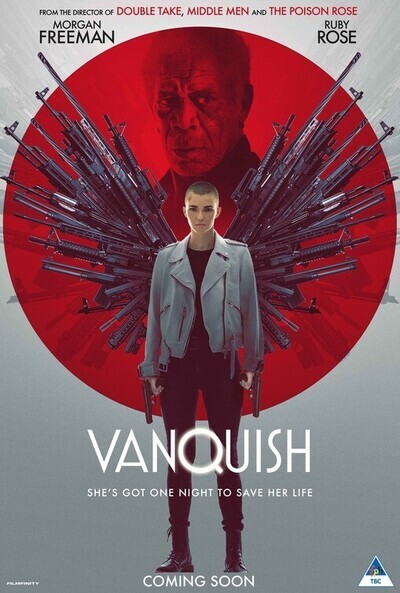