Vampires vs. the Bronx

To paraphrase the famous suckhead slayer Blade, “Some horror movies are always trying to ice-skate uphill.” You could never accuse “Vampires vs. the Bronx” of such ambition when it comes to its own take on suckheads, but director Oz Rodriguez’s horror-comedy is so peppy, and so collectively charismatic, that you probably won’t care. That the movie doesn’t overthink its plot synopsis of a title is part of its charm, along with the laugh-out-loud performances from the adults who aren’t shocked when gentrification haunts their corner of New York.

The first person who becomes aware of the vampires is Miguel (Jaden Michael) who watches in a parking garage as a vampire kills a big neighborhood guy named Slim. That’s just another stress on Miguel, also known as Lil’ Mayor, who has been trying to get the word out about a block party that will help save a local bodega owned by Tony (Joel “The Kid Mero”). On top of that, Miguel can’t even get a smooth word in with the older-aged girls who hang out by the bodega, because his mom keeps yelling out the window and emasculating him. In the background of this late summer saga, one that pops like the last batch of fireworks before fall kicks in, residents are disappearing, businesses are being bought, and white people are moving in.

Miguel gets some help from his two friends, Gregory Diaz IV's vampire-savvy Luis (introduced reading Salem's Lot and referred to as “the Puerto Rican Harry Potter”) and Bobby (Gerald W. Jones III), who has been targeted by local gang-leader Henny (Jeremie Harris) to join his crew. But when Miguel tries to get the adults to care about what’s going on, he hits a dead end. They don’t believe in vampires, or see the gentrification as some unspeakable horror. “Things change; the neighborhood changes. It’s our turn. It’s just what happens,” says his mother Carmen (Judy Marte), in a moment that gets to the movie's heart before it goes back to its lighter impulses. In a clever generational gap, the adults know what's up, but they only see real estate deals, or confusing new businesses. One of the movie’s many funny lines comes from Vladimir Caamaño, who sits dumbfounded with his buddy Andre (Chris Redd) in front of a “Coming Soon” sign for a business called Bone and Thread. “I know, right? Is it a clothing store or a restaurant?”

Coming from a long comedy background that includes plenty of great “Saturday Night Live” segments (like the Kanye West/“A Quiet Place” parody in 2018), director Rodriguez is especially good at getting such great line delivery from the supporting adults, who all but steal the show from the younger kids and their frantic adventure. Mero is especially funny as the bodega owner who gives the boys a type of home, and then tries to appease his new clientele by selling different types of kale and something called Milked Oats. And then there’s Cliff “Method Man” Smith, who plays a priest with a short temper for Miguel and Luis. As with Mero, or Redd, or Heather Alicia Simms, who plays Bobby’s mom Gladys, they're all such good casting choices that you’ll wish the movie had more room for them, but you respect that the script would rather be punchy than draw anything out. Still, it’s a reminder that more movies need to go back to showing outtakes in the credits.

In its smooth creation of a horror-comedy tone, “Vampires vs. the Bronx” incorporates a more menacing, parasitic force with the story of Bobby and how Henny's gang wants his soul. To the credit of the tight plotting from Rodriguez and Blaise Hemingway, this subplot is weaved in neatly with the sillier stuff, and Bobby's vulnerability gives the movie a sense of gravity. It then leads to one of the movie’s actually surprising, and emotional moments when Bobby gets a clever way to express his awareness about an evil that can’t be beaten by a balloon filled with holy water.

"Vampires vs. the Bronx" takes gentrification for what it is—a form of white supremacy—and makes it an unmistakable evil, in which the pale monsters try to demoralize the residents by referring to the Bronx as “somewhere where no one cares when people disappear.” But instead of this inspired approach leading to new ideas, the world-building is seemingly built entirely from references: the source of such gentrifying evil is named Murnau Properties (as in "Nosferatu" director F.W. Murnau), their logo is a portrait of Vlad the Impaler, the man who loosely inspired Dracula. The vampires here look like they’ve emerged from the “Underworld” franchise and get bony faces during feeding time like in “Buffy the Vampire Slayer,” and when they are later stabbed by wooden stakes, they turn into ash a la “Blade.” “Vampires vs. the Bronx” doesn’t really add anything to vampire lore so much as use these texts like they were warnings, all so that our young heroes can then arm up on wooden chair legs, crucifixes, and garlic in zippy montages straight out of an Edgar Wright movie. It all makes the film’s moments of action too predictable, and softens the overall impact it could have had it if it made us think more about this horror fixture beyond its unmistakable metaphor.

But even if the unwelcome guests are in too-obvious costumes, Rodriguez keeps the film buzzing like a party, especially when we get to see residents like the live-streaming Gloria (Imani Lewis), or the mature Rita (Coco Jones), who joins the vampire hunters later, armed with knowledge from her Haitian upbringing. Originality is missing from the movie, but it has plenty of great jokes and a whole lot of people you enjoy hanging out with. When a horror-comedy is as agile, charming, and funny as this, everybody wins. 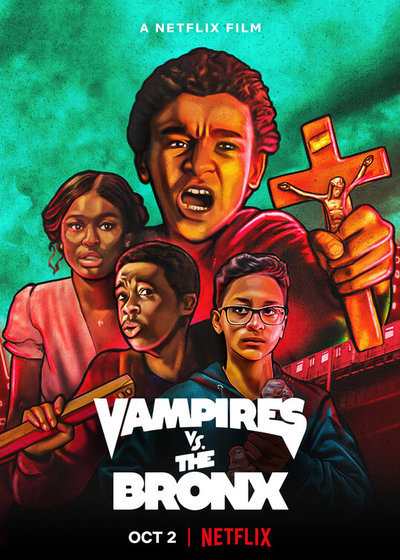