To paraphrase the great Max von Sydow in "Hannah and Her Sisters", if Bela Lugosi came back and saw what was being done in his name, he'd never stop throwing up.

Similarly based on a popular series of young-adult fiction and aimed primarily at impressionable girls in the throes of pubescence, the private high-school fantasy largely distinguishes itself from its predecessor in its tone. Whereas the Twilight films could be unintentionally funny with moments of unabashedly morose melodrama, "Vampire Academy" intends to be funny by having characters utter such cornball phrases as "Queen bee? More like queen b-otch," and "Sweet sassy molassy!" Oh, the hilarity when someone is described as being "a few corpuscles shy of an artery." Then there are the toothless vampire puns: "The stakes are high—get it?"

The script even prides itself on daring to reference Twilight directly while distinguishing its brand of vampires from that franchise with a remark that would have been a bit of a giggle maybe, oh, five years ago: "They don't sparkle, either."

While not all the enrolled pretty male and female creatures swanning about this fussily old-fashioned Hogwarts-like institution shun the sun, apparently they are afraid of other kinds of exposure since "Vampire Academy" had no prior screenings for reviewers before opening on Friday. Wise move, since there is no UV protection high enough to extend to critical scorching.

There is, however, a torturous mass of mythology to plow through before a plot actually materializes, such as the types of magic the students perform (the band Earth, Wind & Fire seems to be an inspiration) and how they get their required doses of hemoglobin (basically, a cafeteria that is run like a upscale Red Cross blood drive).

But all you really need to know is that there are three levels of supernatural beings: The Moroi vampires who safely co-mingle with humans; the half-mortal, half-vampire Dhampir who act as bodyguards for the Moroi; and the vicious Strigoi, a deadly strain of zombie-like vampires who are outcasts and don't play well with others. For some reason, they are all based in Montana. I guess it is because Twilight has the rights to Washington.

The character who serves as our chatty little guide to the world of St. Vladimir's Academy—and has clearly confused spewing exposition with the art of conversation—is raven-haired Dhampir guardian Rose (Disney TV alum Zoey Deutch, daughter of "Back to the Future"'s Lea Thompson, whose relentless snarky intonations reek of Ellen Page in "Juno"). She is dedicated to protecting beauteous blonde Moroi princess Lissa (Lucy Fry) and occasionally offers up her neck for handy sustenance, an event that forces her face to exhibit porn-y ecstasy.

The two are connected telepathically, a process that causes Rose's eyes to change to amber and her posture to significantly improve as she monitors Lissa's run-ins with panting boys, schoolyard bullies, jealous rivals and threats in the form of bloody graffiti.

Seems as if someone has it in for the lass. But what's a couple dead animals dangling in the doorway and showing up in a backpack when there is the Equinox dance looming and party dresses are crying out to be bought at the mall.

A few veteran actors have deigned to be involved in this bloody mess. Gabriel Byrne, looking like he has awoken from a month-long binge while sucking blood from an IV as if it were a hookah, is an elder Moroi royal. We are to believe he is the father of a geeky girl with Shirley Temple hair and Harry Potter glasses who turns out to be Haley Dunphy from "Modern Family". Sorry, Sarah Hyland, this disguise won't save you when you try out for your next movie job. Joely Richardson shows up as an imperious monarch who scolds the students in a vague Euro accent and seems to be under the delusion that she is Queen Elizabeth I, judging from the Renaissance circus tent that serves as her attire.

I am all for female-driven action movies meant for teens and tweens, and Rose, with her "Buffy the Vampire Slayer"-style ninja moves, could have been a goth-chick answer to "The Hunger Games"' Katniss if she weren't such a one-note annoyance. What is more depressing is that the filmmakers responsible know better: Mark Waters, who directed "Freaky Friday" and "Mean Girls", and screenwriting brother Daniel, who wrote "Heathers".

Adding insult to an already injurious affair is a cover version of Bauhaus' ghoulish classic "Bela Lugosi's Dead", done instead with chirpy vocals. It's like a stake to the ear. 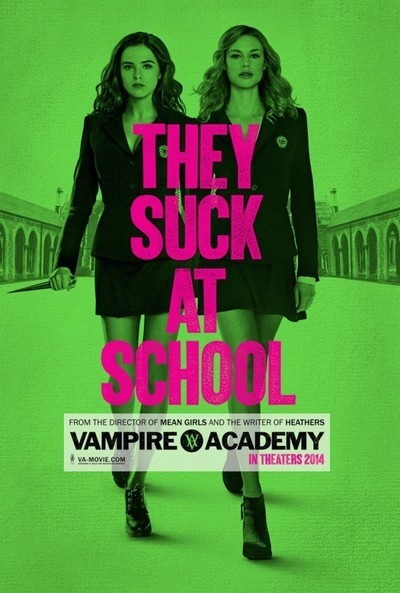