“Valley Girl,” the remake of the 1983 teen movie favorite, was originally scheduled to be released just about two years ago until it was put on the shelf following certain scandals—you can look up the particulars for yourself—involving one of its co-stars, YouTube personality Logan Paul. It might well have languished there indefinitely but with the entire film release schedule thrown into upheaval, it has been pulled off the shelf and released at last. If nothing else, its reemergence should at least help Logan Paul’s cause for future career rehabilitation. As loathsome as his behavior may have been, it only takes watching a few minutes of this painfully misguided film to realize that he was most likely not the only reason why no one was exactly rushing to dust "Valley Girl" off until now.

The original was essentially a modern-day variation on “Romeo & Juliet” that depicted the star-crossed romance that unexpectedly developed between pretty and popular San Fernando Valley preppie Julie (Deborah Foreman) and Hollywood punker Randy (Nicolas Cage), much to the consternation of their respective bands of friends. Although designed to be a youth exploitation film loosely inspired by Frank Zappa’s satiric cult hit song of the same name (though it had no other connection), it ended up being funnier, sweeter, and smarter than anyone going into it might have rightfully expected. Armed with an unexpectedly intelligent screenplay, sensitive direction from Martha Coolidge, a killer soundtrack, and a strong cast that featured both Cage in the first of what would prove to be a long line of offbeat performances and a supporting turn from Michelle Meyrink, the film was a surprise critical and commercial hit when it came out. Over time, it would go on to develop a considerable cult following.

In creating this remake, screenwriter Amy Talkington and director Rachel Lee Goldenberg have stuck to the basic contours of the original. Set vaguely in 1983 (if one goes by references to “Return of the Jedi” and Sally Ride that pop up), the film stars Jessica Rothe as Julie, a teen queen with a loyal squad of girlfriends—Karen (Chloe Bennet), Stacey (Jessie Ennis) and Loryn (Ashleigh Murray)—and the hunkiest guy in school, vain BMOC Mickey (Logan Paul) as her boyfriend. And yet, despite seemingly having it all, Julie quietly yearns for something else and it finally arrives in the form of Randy (Josh Whitehouse), a punk from the city looking for musical success with his bandmates (Mae Whitman and Mario Revolori). After meeting-cute at the beach, Randy and his pals crash a party Julie is attending and he whisks her away for the night. This transgression, coupled by Julie’s decision to finally break up with the loutish Mickey, makes her a pariah among her former friends and Randy’s pals worry about the effect she is having on him. Even if you never saw the original, I am about 85% sure that you can fill in the rest of the blanks and if I told you that the finale was set on prom night, that would probably go up to about 98%.

There are two key additions to the narrative this time around, both fairly disastrous. The minor one is the decision to employ a contemporary framing device that finds a now-older Julie (Alicia Silverstone) recounting her story to her own daughter. The bigger one is the decision to transform the story into a jukebox musical in which all of the characters sing and dance to a number of hits from the era, including “We Got the Beat,” “Bad Reputation,” “Kids in America,” “Crazy for You,” “Take on Me” and the standout tune from the original film, “I Melt With You.” This might have worked if the concept had been worked out in some organic manner but all of the songs just seem shoehorned in on the flimsiest of pretexts—at one point, Julie remarks that it is the '80s and girls can do anything they want, leading to everyone breaking out into “Girls Just Wanna Have Fun”—and leave the whole thing feeling like a pop spin-off of “Rock of Ages.” (This, I hasten to add, is not meant to be a compliment.)

Although some of the shakier elements from the original (especially that aforementioned stepmother/daughter rivalry) have been dropped, a lot of the stuff that made it shine has also been mysteriously left out. For example, Julie’s parents in the original (Frederic Forrest and Colleen Camp) were a pair of ex-hippies who ran a health food joint and the film had a real affection for them and their relationship with their daughter. (One of the biggest laughs came from the moment when it dawned on her father that he had a kid old enough to attend prom.) Here, Mom and Dad (Judy Greer and Rob Huebel) are just a couple of vapid Yuppies indistinguishable from other dopey parents found in such films and exist mostly to work more weak jokes about the era into the proceedings—Dad talks about how sleek his bulky camcorder is and insists on investing money in Commodore instead of Macintosh. All of the characters have been reduced to the very clichés that the other film avoided, and none of the actors are able to make anything of them.

The best thing about “Valley Girl” is Jessica Rothe, who you may remember from her striking work in the “Happy Death Day” films. Here, even though this one never works for a moment, she amply demonstrates that if anyone out there has a good romantic comedy-musical project in the works, she would be absolutely ideal for it. Besides, it is nice to be able to see her in a project where she doesn’t drop dead in nearly every other scene—too bad that the movie as a whole ends up doing just that on its own. 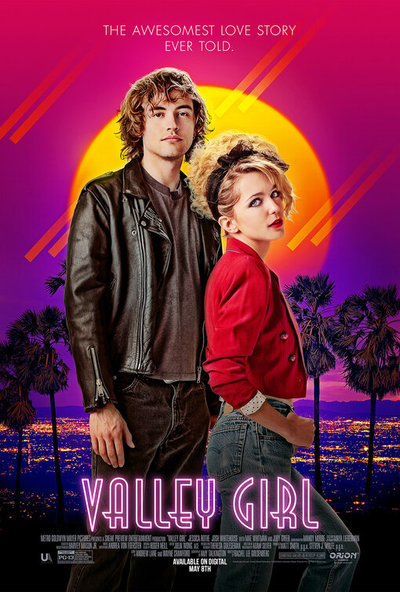