Joan Jett deserves a great rock doc. This isn't it.

I was lucky enough to see Jett earlier this year in a small venue in Austin, and she still absolutely kicks ass, continuing to demolish gender bias in rock and roll. Even today, culture often tries to tell us that rock is a male genre, but Jett’s career has defied all of those stereotypes and inspired both men and women to look at what’s possible in the world of music in a new way. And she's still doing it. Clearly, “Bad Reputation,” the new doc about her career—and not really her life as we barely see any of that—is something that should work for me, but what people don’t understand about hagiography sometimes is that it’s even less satisfying for the subject’s biggest fans. I want a rock doc that offers greater insight into the struggles Jett faced, how The Runaways and The Blackhearts changed music, and why so many people still love Joan today. “Bad Reputation” ain’t that movie.

Sure, director Kevin Kerslake ticks all the boxes. Jett herself clearly played a major role in the production—probably too major a role but I’ll get to that later—essentially narrating her life story. There are archival performances that span her entire career, and a notable number of “famous fans” of Jett, including Iggy Pop, Debbie Harry, and Billie Joe Armstrong of Green Day. There's footage of Jett’s early days, clips of all of her hits, and a bit of a catch-up on where she is now. Tick, tick, tick. Late in “Bad Reputation,” Kristen Stewart, who plays Joan Jett in “The Runaways” comments on how Jett defies the expectation that a rock star should be a bit “messy” or unfocused and talks about Jett's surprisingly no-nonsense determination. Perhaps Kerslake is trying to reflect that aspect of Jett’s personality in his structure and approach—wasting no time and hitting every note as expected—but it makes for a deeply dissatisfying piece of filmmaking.

The truth is that “Bad Reputation” is not a documentary of interviews or insights as much as it is soundbites. What’s the difference? The former has depth, the latter does not. It is a hyperactively edited episode of “Behind the Music” that doesn’t spend any significant time in any chapter of her life. And, worst of all, every conflict and drama—her drinking, failed records after the hit ones—is either someone else’s fault and/or skimmed over in seconds. There is SO much talent on display here offering little more insight than “Joan Jett Rocks.” OK, I agree. But this is a 93-minute movie that needs more than that.

“Bad Reputation” improves about an hour in when it gets out of its Runaways/Blackhearts adoration and starts filling in details about Jett’s last two decades that people may not know. It interestingly draws the line between Jett and the Riot Grrrl movement, particularly in interviews with Kathleen Hanna of Bikini Kill, who Jett supported and worked with early in her career. There are anecdotes from the later part of her career—such as when Jett recorded a song by The Gits after the murder of their lead singer or how she toured in support of the troops after 9/11—that are way more interesting than the earlier material. There’s passion and insight in this section of the film that makes that first “Joan is Awesome” hour feel even more superficial.

Worst of all, Joan’s interview footage sounds incredibly scripted. I think there’s truth in a lot of what she says, and she means well, but it’s been so prepared and edited regarding what she’s willing to say and reveal and what she’s not that it offers almost nothing. She often reveals more about herself here in archival footage than in the new interview clips. Maybe Joan Jett’s music said all she needed to say. “Bad Reputation” really only gets at the core of its subject when she’s doing what she loves. 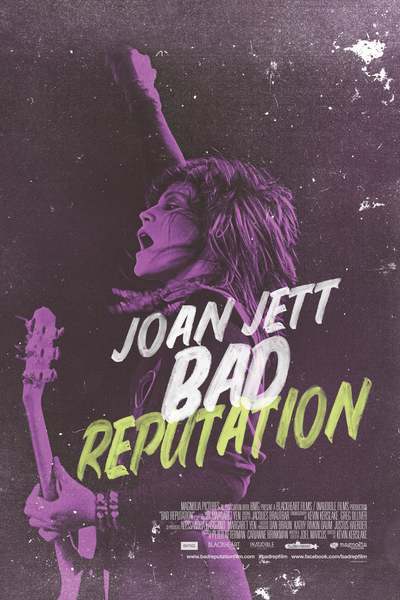