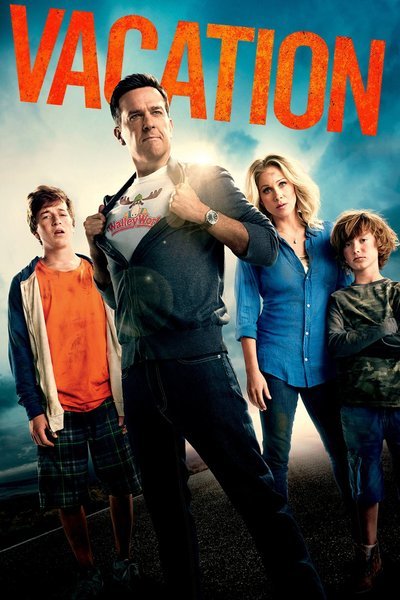 Rated R for crude and sexual content and language throughout, and brief graphic nudity3

Last week, as I was walking out of a screening of “Vacation,” a fellow critic, engaged in passionate argument with some other colleagues, pointed at me and said, “You! I heard YOU laughing.” And I said, well, yes, I was laughing, at some particular parts.

My poor friend was searching, perhaps desperately at this point, for someone who shared his “c’mon, it wasn’t THAT bad” opinion of the film. And I happen to have, for better or worse, a laugh that’s hard to miss. But I couldn’t go that far with him about this necessarily self-conscious sequel—or is it a reboot?—to the famed “National Lampoon” films of the same name/theme. No way, no how. Because “Vacation” is, minute to minute, one of the most repellent, mean-spirited gross-out comedies it’s ever been my squirmy displeasure to sit through. This relentless farce of humiliation asks us to guffaw at a gruesome highway death, another presumed death by blunt-force trauma and/or drowning and/or (spoiler alert for those who sit through end credits?) bear attack. It locates humor in the sight of a young boy using a used hypodermic needle as a dart launched against his brother, and, at the very end, that brother unearthing his ostensible virility by beating on a snooty teenage girl.

I could go on, and on, and on. But if you’ve seen the trailers, which feature the highway death gag, and the hypo gag, and the set up to the hypo gag (which is that the clueless Griswold family, thinking they’ve discovered a secret, mineral-rich “hot spring,” are revealed to be swimming in a pool of raw sewage and more) you get the tone of the film, which is similar to that of the very popular, and largely vile and hypocritical “Hangover” movies. “Vacation,” like those films, features the affably goofy Ed Helms in a lead role.

Here Helms plays a grown-up Rusty Griswold (the teen son character initially played by Anthony Michael Hall in the 1983 “National Lampoon’s Vacation;” the most famous subsequent Rusty is, I’d say, Johnny Galecki, who played the role in 1989’s “National Lampoon's Christmas Vacation”). Rusty is a pilot for an airline called “Econo-Air,” and in the opening scene, he’s given his hapless nice-guy props by an aged colleague who’s clearly suffering from dementia, and who nearly crashes the plane when Rusty leaves the cockpit for a bathroom break. You remember what I was saying before about the jokes in this movie. After a slick playboy pilot for a more elite carrier (Ron Livingston) obliges Rusty to eat dirt on a shuttle line, Rusty gets home to find discontent in the domestic hearth. His younger son, Kevin (Steele Stebbins) has been tormenting older brother James (Skylar Grisondo), per his usual routine, we are led to believe by beleaguered mom Debbie (Christina Applegate). This time, it’s by magic-markering “James Has A Vagina” on his guitar. You remember what I was saying…

Anyway. I might as well fess up here that the most laughs I got from the movie were via Steele Stebbins as the older-brother-tormenting Kevin. The character as written is typically nasty and foul-mouthed, and it’s pretty clear that directors and co-writers Jonathan Goldstein and John Francis Daley (who also wrote “Horrible Bosses,” so, um, yeah) weren’t expecting to get more out of the character than the usual cheap “hey, check out this little kid cursing a blue streak” laughs. But Stebbins—and perhaps I should be more disturbed than amused by this—invests the character with a relentless bad-seed malevolence, a gleeful aura of irredeemability, that’s so mortifying it’s actually often quite funny.

As for the rest of the cast, well, I used to think that Helms, whose upending of Middle American blandness on “The Daily Show” was always reliably droll, did those dreadful “Hangover” films because they paid well; now I wonder that he actually believes these movies are good, and the question unsettles me. But that’s life. Christina Applegate, whose work on “Married With Children” gave her valuable experience in playing characters whose dignity, such as it might be, is regularly affronted, shows similar game good spirits in her activities here. Chris Hemsworth, playing Rusty’s brother-in-law, assays an exaggerated Southern accent and strides around with an oversize prosthetic penis, which, again, you probably know from the trailer As the Griswolds drive erratically across the country (the movie doubles down on the imaginary-car-from-hell device of the 1983 original) “Vacation” shows a peculiar perspective on the American character. This Made-In-USA clan suffers abasement after abasement, literally swimming in feces at one point, but still soldiers on in pursuit of a cherished goal—a sojourn to Walley World. And even there, degradation awaits. And these dumb, wan, mediocre, sad-sack Americans are too stupid to even understand what’s happening to them, yet too plucky to back down. Perpetual stooges.