There’s trash, and then there’s good trash. “Unforgettable” falls into the latter category. Slick, glossy and radiating juicy villainy, it knows exactly what kind of movie it is and goes for it with giddy abandon.

The story of two beautiful women embroiled in a battle over the same blandly handsome man, it’s not a complete parody of the hair-pulling sexual thriller that was a staple of guilty-pleasure cinema in the late ‘80s and early ‘90s and had a revival with 2009’s “Obsessed.” But veteran producer Denise Di Novi (“Heathers,” “The Sisterhood of the Traveling Pants” “Crazy, Stupid, Love”), directing for the first time, takes this premise right to the border of knowing camp and delights in letting it simmer there.

I’m not saying it’s good. But I’ll admit that I had a good time.

And a good deal of that has to do with the performance from Katherine Heigl as a scorned divorcee out for revenge against her ex-husband’s new love. With her statuesque frame, platinum mane and icy stares, Heigl dominates her every scene in ways that are hilarious, frightening and hilariously frightening. Finally, this is the perfect use of her commanding on-screen presence; playing rom-com heroines in movies like “27 Dresses,” “The Ugly Truth” and “Life As We Know It” always seemed like a poor fit.

But it’s hard to ignore the fact that the depiction of both Heigl’s character, Tessa, and Rosario Dawson’s Julia seems uncomfortably outdated. “Unforgettable” portrays these women as vicious rivals, both seeking the love and approval of a rich hunk to make them feel validated, complete. But the script from Christina Hodson finds room to explore the origins of their insecurities as well as their feminine strength. And the depiction of perfect, judgmental mommies in a predominately white, wealthy, Pasadena-like town in Southern California isn’t too far off.

Mostly, though, “Unforgettable” is just nutty. This much is clear early on, when Julia cuts into her going-away cake as she prepares to leave the San Francisco online publishing company where she works. Di Novi takes the time to linger on the giant blade as it slices into the letter “L” in her name. We already know that a murder has taken place: Julia’s ex-boyfriend, whose abuse drove her to seek a restraining order and a new life, is now dead. But while the actual whodunit isn’t all that intriguing, the performances and the production values elevate this familiar, tawdry material.

Julia wants to leave her troubles behind and start over with her fiancé, David (Geoff Stults), whose chief desirable attribute seems to be that he’s even-tempered. There’s not much to him. But if he’s a Ken doll, his ex, Tessa is “psycho Barbie,” as one character describes her. This is the kind of movie in which people are constantly explaining themselves to each other—and explaining each other to each other. The expository dialogue may be clunky, but the zingers are choice.

Also not terribly subtle is the fact that Tessa and Julia are complete opposites, although the wardrobe selections from costume designer Marian Toy make that clear in inspired ways. Tessa is all stick-straight hair and monochromatic, form-fitting sheaths. She’s an equestrian, and she rides her horse with intense purpose. Julia, meanwhile, is all flowy, dark curls and boho-chic sundresses. She’s a former smoker with a hearty laugh.

“Unforgettable” never specifically addresses the fact that Julia is the only person of color in this idyllic, small town, but you can feel the implicit racism in the way Tessa and her prickly posse size her up with disdain. Dawson’s earthiness keeps the film from spiraling out of control into soapy territory, and she’s afforded the few, rare instances of genuine emotion here. She may actually be too good.

Anyway, Julia joins David and his sweet, 6-year-old daughter, Lily (Isabella Kai Rice), in the family’s stately, Spanish-style house in the hills. (Veteran cinematographer Caleb Deschanel gives all the interiors a creamy sheen that’s positively Nancy Meyers-worthy.) A former Wall Street financial guru, David is now pursuing his dream of launching a microbrewery; uptight Tessa was never impressed with that plan, but fun-loving Julia is down for whatever.

And it’s that obvious, vibrant connection between the two of them that makes Tessa seethe with jealousy. No bunnies get boiled in “Unforgettable,” but Tessa does engage in some elaborate, high-tech trickery. Her increasingly (and awesomely) ludicrous antics eventually result in the return of Julia’s ex-boyfriend (Simon Kassianides), albeit in rather distasteful fashion. It’s all laughs—for us, at least—until then.

But none of the men here are nearly as interesting as the women. Besides Heigl and Dawson, Cheryl Ladd is just deliciously evil as Tessa’s Botoxed and perfectly coifed mother, who will stop at nothing to ensure her daughter’s happiness. Ladd gets some of the film’s most prime, passive-aggressive lines (“Oh, you didn’t bake the scones?”) but her character’s incessant nitpicking also provides a window into what messed Tessa up so badly. And comedian Whitney Cummings does more with the obligatory, wisecracking-best-friend role than you might expect.

None of it is terribly memorable. But it’s fun while it lasts. 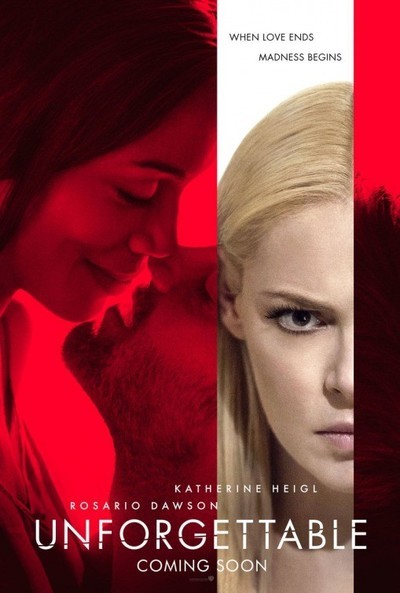 Cheryl Ladd as the Connover's mother