The stakes could not be lower in "Unfinished Business," the second collaboration between director Ken Scott and Vince Vaughn. Watching a film with non-existent stakes is a depressing experience, especially when "Unfinished Business" also wants to tug on your heart-strings. Heart-strings refuse to be tugged sans stakes. The characters are not people, but rough drafts of simplistic character-traits, and the actors (game as they all are) cannot create something out of nothing. Screenwriter Steve Conrad has written some very good films about middle-aged male panic, most memorably "The Weatherman," but in "Unfinished Business", scenes just sit there. Nothing happens.

The opening scene, meant to call up memories of Jerry Maguire storming out of his office taking the brave little secretary with him, is a problem because as one watches it, one starts to wish that one were watching "Jerry Maguire" instead. Dan Trunkman (Vaughn) confronts his boss, the unfeeling and cutthroat Chuck Portnoy (Sienna Miller), about why he has to submit to a 5-percent pay cut. Employees implausibly gather around to watch the argument. When Trunkman storms out, declaring he will set up a business of his own, nobody follows him. Instead, he acquires his first "employees" in the parking lot on the way to his car: Timothy (Tom Wilkinson), fired because he was too old, and Mike Pancake (Dave Franco), who just interviewed for a job and didn't get it, maybe because he has only about 20 words in his vocabulary.

A year then passes, and the three are seen still working out of the product-placement-Dunkin-Donuts as an office, and their relationship has not progressed at all. There's no chemistry between these guys, despite a valiant effort on the part of the actors (especially Vaughn, always open to possibilities in any given scene for comedy/bits/gags). Trunkman is determined to close some important deal, and that journey takes them first to Portland, Maine, and then to Germany (although why all three of them had to travel overseas remains obscure, especially since their "company" has no money in the bank).

Elderly sad-dog Tim is unhappy in his marriage, wants a divorce, and his main desire in life is try the "wheelbarrow position." It's hard to invest in a "stake" such as that one, and the "wheelbarrow position," unfunny at its first mention, is brought up again ... and again ... and again ... in a tone-deaf repetition that almost reaches surreal levels. Trunkman has two unhappy kids at home, one who is being bullied, and one who is a bully, as well as a wife who cannot grasp that her husband is on an international business trip and she shouldn't call him three times a day. Mike Pancake is so naive that he doesn't know the difference between a square and a rectangle.

There's one sequence in "Unfinished Business" that is not given enough room to breathe, but it has a lot of weird possibilities. Because he can't find a hotel room, Trunkman ends up staying in a museum art-installation called AMERICAN BUSINESSMAN 42: an all-white hotel room, with an entire wall of windows, where passersby can look in and watch him as though he is an elephant in a zoo. It's the only moment when "Unfinished Business" feels in any way original.

Other than that, the film limps along, with no sense of comic timing, slapstick reality, or even spontaneity. It's so airless, and yet it feels heavy as lead.

I like Vince Vaughn in his current phase of slightly-chastened grasping-at-straws middle-aged schlubs. It feels honest, the quick-talking quick-witted guy baffled as to why things don't come so easily to him anymore. Vince Vaughn still has the ability to nearly save any moment he is in by his sense of the absurd, his sharp reactions, and his rat-a-tat chatterbox vocabulary. His performance in "Unfinished Business" is weighed down with worry and concern, almost like it's from another movie, and the fact that his character lacks his typical charismatic snake-oil salesman vibe is actually kind of interesting, in spite of all the nothingness surrounding it.

But the nothingness is pervasive. 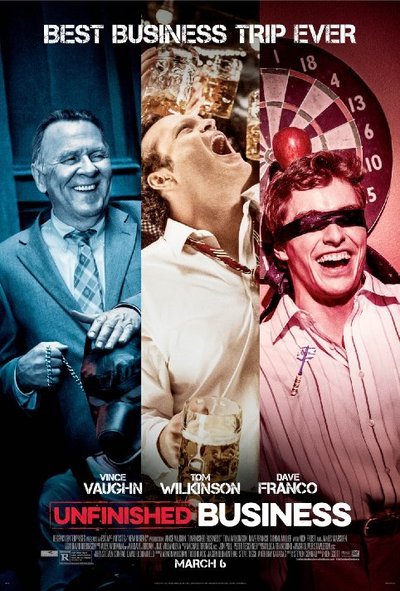 Rated R some strong risqué sexual content/graphic nudity, and for language and drug use