History, mythology, romance, and even architectural theory intertwine in the latest from the German master Christian Petzold, director of “Phoenix” and “Transit,” among others. The writer/director gets the stars of his last film together for a tale that plays off the myth of Undine, a water nymph who becomes human because of the love of a mortal man but will be forced to return to the water if he is unfaithful. Petzold keeps his mystery afloat (sorry) thanks to his impeccable craft even if this is a tale that sometimes feels like it needed a more magical and less direct approach. After all, it’s a whimsy-enhanced rewrite away from a Jean-Pierre Jeunet film and the searing chemistry of the two leads may lead one to wonder what might have resulted under the direction of a less restrained filmmaker. However, there’s still a lot to like here, particularly in the lead performances and a reminder of how Petzold can use such simple techniques and fluid filmmaking (sorry again) to cast a spell.

A man named Johannes (Jacob Matschenz) and a woman named Undine (Paula Beer) sit at a café. He’s met someone else. After wiping a tear from her face, she tells him that he has no choice—he can’t leave her. If he refuses, she’ll have to kill him. This threat is taken surprisingly well—the first sign that things may not be exactly what they seem. She goes off to give a presentation on Urban Development in Berlin, particularly after the fall of the Berlin Wall, which is approaching its 30th anniversary, and tells Johannes that he will be there when she returns. He’s not.

As Undine begins to panic, her eyes fall on an aquarium in the coffee shop just as a young man named Christoph (Franz Rogowski) comes into the room. He saw her presentation and wants to spend time with her. As her eyes focus on the figure of an underwater diver in the aquarium, Christoph’s awkwardness knocks him into the shelf and the glass breaks, sending shards, water, and fish all over the two of them. You won’t see a stranger meet-cute all year. And yet Beer and Rogowski’s chemistry is instantly palpable. As they lie on the floor, they look into each other’s eyes and you believe they are instantly connected. It’s a reminder of how increasingly rare on-screen chemistry is in modern film as these two have something you just don’t see that often anymore.

Of course, they begin a romance. Did I mention that Christoph is an underwater diver? Petzold films some fascinating underwater sequences, starting with Christoph’s encounter with a legendary catfish named Gunther. And then Christoph takes Undine to work with him one day and things get even weirder. “Undine” is a difficult film to recap in that it’s purposefully light on plot, choosing to play with themes and mood more than dialogue. A surprising portion of the movie consists of Undine’s presentations about history and architecture as Petzold tries (and sometimes misses) commentary on how we can change things, replace one building with another, but there are aspects of the human condition that remain the same. The legend of Undine dates back hundreds of years, not unlike some of the buildings still standing in Berlin. We can alter the architecture. We can tear down the wall. But the history and the mythology remain, just under the placid surface of the water. And we can replace one boyfriend with another, but it’s not always that easy.

Knowing that his film could be a little cold, Petzold puts much of the emotional thrust in the eyes and bodies of his stars. He relies heavily on the way Rogowski holds Beer or the way she looks back into his eyes, and the film becomes powerful purely through their connection. When there’s talk of being able to feel a heart literally skipping a beat, it’s believable because of how much Rogowski and Beer bring for their director. Petzold also limits his camera movement, and relies only on Bach for his score.

How Undine’s love life connects to the changing façade of Berlin is largely left for the viewer to consider. While Petzold’s vagueness is admirable, and often one of his strengths, it wouldn’t have hurt “Undine” to connect a few more of its dots within the supernatural aspects or underline a few more of its themes with more emotional thrust. It can feel purposefully vague to a frustrating extent, as if Petzold wants us to concentrate on whatever we can see through the murky water. I enjoyed the swim even if I’m not quite sure the film conveys what’s going on under its surface.

Now playing in select theaters and available on digital and VOD platforms. 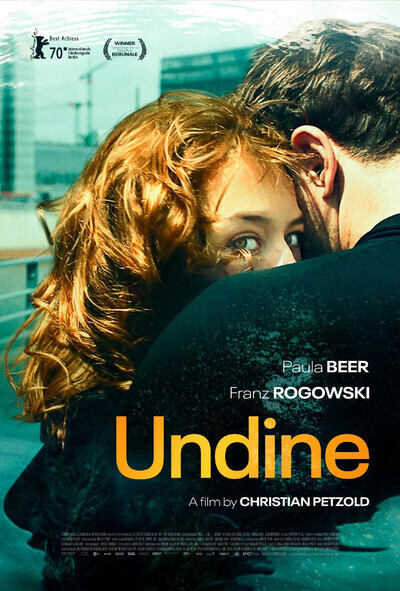