Under the Silver Lake

It’s easy to see why the long-delayed “Under the Silver Lake” has been something of a conundrum for A24, a film distributor that typically knows how to handle projects that may not appeal to a mass audience. They’ve become very successful through supporting ambitious projects from young filmmakers, but I picture them watching “Under the Silver Lake” and having absolutely no idea how to sell it. David Robert Mitchell’s follow-up to “It Follows” is a rambling shaggy dog of a movie, a flick that recalls the sprawling insanity of “Southland Tales” and the stoner vision of “Inherent Vice.” It’s not exactly perfect counter-programming if “Avengers: Endgame” is sold out. And yet there is an audience for this movie. Trust me. This is the kind of film that garners a cult following and will make underrated lists at the end of the year. It’s unlike anything else so far this year, and that alone has value. That it doesn’t quite come together in the second half after a riveting first hour is disappointing, but there’s still too much to like here to discard it as much as A24 seems to be doing.

“It’s fucking ridiculous to assume media has one purpose, right?” Sam (Andrew Garfield) could be talking about how much entertainment seems to be designed purely for escapism and films like “Under the Silver Lake” are striving for something more, but he’s also going on one of his conspiracy-fueled rants about how naïve we all are about pop culture. You know those people who believe there are hidden messages in LPs if you spin them backwards? Sam is one of those guys. And that’s really his most defining characteristic. It’s arguable that he starts to see patterns in the world around him because his life is so flat otherwise. He’s jobless, affable, and the kind of guy who will talk your ear off about the latest conspiracy he’s uncovered.

Sam’s world is turned upside down when he meets the gorgeous Sarah (Riley Keough), a new neighbor in his L.A. apartment complex. They flirt, chat, and wonder about the latest headline-grabbing story of a dog serial killer—someone who’s killing local pets. Given how much Sam is a shaggy dog of a human being, it feels more threatening and dread-inducing than it might to someone else. Then Sarah literally disappears. Sam goes down to find her one day and everything in her apartment is gone. His investigation into what happened to her, fueled by a zine he’s found called Under the Silver Lake about the underbelly of Hollywood, is the driving force of Mitchell’s film.

While “Under the Silver Lake” has neo-noir elements, obviously, it’s not exactly a thriller. Its darker qualities come with a heavy dose of slacker comedic sensibility—it’s the only movie you’ll see this year in which someone suspicious is trailed via paddleboat. Most of Mitchell’s tone comes with something of a wink and a nudge. When Sam dances to “What’s the Frequency, Kenneth?” by REM, it’s the kind of thing that’s both superficially ridiculous—as much as I love it, no one is playing that song at parties—and multi-layered in meaning in how the song is about a bizarre, inexplicable incident in which someone attacked Dan Rather of all people. It gets better when you find a quote from Michael Stipe: “I wrote that protagonist as a guy who's desperately trying to understand what motivates the younger generation, who has gone to great lengths to try and figure them out, and at the end of the song it's completely fucking bogus. He got nowhere.” He could be talking about the journey of “Under the Silver Lake.”

You see that rabbit hole we went down in the last paragraph? That’s the way I think we’re supposed to enjoy “Under the Silver Lake.” Every reference has layers of meaning, most of which are going over Sam’s head. As you might imagine, this can get exhausting. The first hour of “Under the Silver Lake” works on every level. The score, the camera framing, the tonal balance, Garfield & Keough—it all clicks. And then the film starts to come apart a bit because of its own conspiracy theories and narrative inconsistencies. It’s not unlike an actual conversation with a conspiracy nut, in that the first few theories are kinda fun but you’re looking for someone else to talk to by the time he gets to the hidden patterns in Vanna White’s eye movements.

Can a movie be both meandering and compelling? A lot of “Under the Silver Lake” feels like both, and one has to give Mitchell credit for taking the cache provided by “It Follows” and doing something this ambitious. There’s a fascinating idea embedded in “Under the Silver Lake” that suggests that if everything has a deeper meaning then nothing has the meaning we ascribe to it. Media and art mean nothing if they are just conduits for hidden messages. You know that song you love for its emotional power? It doesn’t mean what you think it means. It’s not the hidden truth of a world of conspiracies that would be so disheartening, but the realization that everything you believed was a lie. If that sounds like a lot for one film to bite off, you’re not wrong. (And Mitchell falters even more when one tries to figure out exactly what he’s getting at regarding the way young women are used and discarded in Hollywood.)

And yet I’m often willing to give a movie a pass for being too ambitious given how many others have no ambition whatsoever. “Under the Silver Lake” may not come together completely, but it’s the only film I’ve seen this year that reminded me of both David Foster Wallace and Raymond Chandler. A lot of movies throughout the year blend together in memory, but something tells me that “Under the Silver Lake” will stand out. I’m eager to see it again to pull it apart in different ways. It may not be an easy movie to sell to an audience, but it’s not an easy one to forget either. 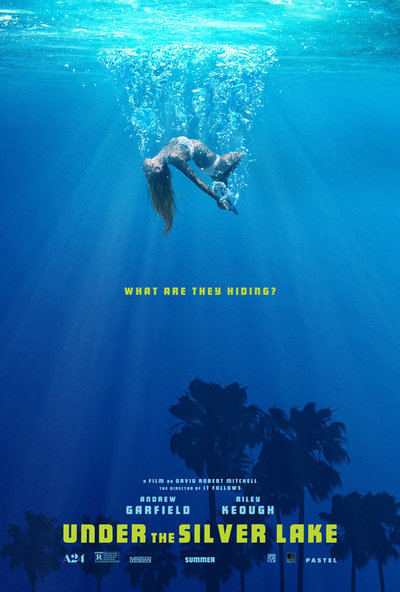 Rated R for strong sexual content, graphic nudity, violence, language throughout and some drug use.

Topher Grace as Man at Bar

Riki Lindhome as The Actress