Under the Eiffel Tower

Why is it so damn hard to make a successful romantic comedy? All you need is two likable people the audience wants to see walk off into the sunset together by fade-out. And yet, the clichés that poison this genre are repeated ad nauseum. Some examples: there’s a sense of male entitlement that can often err on the side of being a stalker. Or the plot throws in unnecessary issues designed to keep the lovers apart. Or, and this is my least favorite, the woman clearly should NOT be with this hideous creature and yet, she falls for him anyway. Filmmakers always overcomplicate what should be a simple matter and the result sinks like a lead soufflé. I’m starting to think that every rom-com is simply a remake of the awful one that preceded it.

With that said, “Under the Eiffel Tower” feels like déjà vu all over again. I was wary when I read the press release synopsis, fearing that the combination of Paris and a sad sack mid-life crisis White dude would be a retread of “Girl on a Bicycle,” a movie I called “the worst romantic comedy I’ve ever seen” on this very site. But this rom-com had something that excited me: it featured several cast members from the addictive HBO comedy “Veep.” Matt Walsh and Reid Scott star as the male leads in what looked to be a romantic love triangle involving a charming French woman played by the film’s co-writer Judith Godrèche. I love “Veep” so my hopes were suitably raised. Odie Henderson, you’re a fool.

This is a very bad movie that manages to be as insulting as it is stupid. Let’s start with Walsh’s character, Stuart. Stuart is a knowledgeable bourbon salesman who, in the film’s opening scene, is fired for “lack of passion.” Perhaps his boss meant lack of passion for the job, as Stuart is shown to have an unquenchable desire for the product he used to shill. As Stuart narrates, we see him downing bottle after bottle of Kentucky whisky and living in a house that, to quote my mother, probably “smells like foot and ass.” We deduce that Stuart has a mid-life crisis! The gods of bad cinema tell us that the cure is a much younger woman.

Enter that much younger woman. Rosalind (Dylan Gelula) is the daughter of Stuart’s married pals Frank (David Wain) and Tillie (Michaela Watkins). She sees Stuart as the cool uncle she never had, and he sees her as the niece who confides in him. Rosalind’s parents decide to pull Stuart out of his funk by inviting him to join them on an excursion through France. When Frank and Tillie get too embarrassingly parental, Rosalind jokingly invites Stuart to run off with her instead. She’s implying a “Lord of the Rings” style quest. Stuart’s thoughts lean more toward “Blame it on Rio.”

And so, in the titular location, Stuart suddenly pulls out a seven-thousand dollar engagement ring and proposes marriage to his “niece.” Rosalind is suitably disgusted—he’s older than her father! Dad and Mom are also repulsed and tell Stuart to take a hike. Cut to Stuart bawling in the airport on his way back home. It’s there where we meet the person Stuart was actually talking to in his narration, injured soccer player Liam (Reid Scott).

Liam looks like a romantic leading man sent C.O.D. from Central Casting. He’s fit, got a winning smile and is adorned with a sexy salt-and-pepper beard that looks groomed by Aphrodite herself. The guy looks pretty damn hot. And then he opened his mouth and the spell evaporated. “What a crappy fake Irish accent this dude has!” I yelled at the screen. I was sorely mistaken; the crappy fake accent is supposed to be Scottish.

The movie’s 15 minutes old and already we’re trapped with an increasingly unlikeable wuss of a protagonist and a guy who sounds like Sean Connery auditioning for Warwick Davis' role in the horror film “Leprechaun.” Since these two aren’t going to do each other (though Liam does broach the subject and I’m not so sure he was completely kidding), we need a lady. “Under the Eiffel Tower” brings us Godrèche’s Louise, who shares Liam and Stuart’s train car while enjoying a large bottle of wine. The duo endear themselves to her by first assuming she doesn’t speak English and sexually harassing her. When they find out she’s bilingual, Stuart continues his rapid descent into douchebag territory by insulting her taste in booze.

This is a Meet Cute folks! Louise gets off the train several stops before the guys were going to, and they follow her. She invites the men to a dinner neither of them can pay for, so Stuart uses his engagement ring as collateral at the restaurant. Louise has the good sense to leave her dinner guests and return home, but her good sense lasts about as long as this film’s goodwill. Through the first of many absurdly convenient plot twists and details—this film is one deus ex machina after another—Liam and Stuart run into Louise again. Soon, both men are vying for (and sampling) her affections while staying at her chateau, which is also occupied by a mysterious third man in a wheelchair, Gerard (Gary Cole).

You’ll be able to figure out how Gerard figures in Louise’s life long before Liam and Stuart do. I had less of a problem with that development than the way “Under the Eiffel Tower” turns Gerard into an offensively neutered doormat. I suppose his wheelchair status is excuse enough for him to be cuckolded (and be happy about it, no less, because according to this film, those folks can’t be sexual). But you have to ask yourself why you’d be expected to root for the guy doing this to him in a romantic comedy.

Had this movie been made in 4DX Bourbon-Vision, I would have enjoyed being squirted in the face with booze whenever a cliché was employed. Sadly, Bourbon-Vision doesn’t exist, so there’s no reason for you to see “Under the Eiffel Tower” unless you enjoy being tortured for 87 minutes. 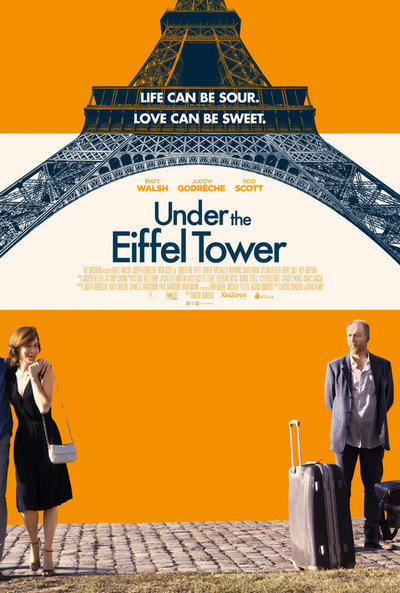