R.E.M.’s “Losing My Religion” plays over the end credits of “Tyrel,” but a better song would have been Peggy Lee’s “Is That All There Is?” I’ve seen far worse movies this year, but I’ve not seen one that left me feeling as indifferent and bored as this one. I was not enamored of writer/director Sebastian Silva’s last feature, “Nasty Baby,” but at least it wasn’t dull. In fact, it was quite jarring and that was part of its appeal. “Tyrel,” on the other hand, is so listless and dry that the only jolt of electricity I experienced was when the screener blew up seven minutes before the end. The half hour I spent fighting with the Magnolia Pictures website was more suspenseful and interesting than anything I saw in their product.

“Tyrel” sounds like a clone of “Get Out,” but despite having similar plot elements and a creepy Caleb Landry Jones performance that features wrestling, this film is nothing like Jordan Peele’s Oscar-winning scary satire. Here, a young Black man named Tyler (Jason Mitchell) goes to a party in the woods with his White friend Johnny (Christopher Abbott). To explain what happens next, allow me to quote the film’s press release: “As soon as they get there, it's clear that (1) he's the only black guy, and (2) it's going to be a weekend of heavy drinking. Although Tyler is welcomed, he can't help but feel uneasy in ‘Whitesville.’ The combination of all the testosterone and alcohol starts to get out of hand, and Tyler's precarious situation starts to feel like a nightmare."

Now, I’ve never been to “Whitesville,” but I’m a computer programmer and a film critic and therefore work in two professions that, to be blunt, are not exactly teeming with people of color. So there have been plenty of opportunities for me to be the only spot on the Dalmatian at social events and get-togethers. Considering that both professions are also lopsidedly male, these get-togethers quite often had combinations of “testosterone and alcohol.” So, my response to the microaggressions perpetuated upon Tyler by his drunk-ass White hosts and partygoers was a very loud “SO?!!” Was I supposed to, as a Black man, sympathize with Tyler’s predicament? I thought he got off easy, to be honest, and he even gets a chance to be as drunk and obnoxious as everyone else. The lack of true drama here made me callously apathetic. Because drunk guys acting obnoxious and making me uneasy equates to just another Saturday night in the world of your humble reviewer.

The list of party attendees sounds like a bad joke: A few Argentineans, some White guys, a Black guy and a gay guy walk into a cabin in the woods—and absolutely NOTHING happens. The party is for Pete (Jones), who admittedly is a bit weird but never crosses the line into full-fledged concern. Since Tyler doesn’t know any of Johnny’s friends, Johnny keeps checking in on him to make sure he’s comfortable and included. The guys do typically stupid twenty-something stuff like playfully mocking the queer gentleman (who returns their volleys without being offended) and acting overly macho. And they drink a lot, starting with hot toddies and working their way through all manner of brown liquors. Throughout this, Tyler feels somewhat out of place, opting to spend more time with the resident canine than his human cohorts.

Eventually, more White guys arrive, including Silva regular Michael Cera, whose oversized rabbit coat practically becomes another character. Cera bonds with Tyler in ways the others don’t, presumably because he zeroes in on Tyler and constantly drags him into the social circle. The booze flows freely over two nights, with the monotony only temporarily broken by a side visit to a saxophonist played by the late, great Reg E. Cathey (another Silva regular) and his wife, played by Ann Dowd. By the end of the film, the extremely hungover Tyler learns—I don’t know—how to survive Whitesville?

As the interminable minutes passed, I asked myself who the audience is for this movie, and what are they supposed to glean from it? Black viewers already know how Tyler feels, so this entire enterprise is redundant. Despite Mitchell’s committed performance, I can completely understand some White viewers finding Tyler antisocial and even blaming him for his own feelings of alienation and discomfort, because the worst fate that befalls him is a scene where he’s forced to talk “in a Black voice.” I’ve had far worse crap done to me in similar situations, so this stuff seemed minor. I mean, this is a film where the group R.E.M.’s music is used as a means to make Tyler feel uncomfortable because he doesn’t know the songs everyone else is singing. I admit that “Shiny Happy People” will make you want to shoot whatever media is playing it with a bazooka, but R.E.M. in general just doesn’t scream out “INTENSE RACIAL OPPRESSION” to me. Neither does anything in this movie. 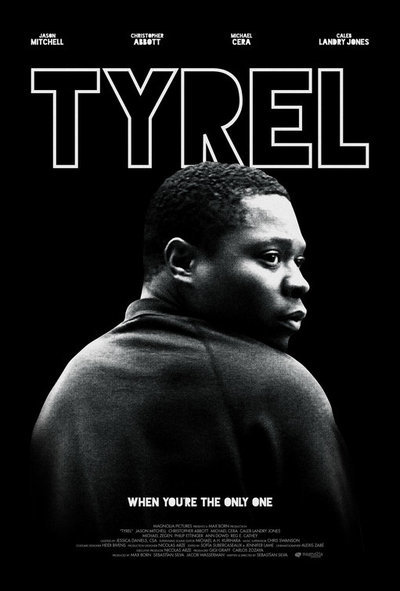