A few years back, when “Night of the Living Dead”-redolent zombie movies started popping up like, well, zombies, there was a joke among movie mavens who were past masters of the genre, to the effect of “Haven’t the characters in these zombie movies ever seen any…zombie movies? Because if they had, they’d know to shoot the zombies in the head. Problem solved.” I had a similar thought watching “Two Night Stand,” a slight but not-unengaging Young Person’s Romantic Comedy, at a point when the two main characters, charmingly played by Annaleigh Tipton and Miles Teller, discuss The Female Orgasm. “Haven’t these kids seen ‘When Harry Met Sally’?” True, it’s not difficult to imagine male millennials avoiding the Nora Ephron/Rob Reiner picture like the plague, but That Clip is sufficiently ubiquitous…

This is admittedly a minor quibble. It’s not even really a quibble. However, it’s not an entirely great sign about a movie’s precise level of engagement when such thoughts occur. Take that as you will. Written by Mark Hammer, who also wrote for the MTV Young Person’s Edgy Lifestyles series “Skins,” and directed by Max Nichols, whose prior screen credit is a small role as a child actor in Milos Forman’s “Ragtime,” “Two Night Stand” gets off to a somewhat rocky start in establishing its 21st-Century-Zeitgeist bonafides. "Montage of Quirkily Attractive Young Woman Prevaricating Over The Details Of Her Online Dating Profile, Complete With CGI Balloons Depicting Instant Messaging Dialogue"? Check. "Personal Observations Buttressed With Knowing Pop Culture References"? Check. (Sample: Tipton’s character, a breakup victim who’s been taking it hard on her sassy roomie’s couch, notes of her current existence, “I’m going backwards…I’m Benjamin Buttoning!”) “You Live In BROOKLYN? Joke Directed At A Potential Sex Partner?" Check.

Tipton’s Megan impulsively hooks up with Teller’s Alec; hostilities and misunderstandings ensue after the deed is done and she’s looking to make a getaway, but the getaway’s impossible because a blizzard has socked New York City and the now-resentful duo is snowed in. (Michael Showalter’s TV-screen bit part as a “wacky” weatherman is broad but not undiverting.) This is where the movie settles in and gets interesting, as the two discern an opportunity for complete honesty in the current situation. It’s not “Sexual Perversity In Chicago,” nor is it meant to be, as romantic comedy convention calls for a cessation of hostility at some point. Tipton and Teller, neither of whom is conventionally glamorous, mesh well together, and Nichols keeps their exchanges brisk and makes the most of the limited cinematic space the scenario demands he work with. (And yes, the gentleman is more than a bit player in “Ragtime;” his father is Mike Nichols, a director who’s handled his share of iconic rom-coms—“Working Girl,” “Heartburn,” “Who’s Afraid of Virginia Woolf,” that sort of thing.) Where the movie loses what oomph it has is in the cutaways to the ostensibly high-style canoodlings of Megan’s roomie and her boyfriend, which look like outtakes from a particularly dopey CW sitcom, and of course the commit-cute finale in which the "Meant For Each Otherness" of it all is asserted.  Such scenes always involve more than a modicum of contrivance, as in the airport-gate-slow-clap scene; in any event, this one sets the "Big Realization" on New Year’s Eve, which suggests writer Hammer has seen “When Harry Met Sally” even if his characters haven’t. 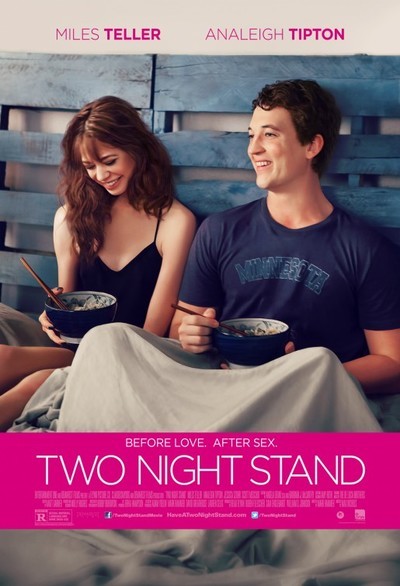 Rated R for sexual material, language and some drug use