"Two Jacks" is a story told in two distinct, and distinctive, halves. The first half takes place in a twilight sort of Hollywood of twenty or so years ago, where most of the women are strangely dressed like 1920s flappers, and it is filmed in color that has been so drained that it almost looks like black-and-white. Old school Hollywood director Jack Hussar (Danny Huston) has just returned to LA from location shooting in Africa, where his latest movie has run out of money. Stranded at the airport, Jack falls in with Brad (Dave Pressler), an awkward but ambitious would-be producer who tries to help Jack secure some money to finish his picture.

Jack is clearly modeled on filmmaker John Huston, the father of Danny and the grandfather of Jack Huston, who plays Jack Hussar's son in the second half of "Two Jacks," so this is very much a Huston family affair. When people talk to Jack Hussar about his movies, they keep mentioning a title that sounds like "Haunted Sphere"—or is it "Haunted Spear"? A cop who pulls Jack over for speeding calls this movie "Mystic Spear," and this is a telling example of how director-writer Bernard Rose keeps the details here deliberately vague and dreamy. This is Rose's fourth movie based on a Leo Tolstoy source, but the Hollywood milieu he has chosen takes him fairly far away from any existential Russian agonizing.

Danny Huston doesn't mimic his father's distinctively full-throated, courtly way of talking directly because he doesn't need to; he has his roguish father in his eyes, in his stance, in his bones. "Two Jacks" makes it very clear that Jack Hussar is not a lovable rogue. He leaves hotel bills unpaid. He travels with a large and destructive dog named Orso who likes to rip apartments to shreds. He doesn't particularly care about making movies, but he does love the adventure of shooting them in difficult locations.

Worst of all, he has no love or affection for the beautiful women who keep falling into his lap. Hussar discards them cruelly, as if they are just napkins to wipe his hands on. But he leaves an impression on a young British hopeful named Diana (Sienna Miller), so much so that the older Diana (Jacqueline Bisset), is still thinking about Jack many years later.

There is a lot of inspired casting here, for Miller and Bisset are similar both in looks and in attitude, tense beauties who often seem unsure about how to present themselves to the camera. "Two Jacks" switches to its modern-day story in full color about fifty minutes in, and the contrast this makes with the first story is quite effective. More films should toy with the idea of telling one story for forty-five minutes or so and then moving on to a related story set in a different time period for the second half.

Jack Huston, who speaks with a British accent and plays Jack Hussar, Jr. as irresponsible but basically nice, is far enough removed from his grandfather John in looks and demeanor that Rose's overriding theme about changing mores in Hollywood is emphasized just through casting alone. "Two Jacks" is finally more of a curiosity than a viable dramatic event, but its bringing together of Danny and Jack Huston in a pair of tales related to their filmic legacy makes it a pungent if small addition to the legend of the Huston family. 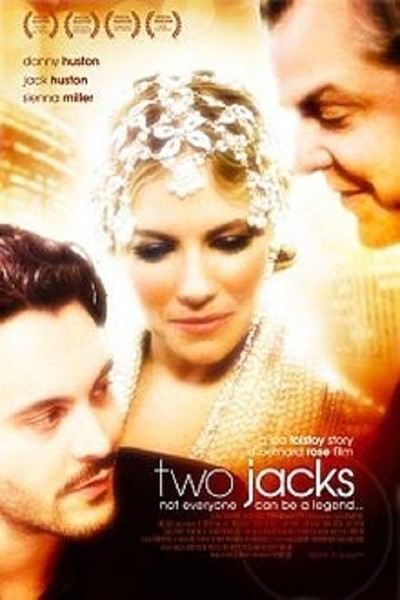