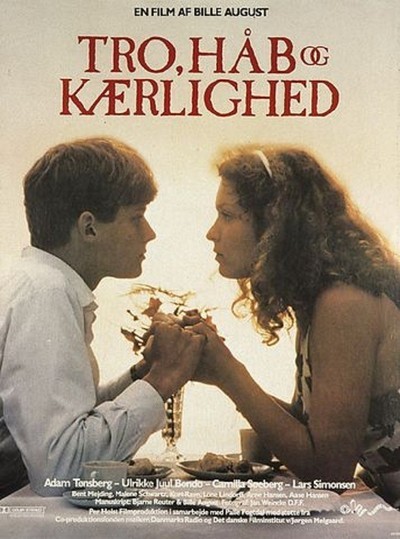 "Twist and Shout" is a Danish film that takes place just at the moment when the Beatles became an overnight sensation all over the world. In the tacky little village hall of a small Danish city, a quartet of would-be Beatle look-alikes sing songs they have learned from records.

And in the men's room, the boys pause before the mirrors, torn between their elaborate ducktails and the shaggy new Beatles look.

We know what will happen next. The eyes of a boy and a girl will meet across the dance floor, and there will be instant love. But "Twist and Shout," which is the most popular film in the history of Denmark, isn't simply a teenage love story; it's much deeper and more serious than that.

We meet two teenage boys: Bjorn, who wants to play in a rock 'n' roll band, and Erik, whose youth has been overshadowed by all of the secrets of his homelife, where his tyrannical father keeps his insane mother hidden away in a bedroom.

Erik loves Kirsten, a rich girl with perfect teeth, a hairsprayed bouffant, and a mind whose empty spaces occasionally are disturbed by gusts of jealousy. Kirsten does not love Erik; she's too much of a snob to deal with his sick mother. No, she loves Bjorn. But Bjorn loves Anna, a frizzy-haired, natural-looking young woman who is funny and warm and loves him, too.