To paraphrase Bill Murray’s famous line from “Tootsie,” the long-delayed “Tulip Fever” is one nutty 17th century melodrama. It offers curious viewers a very horny, “Titanic”-esque forbidden romance, a subplot involving someone pretending to be pregnant for nine months, and then juxtaposes that with in-depth sequences about the tulip trade in 1600s Amsterdam. There are numerous, ridiculous twists that “Tulip Fever” delivers with a completely straight face, and it's all dressed up with a moody Not Your Usual Period Film look. But “Tulip Fever” reveals itself to be so nutty because it explicitly believes it’s not crazy, rambling through its odd events and obsessions without an ounce of 17th century kitsch.

Alicia Vikander stars as Sofia, an orphan who was essentially purchased by a wealthy widower named Cornelis Sandvoort (Christoph Waltz) to become a baby factory, but has failed that horrifying purpose for the last three years. Unprotesting, she becomes imprisoned by the shame of not doing what she was expressly made to do, praying with her husband while looking miserable during any of their attempts to conceive. It’s a strong contrast to the true, actually sexy love experienced by housekeeper Maria (Holliday Grainger) and the handsy fishmonger Willem (Jack O’Connell), who heat up the kitchen with dry humping and whatnot.

One day, Cornelis hires a struggling painter named Jan Van Loos (Dane DeHaan) to create a portrait of him and his wife, a type of way to build legacy while waiting for Sophia to give him an heir. Jan and Sophia quickly fall for each other, which leads to DeHaan glaring at Vikander, then some movie-ready love-making and also a shared obsession that might soon get them found out by Cornelis. When Willem suddenly disappears (comically fast) and Maria is mortified to find out that she’s pregnant, Maria and Sophia create a plan to benefit each other’s needs, while eventually cutting Cornelis out of the picture. Sophia will just stuff a pillow under her dress for nine months while Maria carries a baby that Cornelis thinks is his. It's a ridiculous, incredibly fallible scheme and the movie never acknowledges that.

Oh yes, the tulips. In this movie’s time period, tulips have become a hot commodity, for ways mentioned in a visually intricate animated opening sequence, but lost within the numerous boisterous scenes where characters are bidding on bulbs in a sweaty hall that looks like a brothel. But various characters in this story get caught up in the business that provides both opportunity and heartbreak, in a way that is indeed original but muddled.

This also doesn’t include other characters, who have their own appearances that make “Tulip Fever” even stranger. Tom Hollander plays a creepy but genuinely helpful OBGYN named Dr. Sorgh; Zach Galifianakis is Jan’s sidekick, expressly used for glaring comedic beats about his character being clueless or drunk; even Judi Dench appears in this movie as a nun who manages the orphanage that provided Sophia and now grows flowers. Keeping in check with this film's strange way of using people, Dench is hardly on screen despite giving an emblematically stoic performance.

Director Justin Chadwick’s film feels narratively busy but moves slowly, struggling to make much sense in the process. Despite Chadwick’s clear investment in honoring the hormones of a stuffy period (like “Hysteria” before it) and in putting a spotlight on the history of tulip trading, the story never comes together. Instead, it drags you one way, and then another, and often clumsily bridges over missing narrative beats with goofy ADR or making you catch up.

As the contemplative and frozen Sophia, Vikander channels the presence she had in “Ex Machina” where she played an android understanding her actions and wanting to break free. It’s a sincere performance as someone trying to find happiness, and makes you realize how perfect she’d be in the domestic imprisonment of a Douglas Sirk-style drama (which “Tulip Fever” tries to be the 17th century version of, in a way).

But the true MVP for this film’s motley crew of relatively earnest performances is Waltz, who creates the story’s one ambitious idea that works in the movie’s favor. His Cornelis character is a babbling cuckold who’s given a montage that documents his bedtime urinating habits, and refers to his penis, self-deprecatingly, as a “little soldier.” And yet Waltz is so intricate in this role that he comes off as more pathetic, if not sympathetic, than his misogynist ever should. In turn, it kills the romance underneath Sophia, Maria and Jan's scheme. The story just does not have the nuance to explore the ideas of cruelty and shame that are underneath many of the character’s actions.

Chadwick continues to treat period pieces as more then ornaments, and there’s some blood pumping in this movie even visually. The usage of handheld camerawork during intimate moments goes a long way to create an immediacy for stuffy period, especially as everything happens in creaky rooms splashed with daylight. And for a movie that relishes the drab surroundings of Amsterdam and its inhabitants, it’s a movie that has a clear ability to visually pop, like the creamy, pure colors of the tulips or the blue dress that Sophia wears as an sign of being a walking dream.

But Chadwick’s strong grasp on visual tone doesn’t benefit the narrative. “Tulip Fever” eventually hurls itself into a semi-amusing void of feeling like it came from another planet, one where everyone is too crazy of a romantic for their own good, and tulips are God. Is this story a sexy, star-crossed romance? A cruel tragedy about really dumb people? A very, very dry comedy? It is all plausible with “Tulip Fever.” But however you want to engage it, the film wilts right before your eyes. 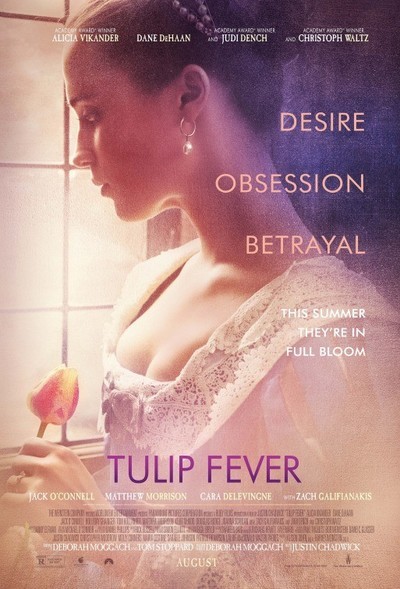 Judi Dench as The Abbess of St. Ursula