Harry Wootliff's second feature, "True Things," with Ruth Wilson and Tom Burke giving two riveting performances, isn't really an "erotic thriller," although that term is being bandied about as a descriptor. Yes, there's a lot of sex in it, and yes, the mood gets very dark. But there isn't really a "thriller" aspect to the film, not unless you consider a woman falling apart to the point of madness as "thrilling." Nobody is revealed as a killer, bunnies are not boiled. The gravitas of the situation is psychological. Sex is an attention-getter, and that may be more evident than usual in a mostly sexless cinematic landscape.

Sex might get everything started in "True Things," and may be the primary destabilizing force (as it often is in real life), but the real subject of "True Things," the source of every event onscreen, is loneliness, the damage loneliness can do. As Douglas Copeland once wrote: “Forget sex or politics or religion. Loneliness is the subject that clears out a room.” Being lonely, and admitting to being lonely, is the real taboo.

Kate (Wilson) works as a benefit claims officer, and her job consists of interviewing mostly angry people about their various claims, telling them they need to come in with the proper paper work. Temper tantrums ensue. When she's not working, she scrolls through Tinder, in a fugue state. She's so unenthusiastic about her job she's on thin ice with the boss and with her friend (Hayley Squires) who got her the job. Then one day a guy (Tom Burke) sits down at her desk to go over his claim. His hair is dyed blonde, he just got out of prison, but most striking is his rakish grin, a grin directed right at her with a weird mischief, like the two of them share a secret. She topples like a house of cards. He's waiting for her outside after work, and in less than five minutes, they're having standup sex in a parking garage. She doesn’t even know his name. We never learn his name. She puts his number into her phone under the name “Blond."

Erica Jong wrote a whole book about this particular kind of thrill. Kate isn't just into it, or him. She needs the high he provides. He's so easily intimate with her, displaying unexpected moments of kindness, as though they are an established couple. When she bumps her head against a cement column during their first sexual encounter, he stops and says, "You okay, love?" He comes on strong, but not in a villainous way. She's obviously very receptive. In what feels like a matter of a week, Kate has disintegrated, because, of course, Blond is intimate and fun, but he is also mercurial and manipulative, he runs hot-and-cold, he calls her a "soulmate" and then pulls back quickly. In textbook fashion, this unpredictable behavior makes her need him even more.

This may be frustrating for some. He's so clearly "bad news"! Yes, but he's bad news with a rakish grin. The rakish grin is very important! He is also into her in a disarmingly upfront way, so different from the guys she's set up with, who talk about their jobs and forget to ask her about herself. (One of these dates ends horribly when Kate tries to push the guy into more Blond-like behavior, just so she can get her fix. It's excruciating.) Desire, sex, needs finally fulfilled, waking up with someone next to you in bed, all of that can mess with a lonely person's radar, and Kate's radar is already damaged when the film starts. Her work friend, who has clearly counseled Kate through many bad relationships in the past, asks her in exasperation: If you want to "settle down," then why are you wasting time with this Bad Boy?

Wootliff adapted Deborah Kay Davies’ best-selling novel True Things About Me, and he has left a lot of space in the narrative. Who Kate is, and how she experiences the world, is central. Wootliff prioritizes her completely, pushing the camera up against her face, trying to capture every thought that flickers by (as well as the harrowing sequences when thought is no longer possible). The filmmaking is highly subjective, with great work done by cinematographer Ashley Connor, bringing us into Kate's fever dream. Light fractures or melts across the screen: sometimes the light is warm and golden, like during the couple's day-trip to a pristine lake, but sometimes the light is hard and icy, falling down around Kate in shards.

None of this would work without the tremendous performances of both Wilson and Burke. Wilson optioned the rights to the novel, and was also a producer on the film. Her understanding of the material—of Kate's descent into debilitating depression and anxiety—is acute. A story like this needs total honesty. Wilson brings it. She's painful to watch at times, but she also draws you into her world, making you see what she sees, feel what she feels. This is crucial.

Tom Burke, so terrific in Joanna Hogg's "The Souvenir" and "The Souvenir Part II," turns in another revelatory performance. You could call Blond a jerk, and you wouldn't be wrong, but it makes sense why Kate would fall for the guy (especially when you consider she's been living in a permanent state of perhaps depression-inducing loneliness for years). Along comes this guy who sees her, perceives her, encourages her to play hooky from work, introduces fun and pleasure into her world. Blond is maddening, but Burke makes him make sense.

There are moments where you can see Kate trying to make more of this "relationship" than it is, almost like she's trying to convince herself that this could be It, he's the one. She tells her parents she "met someone," and then bristles with irritation when they ask excited questions. In her great book The Lonely City, Olivia Laing wrote, “What does it feel like to be lonely? It feels like being hungry: like being hungry when everyone around you is readying for a feast. It feels shameful and alarming, and over time these feelings radiate outwards, making the lonely person increasingly isolated, increasingly estranged.”

This is exactly what happens to Kate over the course of "True Things." Loneliness is not generic. There's a kind of loneliness experienced by someone who wants more than anything else to find a partner, who begins to realize at a certain point it may very well not happen, who finds weddings and baby showers excruciating. People who express these feelings are often called immature, bitter, jealous. There's a lot of shame associated with it.

Kate's rapid disintegration has very little to do with Blond, of course. He's a catalyst, a long-desired "love object" on which to shower the attention she's always wanted to give. If Kate were in a healthier state mentally, she would have treated Blond as a super-fun occasional hook-up, and none of this would have happened. Wootliff navigates this thorny landscape with expertise, keeping the film grounded in details and sensory reality. For those of you who miss films made by adults and for adults, films which treat things like sex and loneliness with respect and honesty, "True Things" isn't to be missed.

Now playing in theaters and available on VOD and digital platforms. 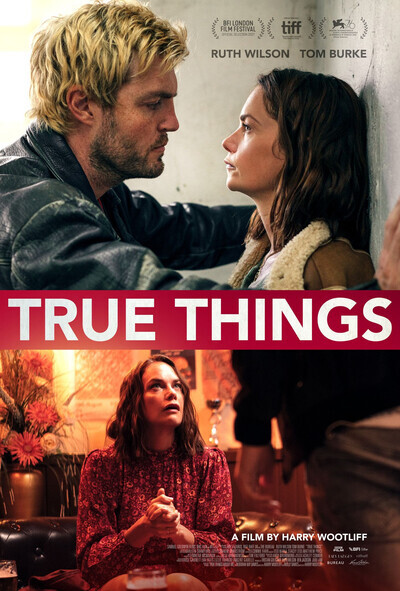