There are movies about ugly, vile people, and there are ugly, vile movies. “Triple 9” is the latter.

Turning his interest in macho nihilism that he explored more effectively in “The Proposition” and even the flawed “Lawless” to bank robbers and the Russian mob, director John Hillcoat again assembles a stunning cast of household names and proceeds to waste almost all of their talents on an under-lit, increasingly ridiculous, generally ineffective dirty cop movie. It is a film that cribs openly from Michael Mann and Sidney Lumet without understanding what really makes either director work. Occasionally, the overwhelming talent of the cast will elevate the material, but not nearly enough to shake the feeling when it’s done that you could use a shower.

The best scene in “Triple 9” is arguably its first real set-piece, the robbery of a downtown Atlanta bank by former special ops mastermind Michael Atwood (Chiwetel Ejiofor), dirty cop #1 Marcus Belmont (Anthony Mackie), dirty cop #2 Jorge Rodriguez (Clifton Collins Jr.), getaway man Russel Welch (Norman Reedus), and his brother Gabe (Aaron Paul), a character who might as well being wearing a red shirt and named “Future Liability.” Hillcoat and cinematographer Nicolas Karakatsanis (“The Drop”) frame the bank robbery beautifully, taking us from the high-pressure of the vault to the getaway gone wrong after a red dye pack explodes. It’s tense, well-shot and sets up the audience for a high stakes thriller that never comes.

It turns out the quintet wasn’t there for the money—they were tasked with stealing a very specific safety deposit box by Russian mob mastermind Irina Vlaslov (Kate Winslet), who is now refusing to pay the group until they perform another job. Irina has control over Michael because Michael has a son with Irina’s sister Elena (Gal Gadot) that the Russians are basically holding hostage, not allowing his father to see him. This plot thread is not only poorly-developed, it’s a little morally grotesque in that it feels designed to create sympathy for someone who should be a villain, especially when we learn what the title means.

If you don’t know, 999 is the code for “officer down.” In their planning of the second heist, which involves a Homeland Security building, the group decides that the best way to distract the rest of the force will be to kill a cop. As they say, every car responds to a triple nine. And they’ll all be distracted enough to not be able to respond to the new heist. Conveniently, Marcus gets a green new partner in Chris Allen (Casey Affleck). They’ll set up Allen to get killed, and pull off one final job for Irina while the city is descending on the crime scene. They never bother to consider that Allen’s uncle (Woody Harrelson) is leading the investigation into who they are. Or that the increasingly unstable Gabe is a problem. Or that their entire plan is based on a lot of coincidences and plot holes that we only see in movies.

Most of “Triple 9” is shot in close-up and near-total darkness. Hillcoat and Karakatsanis mistakenly think that this will compensate for a lack of character or plot worth caring about. So, we get sweaty, dirty, grimy camerawork, under-lit to a nearly-parodic degree, but none of it resonates beyond showy filmmaking. The film is constantly calling attention to its visual style (or lack thereof) because there’s so little else on which to focus. Despite casting so many talented people, writer Matt Cook and Hillcoat give them almost nothing to do. They are cogs in a plot machine with nothing notable about their characters or back stories outside of the descriptions you read above. Michael has a kid. Gabe is the junkie. Chris is the new guy. That is it. If Hillcoat is trying to say anything about macho male behavior, the police force, capitalism, or even the Russian mob, he fails to do so.

The forgettable thinness of the characters is problematic throughout but especially in the final act when one realizes you just don’t care about these people or what’s going to happen to them. If one subscribes to the theory that people can learn as much from a bad movie as from a good one, watch the scenes between two of our best actors—Kate Winslet and Chiwetel Ejiofor. Neither have the depth of character or artful purpose that these two have brought to films before. And so their relationship, one of the defining ones of the film, has no resonance at all. To be fair, Anthony Mackie has so much natural charisma that it shines through every now and then and Casey Affleck sometimes looks like he’s aware of the better film in which this character could play a crucial role. It’s also worth noting that when character has to take a back seat—in a few action sequences, including a riveting gang shoot-out, the movie works. It’s when dialogue and an increasingly-ludicrous plot kicks in that the movie fails in head-shaking ways.

Every talented cast member will move on from the errors of “Triple 9” and on to bigger and better things. Most of them have already. Follow their lead. 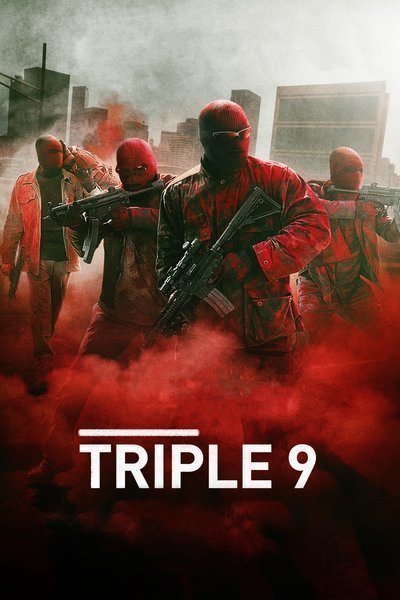 Rated R for strong violence and language throughout, drug use and some nudity.