Horror fans are very forgiving. As long as we’re not bored, we often overlook the flaws of a genre film. Patrick Lussier’s “Trick” really tests this theory. Sure, I was never bored, but this movie makes zero sense, and contains some shockingly bad filmmaking, acting, writing ... pretty much everything. It is remarkably grisly and violent, containing a body count that tops the double digits, and almost all of the victims of its quality kills see their insides before they die. In an era in which “elevated horror” often means low body counts, it may thrill you just to see an old-fashioned slasher pic in which dozens of people die in bloody, violent ways. Sadly, that’s about all you’ll get here, and if you think about the logic of its goofy narrative, or what its cheap final act is possibly trying to say, you’ll just get a headache.

“Trick” opens during a Halloween party, at which a young man with a pumpkin mask suddenly goes crazy. He starts violently stabbing other party goers, and he’s only stopped when one of them fights back and jams a poker through the perpetrator’s chest. At the hospital later, we meet Detective Mike Denver (Omar Epps), who’s the officer assigned to this horrific case. The title refers to both the season, the art of illusion, and the nickname of the vicious murderer, Patrick ‘Trick’ Weaver (Thom Niemann), who seems downright catatonic before he bursts from his hospital bed, kills a few more people, takes a few bullets from Denver Sheriff Lisa Jayne (Ellen Adair), falls a couple stories out a window, and disappears into the night. Badly injured and shot, Jayne and others are convinced Trick must be dead.

As you might have guessed, Trick returns next Halloween—there’s no movie otherwise—and another gruesome onslaught goes down. Every year, Trick comes back and unleashes slasher hell, infuriating authorities and basically driving Denver crazy and off the force. How does he keep evading the authorities? Why does he keep returning? Is it really Patrick or a copycat? The returning versions of Trick almost seem supernatural—could he be more than human? “Trick” plays with all of these questions, but it’s really just interested in separating body parts and, hopefully, creating a new slasher icon who could support a franchise.

He can’t quite do that (although worse movies have ended up producing sequels so I make no promises). While I admire Lussier for trying to rekindle interest in the slasher genre—and the playfulness in casting horror icons like Jamie Kennedy and Tom Atkins is a plus—he can’t quite handle a truly ridiculous script that he co-wrote with “Jason X” scribe Todd Farmer. The dialogue and plotting here is so over-the-top that “Trick” is really one tiny rewrite away from “Scary Movie” territory, and I’m not 100% convinced it wasn’t originally conceived as a parody of slasher movies before becoming one itself. It’s a film that doesn’t just require suspension of disbelief—like a lot of these movies, all police officers here have to be the worst shots in their departments to miss Trick every single time—but ends in a series of twists that are increasingly stupid, especially the one that tries to graft concerns about internet culture and anti-heroes like “Joker” into the story in a way that makes Todd Phillips’ film look subtle.

Worst of all, the filmmaking here traffics in faux intensity. The camerawork gets shaky every time Trick unleashes his fury, resulting in a film that’s more incoherent than terrifying, and Lussier thinks cranking up the score will add to the fear when it just makes his movie louder. With so much horror that seems designed to work psychologically, I believe the time is right for another resurgence in the physical, blunt world of the slasher genre, but “Trick” seems intent to prove me wrong. 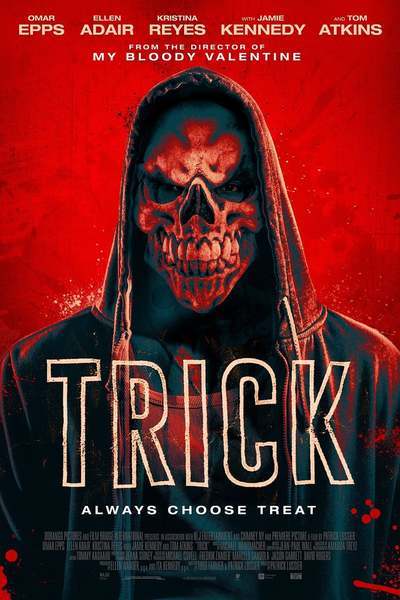